Embed This Infographic [Source: Today I Found Out]

END_OF_DOCUMENT_TOKEN_TO_BE_REPLACED 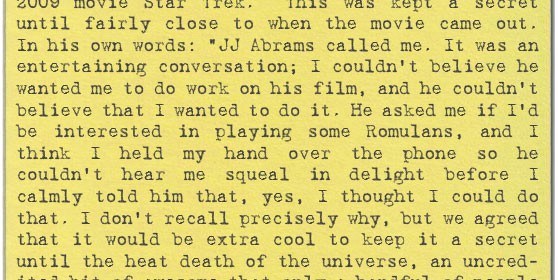 ##EMBED## Wil Wheaton did voices for various romulans in the 2009 movie Star Trek.  This was kept a secret until fairly close to when the movie came out.  In his own words: “JJ Abrams called me. It was an entertaining conversation; I couldn’t believe he wanted me to do work on his film, and he couldn’t believe that I wanted […]

END_OF_DOCUMENT_TOKEN_TO_BE_REPLACED 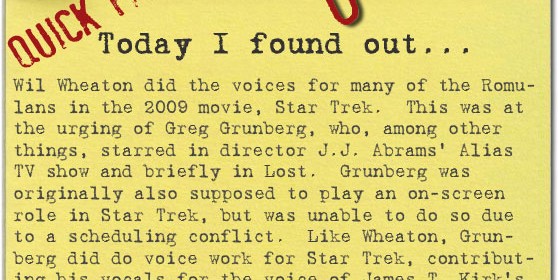 ##EMBED## Wil Wheaton did the voices for many of the Romulans in the 2009 movie, Star Trek.  This was at the urging of Greg Grunberg, who, among other things, starred in director J.J. Abrams’ Alias TV show and briefly in Lost.  Grunberg was originally also supposed to play an on-screen role in Star Trek, but was unable to do so […]