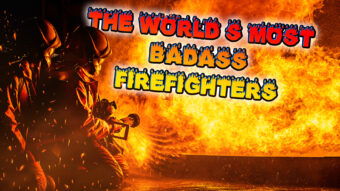 On August 2, 1990, Iraqi dictator Saddam Hussein launched an invasion of his southern neighbour Kuwait.100,000 troops surged across the border, quickly overwhelming the tiny Kuwaiti army of only 16,000 men. After a mere two days’ fighting, Saddam announced that Kuwait had ‘ceased to exist.’

Iraq claimed the attack was motivated by Kuwait’s economically aggressive behaviour, such as slant-drilling across the border into Iraq’s Rumaila oil field and exceeding its OPEC production quotas, driving down the price of oil. Western analysts, however, suspected that true motivation for the invasion was Iraq’s inability to repay loans obtained from Kuwait to fund the 1980-1988 Iran-Iraq War. But whatever the motivation, the invasion was roundly condemned by the United Nations, who demanded Iraq’s immediate withdrawal from Kuwait. When this demand was ignored, the UN approved the formation of a 34-nation military coalition led by the United States, which on January 16, 1991, launched Operation Desert Storm. What followed was one of the swiftest and overwhelmingly decisive military campaigns in history. Coalition aircraft dropped some 88,000 tons of bombs on Iraq, destroying much of its air force and military infrastructure in one fell swoop. This was followed on February 24 by a massive ground campaign, before which Iraqi resistance quickly crumbled. A mere 3 days later Saddam ordered the withdrawal of his troops from Kuwait, and the country was declared liberated.

But for the people of Kuwait, their troubles were far from over. In a final act of revenge, retreating Iraqi troops blew up and set fire to some 750 oil wells, unleashing one of the greatest environmental disasters in modern history. Vast swathes of the Kuwaiti desert were transformed into a scene straight out of Dante’s Inferno. Giant plumes of noxious black smoke billowed into the air, blotting out the sun and plunging the landscape into perpetual night. Burning oil stained the sand jet-black and poured into hundreds of giant flaming lakes, while unburnt oil and soot fell back to earth as toxic black rain, coating birds and other wildlife and polluting vast stretches of shoreline. And across this scorched landscape hundreds of bright orange pillars of flame rose as high as 100 metres into the air, burning up over 5 million barrels of oil and 100 million cubic metres of natural gas every, single day. Given the vast oil reserves beneath Kuwait, experts estimated the fires could burn for up to a decade. And the danger to humanity went far beyond Kuwait’s borders; scientists like Carl Sagan predicted that smoke rising into the stratosphere could more or less blot out the sun, creating conditions similar to a so-called “nuclear winter” or the 1816 eruption of Mount Tambora, which had inflicted upon the world the “year without a summer.” It was clear to all that the fires had to be put out as quickly as possible – whatever the cost. And so in March of 1991 the military coalition was followed by a civilian one as 10,000 oil field firefighters from 37 countries descended upon Kuwait in a massive mobilization known as “Operation Desert Hell.”

The task facing the firefighters was a daunting one. Oil well fires are notoriously difficult to put out – so difficult, in fact, that nations have had to resort to truly desperate measures to extinguish particularly stubborn wells – including nuclear weapons. And for more on that, please check out our previous video “That Time the Soviets Tried to Extinguish a Fire With a Nuke For…Reasons.” Thankfully, the Kuwaiti mission included the best oil well firefighters in the world, including the legendary Paul “Red” Adair. A legend in the field, the then 76-year-old Texan had practically written the book on oil well firefighting, and helped to put out some of the toughest oil fires in history, including the 1962 “Devil’s Cigarette Lighter” in the Algerian desert and the 1988 Piper Alpha oil platform in the North Sea. So badass were his exploits that he was portrayed by none other than John Wayne in the 1968 film Hellfighters. In addition to Adair’s company, the Kuwaiti coalition included fellow Texas firms Boots and Coots and Wild Well Control, Canadian company Safety Boss, California construction firm Bechtel, and teams from France, Hungary, China, Iran, Russia, the UK, and Kuwait itself. In total, 27 teams worked to fight the fires, each bringing a unique set of skills, equipment, and techniques to the assault.

The firefighters’ jobs were made especially difficult by the recent conflict, as thousands of land mines and unexploded munitions lay scattered about the oil fields. Military explosive ordnance disposal teams spent weeks clearing the area before the firefighters could even approach the wells. In order to move their heavy equipment close to the fires, the firefighters used clay mined from a nearby quarry to build a vast network of roads atop the slick, oil-covered sand, one leading to each wellhead. The next challenge was bringing water to the site. Hundreds of pipelines which once carried oil from the wellheads to the coast were repurposed to carry millions of litres of seawater from the Persian Gulf to the oil fields. A constant spray of water cooled the air and ground surrounding the fires, allowing the firefighters to get close enough to begin their assault.

Each fire had its own personality and quirks, and required a unique plan of attack. In many cases the wellheads were surrounded by the tangled remains of oil derricks or pipelines or giant volcano-like cones made of charred oil residue. These were blasted away using barrels of C4 plastic explosives, placed near the wellhead using long booms mounted on bulldozers. Once the obstructions were cleared, around 90% of the wells were extinguished using nothing but torrents of seawater, with Canadian firm Safety Boss dousing 180 wells this way – more than any other team.

Some fires, however, proved rather more stubborn, and required more unusual techniques to subdue. One of the most popular was the “stinger”, a hollow steel spike fitted to the end of a bulldozer-mounted boom. This was plunged into the throat of the burning wellhead and heavy drilling mud pumped through it to smother the flames. Another, even simpler device was the Venturi tube, a simple vertical length of pipe placed over the wellhead. Though typically used on hotter, gas-rich fires to raise the flame column away from the firefighters, under certain circumstances the Venturi tube could be used to put out the fire itself. This was done by gently tilting the tube, momentarily separating oil from fire. A more extreme method, popular among the Texas teams, was putting out the fire using dynamite. While this might seem counter-intuitive and one of the more literal interpretations of “fight fire with fire,” there is actually method to this madness. Unlike low explosives like gunpowder, high explosives like dynamite and C4 do not burn but rather detonate, creating a powerful blast wave that can snuff out the flaming oil like blowing out a candle.

But perhaps the most extreme firefighting technique belonged to the Hungarians, who brought along a bizarre vehicle they dubbed Big Wind. This consisted of a turretless Soviet T34 tank with a pair of Tumansky R-25 jet engines from MiG-21 fighter jets and six water nozzles strapped to its hull. Big Wind, true to its name, produced a blast of air powerful enough to put out even the most stubborn fires, and in this manner extinguished 9 wells in 43 days. Whatever technique was used to extinguish the flames, the next step was to cap and seal the well, a process known in the oil industry as snubbing. After the original damaged wellhead pipe was cut away using a high-pressure water jet, a new valve assembly or snubber was bolted in place. The valves in the snubber were then closed using pneumatic pressure, sealing off the well.

The work was long, hot, and fraught with danger, the firefighters working up to 12 hour days within metres of flames exceeding 1,000 degrees Celsius. The air was filled with toxic smoke and soot, making breathing difficult, and unburnt oil raining from the sky coated the workers head to toe. A sudden shift in the wind could inflict serious burns, while oil and gas spewing out of extinguished wells threatened to reignite at any moment. Yet despite these dangerous conditions, not a single firefighter was killed or seriously injured, and the extinguishing rate gradually rose from 1 well every 10 days to nearly 2 per day. Finally, on November 16, 1991, the last well was extinguished and capped. Start to finish, Operation Desert Hell had taken only 9 months – far ahead of the 5 years some experts had predicted. In that time, some 1 billion barrels of oil had gone up in smoke – nearly a quarter of Kuwait’s total estimated reserves and nearly twice as much as the next largest oil spill, the 2010 Deepwater Horizon disaster in the Gulf of Mexico. Incredibly, even this staggering amount translated to only 11 months’ worth of global oil consumption.

But while the international firefighting team celebrated a job well done and withdrew from the country, the Kuwaiti people were left with the enormous task of cleaning up and reclaiming their devastated land. The fires, along with 4 million barrels of oil dumped into the Persian Gulf by Saddam in a desperate attempt to halt Coalition naval forces, had contaminated some 40 million tons of soil and 1200 kilometres of shoreline, poisoning thousands of seabirds and 500 tons of fish. Millions of Kuwaitis also suffered severe respiratory problems due to the smoke and soot and a myriad of other health problems related to polluted water. About the only silver lining was that the global climatic impacts predicted by Carl Sagan and others failed to transpire, for not enough of the smoke reached the stratosphere to have the feared cooling effect. Even today, Kuwait continues to struggle with the legacy of the Gulf War and the oil well fires, with more than 300 giant oil lakes remaining to be cleaned up. Encouragingly, however, the environment appears to be well on its way to recovery, with vegetation around the wells showing remarkable growth and reefs in the Persian Gulf slowly returning to their pre-war state. But perhaps most encouraging of all was the incredible bravery and dedication of the firefighters: men and women from every corner of the globe who came together to avert a global catastrophe and bring back the sun to a nation engulfed by the darkness of war.