The Real Story Behind Spider-Man 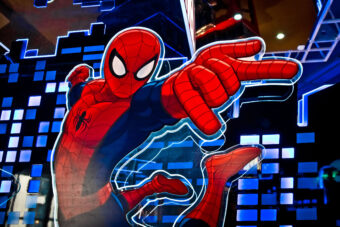 According to an anecdote told by Stan Lee in virtually every interview he’s ever given about Spider-Man, the genesis of the hero began when he saw an insect crawling up a wall while brainstorming ideas and figured that a hero who could stick to walls would be kind of cool. In reality though, the origins of everyone’s favourite friendly neighbourhood Spider-Man are a little less cut and dry.

For starters, Stan Lee himself admitted in his own autobiography, Excelsior!: The Amazing Life of Stan Lee, that the “seeing an insect crawl up a wall” story is one that he has told so often to so many people that he can’t really remember if it’s true or something he came up with as it made a good story to tell the public. Which explains why the story, as consistently as Lee has tried to tell it over the years, has slight variations depending on when and to whom it was being told. For example in some versions Lee saw the insect (usually a fly) while he sat in his office in 1962, and in others he saw it while literally pitching the hero to his boss, and in others it was something he remembered as being cool from many years earlier.

When asked about why he came up with such an obscure power for a hero, in another case, Lee explained that the decision was made partly out of frustration that he thought that he’d pretty much done everything else at that point. In his own words, “The big thing with superheroes is you have to try to do something different. I thought, ‘What superpower could I give him?’. I had already done somebody who was very strong, I did a woman who could turn invisible, I did a guy who could fly. I was thinking, ‘What’s left?”

The heroes referenced by Lee in that quote for non-comic fans who inexplicably decided to view this anyway are The Incredible Hulk, the Invisible Woman and the Human Torch. The latter two heroes are best known for being founding members of Marvel’s first family, The Fantastic Four, co-created by Lee and first introduced in 1961, while the former was introduced in may of 1962 and was also co-created by Lee.

Again, according to another popular anecdote by Lee, before settling on Spider-Man, Lee came up with and rejected several other insect-themed names including Gnat Man, Insect Man, and Mosquito man. Again, this story has been told so many times that there exist multiple variations, but they all say essentially the same thing- that Lee came up with the name “Spider-man” while brainstorming and felt that it just fit, which isn’t really the whole story either.

You see, Lee also stated that he was a huge fan of The Spider, a fictional character hailing from the pulp magazines of the 1930s, and that this character directly influenced the creation of Spider-Man.  In the vein of similar pulp heroes like The Shadow and the Green Hornet, The Spider was a wealthy man who adopted an alter ego to wage a one-man war on crime, often brutally killing criminals and branding their corpses with a spider-shaped mark to serve as a warning to others, hence the name, The Spider.

Save for the use of Spider imagery, The Spider and Spider-Man share virtually nothing else in common, making it fairly obvious that the only facet of the Spider-Man character The Spider influenced was his name. That said, according to Lee, he came up with the name Spider-Man independently, but was convinced that it was the right name when he recalled the name of The Spider’s comic, “The Spider – Master of Men!” And how dramatic he’d found it as a child. As a slight tangent, Spider-Man co-creator, Steve Ditko had claimed that Lee was a big fan of the DC hero Hawkman and has mentioned that he feels that this likely influenced the name “Spider-Man” in some way.

Whatever the case, although Lee liked the name, his publisher to whom he had to pitch the character, Martin Goodman, hated it, reportedly telling him “People hate spiders”. Another aspect of the character Goodman took issue with was Lee’s insistence that he be a teenager, reportedly telling Lee that “teenagers can only be sidekicks”. Lee took particular exception to this as he felt a younger comic character would ultimately be more relatable to teenagers, a rapidly expanding audience for the medium at the time. On a side note, Lee made the conscious decision to buck the trend of referring to a teenage superhero with the suffix “boy”, opting to call his hero Spider-Man to show that he was just as capable as any other hero. Lee has also claimed that Goodman disagreed with him about the idea of Spider-Man struggling with typical teenage issues like girls, homework and bullies alongside being a hero, telling him, “He can’t have personal problems if he’s supposed to be a superhero—don’t you know who a superhero is?”

Again, Lee felt that a hero with personal problems and vulnerabilities would make for a more interesting and ultimately relatable character to young fans and refused to back down.

Goodman eventually relented and gave Lee permission to write a story for the character that was to be published in an issue of a comic series produced by Marvel called Amazing Adult Fantasy… Which in more modern times with the internet having ruined us all, would definitely not feature a teenage superhero… Though a male shooting white sticky stuff would probably be featured…

In any event, as it turns out, the only reason Goodman agreed to let Lee put Spider-Man into the comic was because it was quite literally on the verge of being canned, with the issue featuring Spider-Man slated to be its last. Undeterred, Lee, with the help of artist Steve Ditko, fleshed out the concept and design of the character.

Exactly how much influence Ditko had on the design and backstory of Spider-Man has been the subject of much controversy and debate over the years. This said, it’s largely agreed that Ditko came up with most every aspect of Spider-Man’s costume, including the bold for the time decision to have him wear a mask that covered his entire face. Ditko, in an extended essay about his involvement with the creation of Spider-Man, explained that he did this to cover Spider-Man’s obviously “boyish face” and add a layer of “mystery” to the character. The decision has been widely lauded as brilliant for helping define the character as well as making it easier for children of all ethnicities and backgrounds to relate to the superhero.

In addition to this, Ditko is also said to have expanded upon Lee’s original idea of “a teenager getting bitten by a spider”, though to what extent isn’t clear. We do know that before it was decided that Spider-Man’s powers were apparently going to be caused by the bite of a radioactive spider, it was Lee’s idea to have him get his powers from a magic ring, an idea that was quickly dropped, according to Ditko, because of how similar the idea was to how the powers for the Archie Comics hero, The Fly, worked.

Said idea was apparently partially pitched by another famed comic artist called Jack Kirby, who himself has claimed to have had some input in Spider-Man’s creation. Again, how much influence Kirby had on the character or his backstory isn’t clear, though Ditko has said that Kirby’s involvement was limited to “5 unused pencilled pages of an unfinished story”. That said, these five pages did contain elements that did eventually become part of Spider-Man canon, for example such details as his real name (Peter Parker) and the fact that he lived with his aunt and uncle. Kirby also drafted a version of Spider-Man’s costume that was immediately rejected by Lee because it was essentially identical to the one worn by Captain America at the time. In the end, Kirby involvement with Spider-Man’s debut was limited to the cover, which was colored by Ditko.

Although, as mentioned, the character of Spider-Man was essentially being sent to die in a failing comic book that was slated to be canned after the issue he appeared in, the story was written as if the series was set to continue, with the final pages of the comic noting that “The Spider-man will continue to appear every month”. On top of this, for Spider-Man’s debut, the comic’s title was changed from Amazing Adult Fantasy to simple, Amazing Fantasy to double down on Lee’s assertion that the character would resonate a with younger audience. And, we can only assume, help further solidify the fact that his web shooter was totally family friendly.

And Lee was right because although Amazing Fantasy was cancelled, when Marvel looked at sales figures a few months after its August 1962 release, they realised that the issue had sold more copies than nearly any other comic they’d ever released up to that point. With the popularity of the character now apparent, Marvel began quickly arranged for Spider-Man to get his own series, which began publication of March the following year, starting with The Amazing Spider-Man #1.

Today Spidey is one of Marvel’s most profitable and recognisable heroes, being consistently ranked alongside the likes of Superman and Batman as one of the best fictional characters ever created. Which isn’t bad for a character nobody thought would be popular, originally debuting in a comic that was slated to hit the dustbin of history directly after publication.