The Most Gruesome Death: the Byford Dolphin Accident 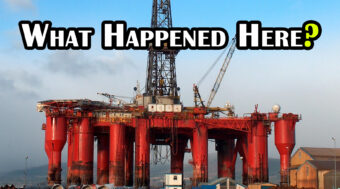 Imagine working 100 metres beneath the sea, a hostile place that sunlight never reaches and where temperatures can plunge to a few degrees above freezing. All your off hours are spent in a tiny, cramped metal tube, breathing a mixture of gases that makes it hard for you to speak and constantly saps heat from your body, giving you a permanent chill. Here you can eat a meal delivered through a tiny hatch or catch a few hours of sleep before your next shift begins and it’s time once again to plunge back into the abyss. Now imagine living like this for months at a time, unable to escape your little sealed world without facing a certain and gruesome death. Welcome to the strange twilight world of saturation diving, one of the most dangerous – and well-paid – jobs in the world.

Developed as part of the U.S. Navy’s Sealab Program in the mid-1960s, saturation diving is a technique that allows humans to live and work at extreme depths for extended periods of time. Specifically, it is designed to overcome the danger of decompression sickness, better known as the Bends. As a diver breathes pressurized air at depth, Nitrogen gradually becomes dissolved in their body. If they then ascend to the surface too quickly, the drop in pressure can cause this Nitrogen to come out of solution and form tiny bubbles, which can cause crippling joint pain, strokes, paralysis, and even death. To avoid this, divers must ascend to the surface slowly, taking decompression stops at regular intervals to allow the Nitrogen to be slowly and safely expelled from their bodies.

However, for long, deep dives like those required in the offshore oil industry, this technique becomes infeasible as divers would have to spend far more time decompressing than working during each shift. For example, a dive of more than an hour below 100 metres depth would require more than 50 hours of decompression. Instead, in saturation diving the divers spend their entire working shift under pressure, spending their off-hours in a diving chamber pressurized to their working depth and travelling to and from the job site in a pressurized diving bell known as a transfer capsule. This practice is based on the fact that after a certain amount of time a diver’s body becomes fully saturated with Nitrogen and cannot absorb any more, meaning that no matter how long they stay below, the required decompression time remains the same. Thus, rather than making multiple dives and decompressions, saturation divers only decompress once at the end of their shift, greatly reducing the risk of decompression sickness. The downside is that this single decompression can take up to two weeks to complete. There are also other hazards, including Nitrogen narcosis, a disorienting euphoria caused by breathing Nitrogen at pressure which divers describe as being similar to alcohol intoxication. Oxygen also becomes toxic below around 80 metres, so saturation divers must breathe trimix, a gas mixture in which much of the oxygen is replaced with Helium. This comes with its own problems. Not only does Helium alter the human voice, forcing divers to wear electronic descramblers in order to be understood, but it also has poor thermal properties, wicking away body heat and leaving divers perpetually chilled. Breathing Helium at depths below 300 metres can also produce severe neurological effects known as High-Pressure Nervous Syndrome.

But the greatest danger in saturation diving is the high-pressure environment itself, as a group of four British and Norwegian divers discovered in 1983 in a gruesome event known as the Byford Dolphin accident.

Byford Dolphin was a semi-submersible offshore oil rig built by Aker Engineering of Oslo in 1974. Weighing 3000 tons and manned by a crew of 100, it was capable of drilling in waters up to 460 meters in depth. To allow construction and maintenance of the wellhead at these depths, the rig was equipped with a sophisticated Saturation Diving system built by French firm COMEX. On November 5, 1983, the rig was drilling in the Frigg Gas Field in the Norwegian sector of the North Sea. At 4AM, British divers Edwin Coward and Roy Lucas were resting in the dive chamber while Norwegian divers Bjorn Bergersen and Truls Hellevik were returning from their shift in the transfer capsule. The capsule was hoisted from the water and docked to the dive chamber by diving tenders William Crammond and Martin Saunders, allowing Bergerson and Hellevik to climb through a short trunk to join Coward and Lucas.The normal procedure was for the divers to first seal off the trunk and isolate the chamber so the tenders could depressurize the capsule and detach it from the airlock. But before Hellevik could close the chamber hatch, William Crammond released the clamp securing the capsule to the trunk.

The results were immediately and horrific. The capsule violently decompressed and blasted away from the trunk, killing Crammond and severely injuring Saunders, while inside the chamber the pressure dropped instantaneously from 9 atmospheres to one in an instant. Hellevik, crouching in the trunk, was blown apart, scattering body parts across the rig deck. One observer described finding his liver “complete as if dissected out of the body,” while part of his spine was found 10 meters above the chamber on the rig derrick. The other divers in the chamber fared little better. Autopsies of Coward, Lucas, and Berergsen revealed lumps of white fat clogging their arteries and veins – proteins which had cooked and precipitated as their blood flash-boiled. Mercifully, all four divers are believed to have died instantly and painlessly.

A subsequent investigation concluded that the accident was caused by human error. As William Crammond was killed in the incident, it is not known why he released the clamp before the chamber hatch was closed; investigators surmised that a combination of fatigue and deck noise may have lead to a fatal miscommunication. However, another key factor was the saturation diving system itself, which, despite recommendations from Norwegian oil and gas regulator DNV, had not been fitted with any interlocks, pressure gauges, or other safety features to prevent the diving chamber from being disconnected while pressurized. This fault in the equipment was not mentioned in the official accident report, and as such the families of the divers killed received no financial compensation. Believing the investigation to be a cover-up, the families formed the North Sea Divers Alliance, which finally succeeded in suing the Norwegian Government and obtaining a settlement in 2008 – 25 years after the accident.

The Byford Dolphin rig is still in operation, currently on contract with British Petroleum, and saturation diving continues to be widely used in the offshore oil industry, consistently ranking among the most dangerous but well-paid jobs in the world – with many divers receiving up to $1400USD per day. While safety measures and accident rates have improved significantly since 1983, the Byford Dolphin incident stands as a stark reminder of the dangers that always come with living and working in extreme environments.