The Forgotten Plague During Prohibition 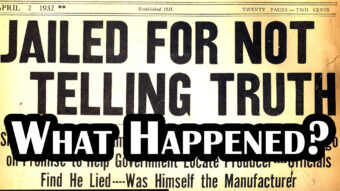 In February of 1930, Dr. W.H. Miles, Health Officer for Oklahoma City, began hearing of an alarming number of patients presenting to hospitals with unusual symptoms. The muscles in their lower legs had become paralyzed, making them unable to straighten their feet and causing them to walk with a bizarre slapping gait. At first doctors suspected Polio or Guillain-Barre syndrome, an auto-immune disorder affecting the nervous system, but tests of the victims’ spinal fluid ruled these out. Dr. Miles, along with his assistant Dr. Ephraim Goldfain, began to suspect some form of alcohol poisoning.

Ever since the United States Congress ratified the Eighteenth Amendment to the Constitution in 1919, making the manufacture, sale, and transportation of intoxicating liquors illegal in all 48 states, the country had been swept by an epidemic of alcohol poisoning. When Prohibition began, bootleggers largely drew from existing stockpiles of commercial liquor or smuggled in alcohol from Canada and Mexico. But when these supplies began to dry up, they turned to alternative sources, such as homemade moonshine and industrial alcohol. In addition to its use in beverages, regular grain alcohol or Ethanol is widely used as a solvent in many industrial processes, and when used for these purposes is exempt from Federal excise tax. To prevent this cheap industrial alcohol from being diverted for human consumption, the US Government mandated that it be rendered undrinkable by the addition of poisonous wood alcohol or Methanol – a process known as denaturing. Some bootleggers tried to filter or distill out the Methanol to “renature” the spirits, while others simply sold denatured alcohol straight to customers. Known as “smoke,” it could be purchased for a few cents a glass at seedy establishments called “smoke joints”, with often tragic results.

Methanol and Ethanol taste and smell identical, making it impossible for the victim to tell them apart. When ingested, Methanol is acted upon by two enzymes which break it down first into Formaldehyde and then to Formic Acid, which in turn attacks the optic nerve, leading to blindness. The acid also shuts down respiration at the cellular level, eventually leading to unconsciousness and death. Between 1920 and 1933, an estimated 10,000 Americans are believed to have died from Methanol poisoning, with an unknown number suffering permanent blindness and other toxic effects.

But the strange paralysis exhibited by Dr. Miles and Dr. Goldfain’s patients was something completely new. After tracking down and investigating more than 60 cases, the pair soon noticed an intriguing pattern: all the victims were regular users of Jamaica Ginger, a popular brand of Patent Medicine. Patent Medicines were a type of proprietary cure-all sold over-the-counter in most drugstores. These could contain all kinds of substances, including herbal extracts, opium, cocaine, turpentine, and mineral oil, but not – strangely enough – actual snake oil. But one ingredient nearly all brands had in common was copious amounts of alcohol – up to 90% in certain cases. This had made Patent Medicines a popular source of alcohol in dry counties for decades. Jamaica Ginger was especially popular among poor labourers in the South. Boasting a 90% alcohol content and costing only 35 cents a bottle, it was typically mixed with soft drinks at soda fountains to help cut down its strong bitter flavour. Among drinkers the concoction was commonly known as ‘Jake’, and the paralysis it caused soon came to be known as ‘Jake Leg’ or ‘Jake Walk’.

But while the link between Jake consumption and paralysis was convincing, it was also puzzling. Jamaica Ginger had been sold since 1863 without any negative effects. What had changed? The case was taken up by chemists Maurice Smith and Elias Elvove of the National Institute of Health, who began testing various brands of Jamaica Ginger to find the causative agent. Strangely, they found no toxic substances, save one – Tricresyl Phosphate or Lindol, a plasticizer commonly used in paints and varnishes. While commonly thought to be nontoxic, Smith and Elvove’s experiments revealed that it was in fact a powerful neurotoxin, with even small amounts inducing paralysis in chickens and cattle within 7-16 days. But how had this substance made its way into Jake? As Smith, Elvove, and other NIH staff pursued the investigation, the full story began to emerge.

Recognizing Jamaica Ginger as a potential source of illicit alcohol, in 1921 the United States Pharmacopeia had mandated that all extract sold over-the-counter contain a certain percentage of Ginger oleoresin, rendering it undrinkable. To ensure compliance, Department of Agriculture agents would randomly test samples by boiling them down and weighing the solid residue that remained. But soon dozens of knockoff manufacturers appeared and began replacing the Ginger extract with castor oil, molasses, glycerine, and other substances to cut down the bitter taste while still passing DOA inspections. Among these was Hub Products of Boston, founded by Harry Gross and Max Reisman. At first their formulation used castor oil, but when the price of this rose steeply, they began casting about for a replacement. Benjamin Werbe, a chemist working for the pair, contacted John Swanson of chemical supplier Raffi and Swanson, who suggested the use of Tricresyl Phosphate.

Gross and Reisman were eventually arrested, and while they plead guilty to selling adulterated Jamaica Ginger, they insisted that the contaminant had originated with their wholesale supplier in New York. The pair were initially sentenced to 2 years in prison, but this sentence was suspended to 2 years’ probation on the condition they help authorities track down the original supplier. When it became clear that there was no supplier and that Gross and Reisman had added the Lindol themselves, Gross was ordered to serve out his prison sentence.

Between 1930 and 1933, 4837 cases of Jake Paralysis were recorded, mostly in Southern states such as Oklahoma, Missouri, Arkansas, and Texas, but the actual number affected is thought to be much higher – between 30,000 and 50,000. The affliction was so prevalent that at least a dozen blues and folk songs were recorded about it, including “Jake Liquor Blues” by Ishmon Bracey, “Alcohol and Jake Blues” by Tommy Johnson, and “Jake Leg Blues” by Willie Lofton.

The Jake Leg incident graphically demonstrated the failings of the 1906 Pure Food and Drugs Act, which had mandated honest labelling but not mandatory Federal testing of food or drugs. It was not until 1938, after a medicine called Elixir Sulfanilimide contaminated with Ethylene Glycol killed over 100 people, that Congress passed the Food, Drug, and Cosmetic Act, finally granting the FDA substantial powers to test and regulate drugs. By that time Prohibition had been repealed, allowing those hardest hit by the Great Depression to forget their troubles – at least for a while – with a nice stiff drink.

For more on the rather heartwrenching Elixir Sulfanilimide incident, see our video on Why Kinder Eggs are Illegal in the United States– And yes, we said ARE illegal, despite what many a commentor is already probably about to write in the comments below trying to contradict us and say they are not because they swear they see them on the super market shelves. You don’t. You just think you do. 🙂