The Curious Case of Radioactive Apartments 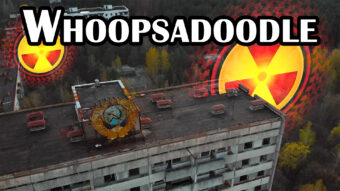 One day in October 1982, 604 tons of scrap metal arrived at the Hsin Jong Iron and Steel Company in Taiyuan, Taiwan. It was soon melted down and used to produce over 20,000 tons of rebar, which between 1982 and 1983 was used in the construction of more than 200 buildings throughout Taiwan, including 30 schools and 100 tower blocks containing over 1700 apartments.

For almost a decade the residents of these buildings went about their lives unaware of the danger lurking in their walls, though there were warning signs. For example, in 1985 while receiving a routine inspection of his x-ray machine, a dentist working out of Taipei’s Minsheng Villas was banned from using the machine when inspectors detected unacceptably high levels of radiation in his office. That same year a load of rebar set off radiation alarms at a local nuclear power plant. But it would not be until 1992 that the full extent of the disaster became known and these apartment buildings’ secret was revealed.

On July 31st of that year, a worker from Taipower was showing his son how a Geiger counter worked when the device began detecting abnormally high radiation levels coming from the walls of his apartment. The story was soon picked up by a reporter from the Liberty Times who confirmed that the building – and many others like it – were emitting more than 100 milliSieverts per year – 100x times the recommended safe radiation dose. The source, as it turns out, was the aforementioned rebar which had been contaminated with highly-radioactive Cobalt-60.

Where the Cobalt came from isn’t known; some sources claim that the scrap metal was sold to Hsin Jong by energy conglomerate Taipower, who operate Taiwan’s three nuclear power plants. Others suggest it came from stolen check sources used to calibrate radiation-measuring instruments, or from a scrapped radiation teletherapy machine used in the treatment of cancer.

Whatever the case, at first the Atomic Energy Commission, Taiwan’s nuclear regulatory agency, was slow to act, reassuring residents that the radiation levels were actually safe. But under pressure from the Association for Radiation Safety, the AEC eventually launched an official inquiry. The investigation, which lasted four years and cost $15 million dollars, ended up searching some 30,000 apartments throughout Taiwan, a full 2% of which were found to be dangerously radioactive. In total, around 10,000 citizens were exposed to elevated levels of radiation,  several of whom had developed cancer as a result – including a young boy who was irradiated by a metal window frame at his kindergarten and later died of leukaemia. In 1993 three AEC officials were indicted for failing to warn of the contamination at Minsheng Villas, despite having known about it as early and 1985. And in 1997 the Taipei district court ruled in favour of 57 victims of radiation exposure and ordered the Taiwanese Government to pay compensation for medical expenses. Today most of the residents of contaminated buildings have been evacuated and the buildings themselves either decontaminated or demolished. However, as around eight Cobalt-60 half-lives have passed since 1982, the radiation emitted by the remaining buildings has dropped to far safer levels.

While the 1982 contamination incident was a tragedy, to the scientific community it presented a rare and unique research opportunity.Most data on the effects of radiation on humans comes from victims of acute radiation exposure, such as survivors of the atomic bombings of Hiroshima and Nagasaki or the Chernobyl disaster. But the Taiwan incident was the first major example of long-term chronic radiation exposure in a large population.

In 2007, a team from the Taiwan Nuclear Science and Technology Association lead by W.L. Chien published a study analyzing the health outcomes of 10,000 residents of radioactive apartments, all of whom had been exposed for between 9 and 20 years. The study found that the average radiation dose rate per resident was 0.4 Sieverts per year, making the collective dose for the population 4000 person-Sieverts. According to the widely-accepted Linear No Threshold or LNT model for radiation exposure, at such a dose rate one would expect to see a 7.8% rate of excess cancer deaths and a 1.3% rate of visible congenital defects in the children of residents of reproductive age – in this case 302 and 67 cases, respectively. But when Chien and his colleagues analyzed the data, they found only 7 cancer deaths and 3 cases of congenital defects – around 3% of the expected values. Stranger still, the cancer rate was actually lower – only 3% – than for the regular, non-exposed Taiwanese population.

So what’s going on here? Chien speculates that this phenomenon might have to do with a theory called radiation hormesis, which posits that low doses of radiation might actually be beneficial. The theory goes that low levels of radiation act something like a vaccine, stimulating and strengthening the cellular mechanisms that repair damaged DNA or cause cancerous cells to terminate themselves. Thus while the standard Linear No Threshold model holds that all levels of radiation, no matter how low, are in some way harmful, according to the Radiation Hormesis model lower levels of radiation have either a neutral or beneficial effect, only becoming harmful above a certain dose threshold. Among advocates of Radiation Hormesis, the Taiwan apartment incident is held up as the clearest demonstration of this principle in action.

But there are some problems with this theory. While the idea of Radiation Hormesis has been around for over 100 years, it has always been a controversial one, and thus far no experiment has definitively demonstrated its existence. Even more damning, however, is the fact that Chien’s study did not control for the age of the studied population. As the affected buildings were largely schools or family apartment buildings, the average age of their residents was far younger than the Taiwanese population as a whole – and thus would have had significantly lower cancer rates to begin with. A 2006 study by Hwang et al found that when age was controlled for, the cancer rate rose to 60% that of the general population. Furthermore, studies by National Yang Ming University and National Taiwan University Medical School found higher rates of DNA damage, chromosome aberration, cataracts, and thyroid disease – as well as lower average immune cell counts – among the affected population.

However, it is generally agreed that the sample sizes used in these studies are too small to draw any definitive conclusions. Further complicating the matter is the fact that cancer rates tend to naturally vary by up to 40% simply due to lifestyle choices like diet, exercise, and smoking, making the effects of environmental factors like radiation hard to determine. So the jury remains out on radiation hormesis, and while doubtless many medical researchers would relish the opportunity to gather more data on the subject, we can only hope that such a terrifying and tragic opportunity never presents itself again.

You’ve probably heard that “the only living things that would survive a nuclear war would be cockroaches and Cher”. The latter may be true, but the former is most definitely not. It has even be suggested that cockroaches can survive the amount of radiation at ground zero of a nuclear explosion, though of course, not the explosion itself if they were right next to it.

However, the truth is that while cockroaches can withstand ionizing radiation bursts about 10 times as high as humans, they actually are relative light weights in that arena. In fact, it only takes a burst of about 1,000 rads to significantly interfere with a cockroaches’ ability to reproduce, which would obviously be the eventual end of the cockroach, if they were all exposed to this level. For reference, this is about the level of radiation at around 15 miles from Hiroshima directly after the bomb was detonated. (note: the Hiroshima bomb was a 15 kiloton weapon, which is nothing next to the megaton nuclear bombs that can be found in most nuclear stockpiles today.)

Further, at levels of around just 6400 rads, about 94% of immature cockroaches will die and at around 10,000 rads, most adult cockroaches will not survive. While this is very impressive by human standards (humans only being able to survive about 400-1000 rads before death), it’s decidedly unimpressive by insect standards; most insects can survive much higher burst rates than the cockroach, according to the United Nations Scientific Committee on the Effects of Atomic Radiation, who, when they aren’t spending their time trying to spit out their name, apparently enjoy zapping various living things with ionizing radiation. Squeal piggy!

So who are the actual living creatures that would inherit the Earth after a world-wide nuclear war? Well, for reasons we’ll get into shortly, that’s hard to determine. But at least when talking burst-rates of radiation as we’ve been discussing, it has been shown that fruit flies take around 64,000 rads to kill. More impressive than that is the flour beetle which can withstand up to around 100,000 rads before dying. Even better is a type of wasp, the Habrobracon, that can survive as high as 180,000 rads! These all get beat by the Deinococcus radiodurans microbe. This bacteria can survive radiation levels as high as 1.5 million rads at room temperature and nearly 3 million rads when frozen, such as during a hypothetical nuclear winter.

And if you’re wondering, the primary reason cockroaches and many types of insects are so resistant to ionizing radiation is that their cells don’t divide that much between molting cycles. Cells are most susceptible to damage by ionizing radiation when they are dividing. Given that a typical cockroach only molts about once a week and its cells only divide around a 48 hour period during that week, about 3/4 of the cockroaches exposed would not be particularly susceptible to damage by ionizing radiation, at least, relative to those whose cells were currently dividing.

As you might have inferred from this, this means that if the radiation experienced by these cockroaches was consistent over a long period of time, they are going to be significantly more susceptible to problems than the numbers quoted in many a study on the matter seem to indicate. These numbers are using specific bursts of radiation over a short span. Given that at any given moment about 75% of cockroaches aren’t experiencing cellular dividing, about 75% of them are going to be much less susceptibility to damage from these short bursts of radiation, which will drastically skew the numbers of what the species as a whole could survive when talking about a global nuclear fallout scenario.