How Most People Got Schrödinger’s Cat Thought Experiment Wrong 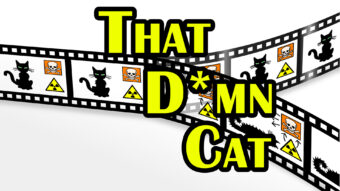 Quantum mechanics is every Hollywood writers favorite handwavy tool to accomplish whatever they feel like in a given moment regardless of whether what they say or have happen has anything remotely to do with the reality of this branch of science and, well, reality. Beyond the masses, it is so NOT understood that even the likes of Richard Feynman, one of the greatest theoretical physicists said (probably joking) that nobody understood the topic. And yet, many will use examples to explain it, and probably there’s no example that is used more often than Schrödinger’s cat… but don’t do it yourself, because chances are that you are missing the point Schrödinger intended.

For the uninitiated, in an ironically oversimplified nutshell, quantum mechanics is the study of everything at a very small scale- this includes the study of elementary particles such as the ones that constitute an atom. The realm of quantum mechanics is largely probabilistic, given that things that seem so simple in classical physics such as knowing the position and momentum at the same time of macroscopic objects is impossible at the scales of an atom or smaller. Quantum mechanics therefore deals with superposition states, where a particle could be in more than one state at a time before it is forced to collapse when observed.

As you can imagine, this is not an easy pill to swallow and at the infancy of this branch of physics everyone was struggling to get some water fast. A lot of proposed different solutions have been published explaining the lack of deterministic nature from these very small particles, yet no one has been able to offer one that is universally accepted. Many physicists are actually content with just dealing with the probabilistic mess since it has worked so far. Albert Einstein was not among them. So he, along with Boris Podolsky and Nathan Rosen published a paper in 1935 called “Can Quantum-Mechanical Description Of Physical Reality Be Considered Complete?” where they claimed that quantum physics was not complete due to the paradoxes it could create without any further context. As an example, they mentioned in the paper the issue regarding quantum entanglement; the phenomenon of how a particle’s state could influence another one even if they were separated, regardless of distance, yet this influence would be instantaneous. According to Einstein, this would mean that information would be traveling at infinite speed, therefore breaking one of the most fundamental constants of physics; the speed of light. In 1964, John Stewart Bell proposed a solution for the paradox and later experiments supported these conclusions, but at the time of Einstein’s article, another physicist was not impressed either with the implications that quantum indeterminacy brought to the table, and that someone was Erwin Schrödinger.

Born in Austria in 1887, Erwin Schrödinger was not only a successful physicist, but also contributed to quantum mechanics significantly and one of these contributions was the

Schrödinger equation, which is used to describe the wave function of a system, a tool that would eventually earn him a Nobel Prize in physics that he shared with Paul Adrien Maurice Dirac. Given that his career has been so extensively dedicated to quantum mechanics, you might wonder; how could he be skeptical of quantum mechanics’ description of nature?

To answer this, it is necessary to dive into the conversations Schrödinger and Einstein had through the years. Given their shared skepticism of quantum indeterminacy, they would exchange letters about the topic and in one of these letters he proposed an example that is fairly known by everyone at this point:

Imagine a cat inside a steel box, inside with the cat there is a device; A geiger counter (a device to measure radiation) is monitoring a small amount of a radioactive substance with a probability of 50% that one of the atoms would decay in the next hour (of course with a 50% chance that no atom will). If one of the atoms decay, it will be detected by the Geiger counter, which will tell the device to release hydrogen cyanide.

Given the vague nature of quantum mechanics, until measured or observed, the system has not been forced to collapse into one of two states (the atom decaying or not decaying), therefore the cat is equally just as dead and alive at the same time as the atom is decayed or not decayed, since the cat’s health is dependant of the mentioned atom. The trigger that will force the atom and subsequently the cat into one of the two possible states is a physicist (hopefully not the owner of the cat) that will open the door of the box and look by himself after an hour the experiment has started.

You see, the problem the physicist had with quantum mechanics was that no one knew where its probabilistic effects ended. Why would the life or death of the cat be dependent on our observation? Why would the system care if we observe it or not? Isn’t the cat observing the poison? Who is observing the physicist observing the inside the box? How large could these probabilistic effects be? If it has a limit in its scale, how large is it? How could a system be independent and superpositioned before our observation but then its state be defined only once we observe it? This is a mess to explain because in relative macroscopic terms, everyday objects are not in multiple states until an observer interacts with it. It is therefore illogical that before opening the box, the cat is dead and alive at the same time, and only until you open the box the cat is retroactively dead, if that’s the result observed. This was meant as a direct critique of the Copenhagen interpretation.

Einstein couldn’t agree more with the implications this scenario created. When amplifying its effects, the situation regarding what is deterministic and what is probabilistic becomes very hard to define. Stating this in a letter sent to Schrödinger in 1950:

This interpretation (that quantum mechanics is a complete description of reality) is, however, refuted, most elegantly by your system of radioactive atom + Geiger counter + amplifier + charge of gun powder + cat in a box, in which a psi-function of the system contains the cat both alive and blown to bits. Is the state of the cat to be created only when a physicist investigates the situation at some definite time? Nobody really doubts that the presence of absence of the cat is something independent of the act of observation. But then the description by means of the psi-function is certainly incomplete…

It must be said that was Einstein who substituted the cyanide for gunpowder as a means of hypothetical animal cruelty.

Naturally, the thought experiment has been either misquoted and even sometimes twisted to prove something unrelated to physics entirely. The easiest misconception to make about the thought experiment is that Schrödinger was serious about this experiment, and that “it could be done”. You might have guessed at this point that he didn’t take the concept seriously, rather he mocked the possibilities that quantum indeterminacy implied.

Another misconception is the favorite from philosophers and people who want to give a mystic nature to this thought experiment. For them “observer” is defined as an actual “eyewitness”, so to speak; a conscious entity or a person. This normally branches into linking consciousness and quantum mechanics in a very holistic way to give mystic-like philosophies some kind of credibility. One famous theory is the Von Neumann-Wigner Interpretation that claims that consciousness is necessary to collapse the wave function. It must be pointed out however that Schrödinger probably meant that either an observer could be or not a conscious observer. It could be something that simply measures or interacts with the system. So its philosophical reach probably was not meant to necessarily speak about conscious beings or even point out that a conscious observer was not necessary. Physicists tend to lower the role of a conscious actor in the model, since for them, the universe does not care for your interpretation.

A very simplified interpretation was that Schrödinger was mocking or dismissing quantum mechanics entirely. But knowing that he established very well known formulas and that everyone knew that quantum mechanics works, this is not the case at all. He just simply argued that instead of interpreting quantum mechanics as a complete theory that relies on probability, that we might just not know how the real gears behind it works.

As science author Philip Ball, pointed out, Erwin Schriodinger did not mean to say that quantum physics are not applicable to everyday macroscopic objects. We already know about this, but rather use the example as an absurd, exaggerated way to show that pushing the limits of what could be considered as “quantum objects” could bring paradoxes that might not be easily solvable.

Of course, that hasn’t stopped people from trying. For example, we have the relational interpretation which states that anything can be an observer, each with their own version equally valid: If the cat has been poisoned, it observed the system collapsing, but since the physicist has not looked inside the box, the system is in superposition for him, until he obtains more information about it by opening the box.

There is also the Many-Worlds interpretation by Hugh Everett, where it says that any measurement that forces a system to collapse into one of two superpositioned states, will split reality in two; both equally real, and yet, none can interact with each other. This means that the collapse never happened: if you open the box and the cat is still alive, it was always meant to be alive… in your reality, but now there’s another universe where you are being arrested with charges of animal cruelty.

As for Neils Bohr, the main antagonist of Albert Einstein regarding this topic, the riddle wasn’t a riddle at all. He didn’t think the observer directly triggered the collapse, it simply measured it. For him, the first observer was the Geiger counter. One could say that for Bohr, anything outside the box was not necessary to obtain a result.

Many more solutions to the paradox have been proposed, at the same time showing only how hard it is to solve. None of these have offered a satisfactory conclusion for everyone. This is probably why Erwin Schrödinger wasn’t much of a fan of speaking about probability in quantum mechanics, stating:

I am no friend of probability theory, I have hated it from the first moment when our dear friend Max Born gave it birth. For it could be seen how easy and simple it made everything, in principle, everything ironed and the true problems concealed.