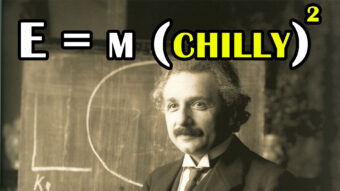 The name Albert Einstein has become a byword for genius – and rightly so. The German physicist’s theories of Special and General Relativity fundamentally reshaped our understanding of the uni-verse to a degree not seen since Isaac Newton, while his groundbreaking 1905 papers on Brownian Motion and the Photoelectric Effect laid the groundwork for modern atomic and quantum theory. Yet despite his status as a giant of theoretical physics, one thing Einstein is not commonly associat-ed with is hands-on mechanical innovation. It may thus come as a surprise that Einstein actually held over 50 patents for practical devices ranging from hearing aids, cameras, gyrocompasses, and even a stylish vest with an adjustable elasticated waistband. But the vast majority of Einstein’s pa-tents covered an altogether unexpected device: a new kind of refrigerator.

The origins of Einstein’s long-forgotten foray into practical mechanics lay in a tragic accident. In 1926 Einstein read a newspaper article about a Berlin family who had died in their sleep when their refrigerator sprung a leak. Refrigerators at the time ran on a variety of refrigerants such as Ammonia, Methyl Chloride, and Sulfur Dioxide, all of which were highly toxic or even explosive. Moved by this tragedy, Einstein set out to design a safer refrigeration system. To aid him in this en-deavour he enlisted the help of former student Leo Szilard, an acclaimed Hungarian physicist who in 1933 would invent the concept of the nuclear chain reaction. They proved to be an ideal team, Szilard having written his doctoral dissertation on the thermodynamics of fluctuating systems and Einstein having worked for many years as a clerk at the Swiss Patent Office in Bern, granting him intimate knowledge of the patent system. However, the presence of Einstein’s name on the patent applications raised more than a few eyebrows, with several patent clerks writing back to confirm that this was indeed the Einstein.

In total Einstein and Szilard were granted 45 patents covering three different refrigerator designs. Their first design was an improvement on the vapour-absorption cycle invented in 1922 by Swe-dish engineers Baltzar von Platen and Carl Munters. Unlike regular vapour-compression refrigera-tors which use a mechanical compressor, Einstein and Szilard’s system had no moving parts and was completely sealed, eliminating the need rotary seals and other components that could potential-ly leak. The refrigerator used a complicated circuit to circulate a combination of water, ammonia, and butane refrigerants and was powered from the outside by a gas flame, much like the propane refrigerators used by many campers and RV-ers.

But while this is the best-known of the Einstein-Szilard refrigerators, it is the pair’s second design which most excited Einstein. Dubbed the Volks-Kühlschrank or “people’s refrigerator”, this was an ingeniously simple device that could be powered by water pressure from an ordinary household tap. Water running through a Venturi generated a mild vacuum, which caused methanol stored in a tank to evaporate. This vapour then absorbed heat from the food compartment before dissolving in the outgoing water, carrying the heat with it. While this process eventually consumed the Methanol, requiring it to be regularly topped up, Einstein reasoned that Methanol was cheap enough for this to not be an issue. Indeed, Einstein had high hopes for this design, which he believed could bring reli-able refrigeration into the homes of even the poorest families.

The pair’s third design was by far their most technologically advanced, but also their most impracti-cal. This system was largely identical to a regular vapour-compression fridge except that instead of a mechanical compressor it used a series of powerful electromagnets to pump liquid metal through a circuit. The liquid metal was then used to compress regular refrigerant gases. At first the pair used liquid Mercury, but when this proved insufficiently conductive they switched to a liquid Sodium-Potassium alloy, which was not only highly corrosive but had a nasty habit of bursting into flames or even exploding on contact with air and water. Despite this rather significant hazard, however, as the system was completely sealed Einstein and Szilard were confident this would not be a serious problem.

Yet despite the ingenuity of these designs, in the end very little came of the Einstein-Szilard refrig-erators. In 1927 Swedish Electrolux bought the absorption refrigerator patents for around $750 (about $11K today), but this was mainly to retain control on their existing Munters/von Platen pa-tents; the Einstein-Szilard design was never incorporated into any commercial refrigerator. Further-more, while more efficient than other absorption cycles, the system was far less efficient than regu-lar vapour-compression fridges, and the discovery in 1930 of the non-toxic, non-flammable refrig-erant Freon nullified the safety advantages of the Einstein-Szilard design.

The ingenious water-powered refrigerator also turned out to be a dead end. Not only did Methanol turn out to be far more expensive than Einstein had anticipated, but water pressure in German apartments was notoriously weak and inconsistent. And while the electromagnetic pump was an impressive technological achievement, its sodium-potassium working fluid was far too dangerous for household use. It was also loud: in the words of Szilard’s friend, Hungarian Physicist Denis Ga-bor, the prototype “howled like a jackal.” Interestingly given Einstein’s more famous work in phys-ics, the Einstein-Szilard pump did eventually find a niche use in certain types of nuclear reactors, which use liquid sodium-potassium as a coolant.

While Einstein’s practical inventions never made as much of an impact as his theoretical work, 90 years since it was patented the Einstein-Szilard absorption refrigerator may be poised to make a comeback. An improved version called the Isobar is currently under development by UK inventor William Broadway for transporting vaccines in developing countries with limited electrical infra-structure – an application that would have delighted the famously humanitarian Einstein.

#1: While far less well-known than Einstein, Leo Szilard was nonetheless a prolific and important physicist and inventor in his own right. Born in Budapest in 1898, Szilard spent the early part of his career in Germany, where in addition to helping Einstein design refrigerators he also independently invented and patented the linear particle accelerator, the cyclotron, and the electron microscope.

When the Nazis came to power in 1933, Szilard, a Jew, fled to London, and it is here that he made perhaps his most important discovery: the nuclear chain reaction. On September 12, 1933, Szilard read an article in the Times summarizing a speech by physicist Sir Ernest Rutherford on the work of his students Ernest Walton and John Cockcroft, who had recently succeeded in splitting Lithium atoms. In the speech, Rutherford dismissed out of hand the notion of using nuclear fission to pro-duce energy, a claim that so annoyed Szilard that he stormed out onto the rainy London streets to come up with a rebuttal. According to legend, the answer came to him in a flash of inspiration as he waited for the stoplight to change at the corner of Southampton Row and Russell Square. Szilard realized that when an atom fissions or splits it gives off several free neutrons, subatomic particles with no electric charge. If these neutrons could be directed to strike other atoms, more fissions would ensue, each giving off more neutrons and so on, creating a self-sustaining chain reaction. Szilard patented his concept in 1936, and in 1938 moved to New York to work with Italian physi-cist Enrico Fermi on building a practical nuclear reactor.

When the Nazis invaded Poland in September 1939, Szilard feared that with its head start in nuclear physics Germany could be the first to develop an atomic bomb. He thus drafted a letter to President Franklin Roosevelt arguing that the United States should start its own atomic bomb project. But as Szilard was completely unknown to the American establishment, he decided to have the letter signed by the one physicist famous enough to get the President’s attention: Albert Einstein. In addi-tion to lending his famous name, there was another reason for involving Einstein. Nuclear reactors and bombs required Uranium, the primary source of which was Czechoslovakia, then under Nazi occupation. The only other known source was the Belgian Congo. As it happened, Einstein was close friends with Queen Elizabeth of Belgium, and it was hoped that this friendship could be used to secure a supply of Uranium for the Allies. While in the end nothing was made of this connec-tion, the Szilard-Einstein letter had the intended effect. In January 1942, President Roosevelt offi-cially approved what came to be known as the Manhattan Project, which a mere three years later succeeded in building the world’s first atomic bomb.

After the war, the ever-versatile Szilard switched from physics to biology, where he made numer-ous contributions to cell culture techniques, participated in the first cloning of human cells, and helped found the Salk Institute for Biological Studies. He also became an ardent anti-nuclear activ-ist, warning against the possible development of cobalt-salted bombs which he feared could bring about the end of life on earth. Indeed, this concept formed the basis of the fictional “doomsday machine” in the classic 1964 film Dr. Strangelove.

In 1960 Szilard was diagnosed with bladder cancer which, in characteristic style, he proceeded to treat with a regimen of radiation therapy he designed himself. Amazingly, the treatment worked, and the cancer never returned. Four years later, however, Szilard died in his sleep from a heart at-tack on May 30, 1964. Of Szilard, Dennis Gabor, longtime friend and Nobel-Prize winning inventor of the hologram, would later say: “He used to discuss all his inventions with me. I was so full of admiration that I felt quite stupid in his presence. Of all the many great men I have met in my life, he was, by far, the most brilliant. Had he pushed through to success all his new inventions, we would now talk of him as the Edison of the twentieth century.”

Strauss, Ilana How Einstein’s abandoned refrigerator design could feed the hungry and save the planet From the Grapevine, September 12, 2016 https://www.fromthegrapevine.com/innovation/albert-einstein-abandoned-refrigerator-invention