The Quest For Jesus’ Foreskin 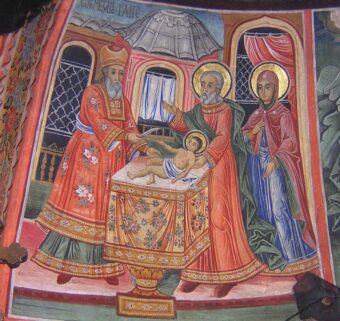 While there are many relics attributed to Jesus surviving through more modern times- including famed 16th century Catholic Priest Erasmus pointing out the large number of buildings that could be built using all the pieces of Jesus’ cross that were then around- unlike some other figures in the history of Christendom, relics of Jesus’ body itself aren’t really a thing. This is, of course, because he and his body ascended to heaven and apparently nobody thought to collect the Holy Fingernail Clippings or cuttings of his luscious locks and magnificent beard. However, there is one cutting from his body that did purportedly survive through the ages- a piece of his manhood. In fact, this snipping of his member was revered through much of Christian history and even prayed to, including a feast day (January 1st) where towns that had one would cart it out and celebrate… That is, before the Catholic Church decided maybe they wanted to rethink this particular relic and in the early 20th century even went so far as to ban any mention of the Holy Foreskin, despite that it apparently still existed at the time in Calcutta.

As to the first mention of the survival of Jesus’ foreskin, this comes to us thanks to the Syriac Infancy Gospel, where it states,

And when the time of his circumcision was come, namely, the eighth day, on which the law commanded the child to be circumcised, they circumcised him in a cave.

And the old Hebrew woman took the foreskin… and preserved it in an alabaster-box of old oil of spikenard. And she had a son who was a druggist, to whom she said, “Take heed thou sell not this alabaster box of spikenard-ointment, although thou shouldst be offered three hundred pence for it.”

Now this is that alabaster-box which Mary the sinner procured, and poured forth the ointment out of it upon the head and feet of our Lord Jesus Christ, and wiped it off with the hairs of her head.

For those unfamiliar, this particular work is one of many early church writings that were discarded over time as the church sorted what writings were considered part of Christian cannon and which ones should be rejected.

As all of the infancy gospels appear to date over two centuries or more after Jesus lived, they all went the way of the Star Wars Expanded Universe stories. And worse than that, unfortunately for those of us who like reading all the details in history, when this happened, many of these other works that in various circles had previously been staples of Christian doctrine were summarily suppressed and occasionally purposefully destroyed to erase record of them. Nevertheless, being rather prevalent, some survived, including the aforementioned bit mentioning Jesus getting snipped and that the snipping had been saved.

As for canon accounts of Jesus’s tip being reduced, we have the likes of Gospel of Luke where it states, “And when eight days were accomplished for the circumcising of the child, his name was called JESUS, which was so named of the angel before he was conceived in the womb.”

Of course, given this lacks any detail, it’s speculated by some biblical scholars that the author was probably just assuming this occurred, given Jesus being Jewish and all and this being the traditional thing done on the eight day following birth, rather than said author actually having first hand knowledge of it.

Whatever the case, there is no mention in cannon works of the survival of this bit of Jesus’ penis. Nonetheless, as the circumcision of Jesus was a rather important moment in church history, such as being the first blood he spilled and all that, a lot of artwork was made depicting the event, although usually not depicted how it would have actually happened. For example, most depictions show a priest in a temple doing it. However, at the time of Jesus’ birth, it was actually custom for this to be done in the home of the family, and not performed by a priest, but rather the baby’s father.

In any event, it is perhaps not surprising that at some point someone got the bright idea that the Holy Foreskin may have survived and if found would make for a great relic, with the first supposed physical evidence of it being documented in 800 AD.

That said, some were skeptical, with 17th century Vatican librarian Leo Allatius allegedly asserting that the foreskin of Jesus would have ascended to heaven with him. In another account, Greek monk Anastasius Sinaita stated in the 7th century, “We can be sure that he, having voluntarily submitted himself to the act of circumcision, will have kept his foreskin, so that it could be restored to his body following his resurrection, thus allowing him to ascend to his heavenly father with a perfect body, entire and intact.”

Moving on from there, as relics, particularly a rather unique one like the actual flesh of Jesus, were a large draw for a church that had one or more, many claimed to possess the Holy Foreskin, with various stories about how they got it.

As alluded to, the first documented instance of the thing having survived the centuries occurred in late 800 AD, where none other than Charlemagne is noted to have gifted the Holy Foreskin to Pope Leo III when the Pope crowned him Emperor on December 25th that year. So how did Charlemagne get it? It was allegedly either gifted to him by the Byzantine Empress Irene or an angel while he prayed.

As to how everybody knew it was the real deal, apparently they just accepted it at the time. However, about a half millennia after Charlemagne gave the tip to the Pope, none other than Sweden’s Saint Bridget herself had a vision, getting a tip of her own that the Holy Foreskin in Rome was the real deal.

At its peak, up to a couple dozen churches possessed foreskins claimed to have come from Jesus’ penis. As intended, these were huge draws, and various powers and miracles were attributed to the Holy Foreskins. Among these included imparting fertility- such as when one of them was sent to England to Catherine of Valois to aid in her getting knocked up by Henry V.  Some women even had some rather erotic adventures thanks to the little thing. For example, famed Christian mystic Agnes Blannbekin allegedly told of a miracle that had occurred concerning the Holy Foreskin, stating to her confessor, who later recounted it,

She began to think about the foreskin of Christ, where it may be located…And behold, soon she felt with the greatest sweetness on her tongue a little piece of skin like the skin of an egg, which she swallowed. After she had swallowed it, she again felt the little skin on her tongue with sweetness as before, and again she swallowed it. And this happened about a hundred times.

Of course, the existence of enough bits of Jesus’ baby penis to make even the most well endowed of men feel inadequate if they were combined caused a bit of an outcry for the Pope to declare which Holy Foreskin was the real one. Sidestepping the issue, Pope Innocent III decreed “Rather than attempt rash answers to such questions, it is better that they be left entirely to God.” Further calls throughout the centuries for other popes to ring in resulted in just as much hand washing.

Continued embarrassment over the little thing in 1900 led to the church declaring anyone who wrote about the Holy Foreskin would be excommunicated.

Around this time the last, and supposedly true, Holy Foreskin existed in Calcutta. How did they get it? It apparently was there from about 1527 when a soldier who took part in the 1527 Sack of Rome was arrested and held in Calcutta. While there, he either revealed he had it or hid it… for reasons we guess… and it was found later in the town. Either way, the town now had the Holy Foreskin and widely proclaimed it, including having a little celebration on the January 1st feast day. At some point it went missing again, but was rediscovered in 1856 hidden in a wall in the Abbey there.

Unfortunately, in 1983 the Holy Foreskin went missing for good. Various stories have been bandied about concerning who took it, from a random French couple, to conspiracies that the priest himself did it and just blamed it on others. A larger conspiracy is that the real power behind the disappearance was the Pope himself, with the church at this point being as embarrassed as ever about the existence of the supposed Holy Foreskin and the powers people attributed to it. Thus, they allegedly got rid of it, hoping the wider public would forget.

Of course, the Holy Foreskin was contained in a jewel encrusted case, so it may well be that some thieves simply took it for that reason, not really caring about the bit of skin inside.

Whatever the case, people did not forget, and in the town itself a spate of bad weather directly following was even blamed as God punishing the region for its loss of a bit of his son’s penis.

Sadly, then until now, despite extensive searching by many, nobody seems able to figure out what happened to this bit of baby flesh.