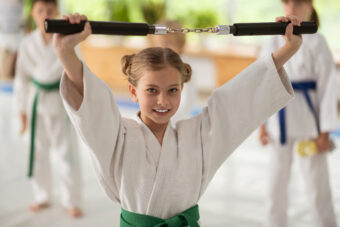 Famously a weapon of choice for legendary martial artist Bruce Lee, at least in certain films, nunchaku, or nunchucks, are a popular facet of pop-culture and there are those who’d have you believe that this humble weapon used to widely shatter jawbones like Samson during a particularly bad hair day. But were nunchucks ever actually used in combat? After all, one is just about as likely to hurt themselves or allies around them than an enemy unless extremely well trained, and even then its a risk when not particularly careful.

To begin with, going back to the earliest known references to this particular staple of certain martial arts, it turns out nobody is quite sure who invented it, not because its origins are thousands of years back or anything like that- but simply because up until the likes of Bruce Lee, it wasn’t really a terribly popular weapon of choice, and its history isn’t well documented as a result of its relative obscurity.

So who do people think invented it? It turns out even if you consult educational tomes of knowledge concerning use of nunchucks, as we did, you’ll find about as many stories as there are books covering the sticks with a little extra in the middle.

A recurrent theme in the most commonly touted origin stories, however, is that its invention was spurred owing to a lack of other weapons, and thus it was an improvised weapon created from and altogether more innocuous item meant for other purposes before someone realized if you swung it- hey- you could really hurt someone (or yourself).

So is there any truth to this? While there is much debate, starting with its use as a rice flail, the specific form we think of would not have been used this way given how you’d have to swing it to be effective at doing that job (without hitting yourself anyway). That said, this doesn’t rule out such a different type of flail being the inspiration, as there was a type of flail used for this. It’s just that one end was extremely long to keep it away from your body. So it’s possible someone might have gotten the bright idea to make both ends the same, short, length, to make for an effective weapon.

As for use in horses, depending on who you consult, the nunchuck was either used as a sort of horse whip (which would be rather an overkill one would think) or as reigns, with the cord to go in the horse’s mouth and the two wood pieces to hang on to.  As with the rice flail idea, however, this would appear to be mostly speculation, rather than backed up by any hard evidence.

Getting even more specific, another common story is that the first nunchucks were created by a janitor who improvised a flail out of a broom he snapped in half and connected together with a length of chain. A variation of that tale sometimes replaces the janitor with a martial arts master who snapped his favourite training staff in half and connected the halves with a length of chain so that he could keep using it, developing a new form of fighting around the new weapon’s unusual properties.

Much more popularly, there is a Chinese legend that after Emperor Jiu Hong Jun suffered a major loss to the Mongolian hordes, he and his soldiers retreated to a village. While there, they saw the farmers using a certain type of flail in the rice harvesting process and got the idea to use them as a weapon, in this case initially keeping the long end part to make it a more effective weapon against, for example, cavalry.

He then, no doubt with Eye of the Tiger playing in the background, allegedly spent a few days developing a fighting style with it, quickly trained soldiers to use it, and then with the strength of this new weapon, managed to drive off the Mongolians. During the ensuing battle, apparently the handles of the flails commonly broke, creating relatively equal lengthed handle and end, and thus the nunchaku as we think of it was birthed.

Naturally, such ultra-specific origin tales are largely dismissed as, at best, romantic exaggeration, at worst perhaps completely fictional, which hasn’t stopped all of them at one point or another being put forward as a definitive origin story for the weapon, even in some otherwise reputable books on the subject.

So what do we know for sure? Not much. But, to begin with, the weapon appears to have first popped up in a documented way in Okinawa a little over a few hundred years ago. As to who came up with it, while the popular story is peasants, it’s thought more likely it was the nobles there, who were really the only ones to popularly study martial arts at this point. More specifically, while there is much speculation, it is thought that when the nobles were barred from using such weapons like spears, swords, and guns by their then Japanese overlords, they turned to things like staff, sai, kama (a sort of sickle used for farming) and the like and, at some point, someone came up with or adopted the nunchuck for use as a weapon.

This brings us to whether nunchucks were ever used during combat. While there’s no evidence to suggest they weren’t per se, there is a decided lack of evidence that they were, which is odd given other such weapons of the age do have such evidence. And even when talking just martial arts training, there don’t appear to be any traditional katas (pre-choreographed patterns of movements used to learn how to handle and wield the weapon) for the nunchuck, unlike other of these weapons, such as the staff.

In fact, after its invention, given history is silent on it in many ways for any other uses, it’s thought likely if it was used in actual fights, it was in all likelihood mostly for “street self-defence” by those looking to arm themselves with an easy to conceal and construct weapon, rather than used by professional warriors. But even then, a weapon like a staff would be massively more effective in most cases, outside of needing to conceal that you were carrying a weapon. But even in those cases, a knife or sai would arguably be very effective and less likely for one not ultra proficient in the use to accidentally hurt themselves or their companions with it.

Noteworthy here is that when the nunchuck first seems to have popped up in well documented history, many of the nobles were working as so-called “farmer-princes” and merchants in Okinawa. This occurred simultaneous to a scarcity of food and an extreme rise in crime rates. Naturally, said crime was often leveled at these farmer-nobles who at the time were not allowed to carry more traditional weapons- thus, the speculation is that this is what perhaps spurred the use of this weapon.

As the self-proclaimed Nunchaku King, who incidentally has the tagline “Swinging Since 1969″, sums up, “The lack of popularity for the nunchaku probably came from its low effectiveness when used against the staff or other long-reach weapons, not to mention the sword. On the other hand, one who was skilled in nunchaku usage was easily able to defeat a few opponents who were armed with knives or who were unarmed.”

In regards to this latter point, the actual effectiveness of nunchucks as a weapon in real fights is a rather heated argument that continues to this day given, as you might expect, few if anybody in real life these days ever actually uses it in real fights. Thus, without hard data, people on both sides seem somewhat indignant when it comes to admitting either the nunchucks shortcomings or advantages as a tool to kick ass.

Those who believe firmly in the power of nunchucks argue that they’re a formidable and adaptable weapon in the right hands- a very true statement. The other side, however, points out that that’s something you could arguably say about any kind of weapon. Even a pencil in the right hands can be extremely deadly. For example, legendary hitman John Wick once managed to kill three men in a bar with a pencil- a fucking pencil!

So if the nunchuck was never really popular historically, how did it become so? In two words- Bruce Lee. In more words, thanks to this particular weapon’s showmanship, for lack of a better word, and Bruce Lee’s prodigious skill with it, the combo saw it become a favorite for choreographed fight scenes featuring martial artists. It simply had cinematic appeal, similar to countless other fighting techniques and styles that someone who actually knows what they’re doing would never do as many of these would be a good way to stop living if actually used in real life. Perhaps the most famous and egregious thing depicted on this note is basically any sword fighting method ever depicted in almost every single Hollywood sword or lightsaber battle- in film, it’s about what looks cool, not what would actually be effective or not.

As a result of all this, the humble nunchuck became more popular than it had arguably ever been in history in the mid-20th century when Bruce Lee decided to show off what a master at wielding one could do with it in a choreographed fight. The result was not just a general public fascination, but even many martial art forms after that had not previously featured the weapon adopting it because what better way to get kids to pick your martial art school than mimic badass martial arts stars in Hollywood?

On that note, because of the fact that nunchucks, more than many other weapons, pose as much danger to the person wielding them as they do a potential attacker until a certain level of mastery is achieved, this has led to the weapon being banned in several countries, even when other far more deadly weapons are still perfectly legal. In fact, nunchucks were even banned (at least from being shown on TV) in the UK in the 1990s out of fear kids would try to make their own and slap themselves upside the head. Which, to be fair, as a kid in the 1990s, the editor of this piece can attest he did this exact thing on more than one occasion before wising up and deciding to switch to being Donatello, instead of Michelangelo.

And speaking of the Ninja Turtles, in the UK at least, the show Teenage Mutant Ninja Turtles censored Michelangelo’s iconic nunchucks and replaced them with a grappling hook called the Turtle Line, which was also featured in merchandise and the like for the character instead.

Beyond a censorship of nunchucks, the BBC also changed the name of the show to “Teenage Mutant Hero Turtles”. You see, “ninja” was deemed to have too violent of connotations. If you’re wondering, a substitute for “ninja” in the 1987 TMNT song in the UK, among certain other countries, was not “hero” but rather as follows- “Splinter taught them to be fighting teens” as apparently teaching them to be “fighting teens” was “less violent” than teaching them to be “ninja teens”…