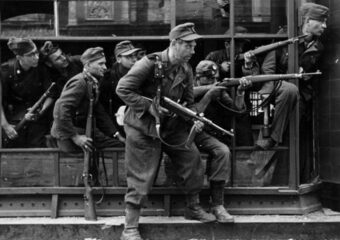 The SS-Sturmbrigade Dirlewanger, better known to historians as simply the Dirlewanger Brigade, holds the dubious distinction of being amongst the most reviled units of the Nazi war machine. Infamous for its brutality and the open sadism displayed by its commanding officer, a man previously imprisoned for raping a young teen girl, the unit and their actions were so detested that even many among the upper echelons of the Nazi high command itself were disgusted by them. So how did this unit come to be, why were they so particularly brutal, and why were they allowed to continue with their horrific acts that horrified pretty much everyone but themselves?

Officially the 36th Waffen Grenadier Division of the SS (or more aptly “under SS control”) were formed in 1940 as an indirect response to an order from Hitler to bolster German manpower with convicted criminals, initially those convicted of minor crimes. However, as the war went on and Nazi Germany became desperate, the ranks of these battalions became decidedly more eclectic with some, like the Dirlewanger Brigade, filling out their ranks with the worst of the worst of criminals, as well as mental institution patients.

Considered by many to be a death sentence, these units were often tasked with the most dangerous jobs the Wehrmacht could think of, such as acting as shock troops in losing battles or to march across minefields to clear them. Any of these soldiers who refused were shot dead on the spot.

When they weren’t being thrown into the meat grinder, Strafbattalions were forced at gunpoint to perform back-breaking manual labor and could expect to be executed for even minor infractions. Men who found themselves serving in Strafbattalions additionally held no rank and fought wearing plain uniforms.

The payoff, however, assuming they managed to survive, was that if they served with distinction, they could potentially have their criminal records expunged and even be given more traditional ranks and re-assigned to units that weren’t more or less suicide squads.

Within the Strafbattalions, however, one unit distinguished themselves via a level of brutality that would make even the most twisted of minds squeamish- something the upper echelons of the Nazi war machine found to be particularly beneficial for the war effort. You see, having a rabid dog at their disposal came in handy in certain situations. And, incidentally here, not totally hyperbole, it’s noteworthy that one tactic the Dirlewangers used was to release starved and abused dogs among civilians, with the dual benefit of some good family fun for the soldiers, getting to watch the dogs tear the people apart, as well as to instill the appropriate fear in the rest of a given local populace as to what would happen to them if anyone further stepped out of line.

This brings us to the commanding officer of the Dirlewanger Brigade- Oskar Dirlewanger, a close friend of Lieutenant General Gottlob Berger, one of the “twelve apostles” of Heinrich Himmler, aka the “architect of the Holocaust”.

Dirlewanger had previously served in WWI where he was wounded six times and otherwise seems to have served with distinction, rising to the rank of Lieutenant. However, after the war, one official report on the man noted he had become, to quote, “mentally unstable, violent… [an] alcoholic” and an abuser of drugs.

In his time between the world wars, he took part in various things like the suppression of the German Revolution, got his doctorate in political science and was frequently convicted of various crimes, such as embezzlement. Things got even more serious when, in 1934, he was convicted of raping a 14 year old girl, then immediately after stole a government car and promptly crashed it as he was quite drunk at the time. He was then imprisoned for a couple years, before being released. Rather than live as a law abiding citizen from there, he almost immediately was convicted of sexual assault once again.

Having friends in high places, such as Gottlob Berger, however, comes in handy, and not long after, he managed to get released and then went to fight in the Spanish Civil War under General Francisco Franco. Thanks to his service during that war, when he went back to Germany, he was reinstated and, eventually, given a group of criminals to command.

His unit was initially composed of a few dozen of these individuals, including poachers- the idea here being that their tracking and hunting skills would translate well to hunting and tracking resistance members and fleeing Jews.

Thanks to their success towards this end in the early going, the Dirlewanger Brigade grew over the course of the war to comprise of 4,000 men at its peak- a group whose numbers eventually included some of the worst of the worst of criminals, as well as men deemed mentally unstable, including asylum patients.

Dirlewanger took full advantage of his position as leader of this ethically challenged unit, engaging in acts of cruelty on an incomprehensible scale. Beyond the aforementioned rabid dog tactic, another even more horrific was gathering together very young girls, stripping them all naked, whipping them to near death, then injecting them with strychnine. After this, it was reported he and his men enjoyed, among other things, watching them convulse to death.

Another tactic was to gather groups of people and cram them into a building, then set it on fire. Any who fled the building after it was set aflame would be immediately shot.

Naturally, even some of the most ardent Nazi ideological supporters got a little squeamish at some of these acts, leading to frequent calls for Direlwanger’s arrest, or at the least the reassignment of the ‘wanger brigade to the front instead of overseeing civilians.

In fact, at one point SS police judge advocate Georg Morgen was so fed up he took it upon himself to issue a warrant for the arrest of Dirlewanger. Naturally, Dirlewanger appealed to Berger, who in turn appealed to Himmler on Dirlewanger’s behalf, reasoning to Himmler in a letter defending Dirlewanger’s actions, “Better to shoot two Poles too many than two too few. A savage country cannot be governed in a decent manner.”

Himmler apparently agreed and Dirlewanger was allowed to continue on and even promoted. In another case, General Heinz Guderian appealed to Hitler himself to get Dirlewanger’s unit withdrawn, reportedly with one of Himmler’s officers backing up Guderian’s assertions about the ‘wangers. Hitler, however, apparently felt the opposite about the unit and rejected the pleas. In a nutshell, the ‘wangers got results when it came to quelling uprisings, tracking down those fleeing, and instilling an extreme amount of fear among the civilians they were let lose upon.

On that note, as alluded to, given their strength was not so much in having well trained soldiers, but rather ones who seemed to lack even an ounce of empathy or moral compass, the duties of the Dirlewanger Brigade throughout most of the war were the suppression of civilian activity throughout Nazi controlled Eastern Europe, with the unit mostly operating in Poland and Belarus.

Perhaps the most infamous event of the war the the Dirlewanger Brigade took part in was the Warsaw Uprising of 1944. During what came to be known as the Wola Massacre, the unit slaughtered thousands of unarmed civilians and engaged in unthinkable acts of cruelty. For example, reports tell of Dirlewanger and his men burning hospital patients alive, gutting screaming women in front of their families and killing an entire pre-school full of children with bayonets and rifle butts. Why this instead of shooting the kids? German Army sapper Mathias Schenck describes this last event and the reasoning behind the method of killing:

After the door of the building was blown off we saw a daycare-full of small children, around 500; all with small hands in the air. Even Dirlewanger’s own people called him a butcher; he ordered to kill them all. The shots were fired, but he requested his men to save the ammo and finish them off with rifle-butts and bayonets. Blood and brain matter flowed in streams down the stairs.

The brutality of the Dirlewanger Brigade is such that we don’t even know how many people they killed during the war, with information gleaned from reports generally estimating the number at between 30,000-120,000 civilians in Belarus and thought to more definitively be around 50,000 people in Poland.

The unit itself lost a small number of men, during this period at least, as the book, Bloodlands: Europe between Hitler and Stalin somberly notes: “As it inflicted its first fifteen thousand mortal casualties, the Special Commando Dirlewanger lost only ninety-two men — many of them, no doubt, to friendly fire and alcoholic accidents. A ratio such as that was possible only when the victims were unarmed civilians.”

For anyone reading this who feels like they need a little schadenfreude to wash the taste of all that information out of their brains, towards the end of the war, the ‘wangers were forced to go up against non-civilians in the form of the Soviets… and well, let’s just say the Red Army saw to it that these bastions of humanity were held accountable for their crimes, almost completely, and extremely rapidly, wiping them out, down to just a couple hundred survivors.

That said, Dirlewanger’s Brigade’s numbers were briefly replenished by a few thousand additions to bring them back up to about 4,000 strong, but once again were soon after slaughtered by soldiers who actually knew what they were doing, with it estimated only about 700 ‘wangers in total surviving the war.

As for Oskar Dirlewanger, after his unit was decimated the second time, he promptly swapped his uniform for civilian clothing, fled, and started going by a different name. Thankfully, he was recognized by a Jewish concentration camp survivor while staying at a hunting lodge not long after. French soldiers promptly arrested him on June 1, 1945.

Now, officially, Dirlewanger died about a week later of injuries he sustained prior to being captured in southern Germany. However, this is largely thought to just be a story to protect a handful of Polish guards at the prison he was being held at. You see, these men allegedly took it upon themselves to beat Dirlewanger until he promptly died of the wounds he sustained before being arrested…