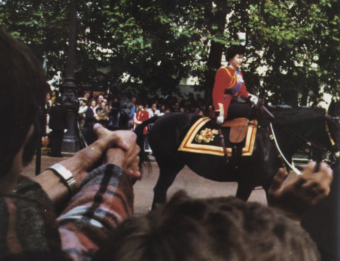 The Queen is likely one of the single best protected people on the entire planet. But on June 13, 1981 a 17 year old young man who held a marksman’s badge from the Air Training Corps somehow managed to circumvent the endless layers of security put in place to protect the Queen and fired a revolver at her from about 10 feet or 3 meters away. In the process, he managed to get not just one shot off, but a half a dozen, completely emptying his gun. So how is the queen still alive today? Well, thanks to strict gun laws in the UK, the young man, one Marcus Sarjeant, could only get his hands on a gun that shot blanks…

So why did he do it? According to Sarjeant, he was inspired to try and kill the Queen thanks to the deaths of John Lennon, JFK, and the attempts on the life of Ronald Reagan and Pope John Paul II. In particular, Sarjeant was intrigued by the subsequent notoriety and fame Mark David Chapman achieved after shooting Lennon and endeavoured to do something similarly shocking so that he’d be remembered as well. Not unique in this, humans have been doing this sort of thing seemingly since humans have been humaning, with perhaps the most notable ancient example being about two thousand years ago when Herostratus destroyed one of the Seven Wonders of the Ancient World just so history would remember him.

Going back to Sarjeant, prior to trying to shoot the Queen, he had received military training, reportedly joining and then quickly quitting both the Royal Marines and Army after 3 months and 2 days respectively. In the former case, he claims he couldn’t take the bullying from his superiors. It’s not clear why he left the Army. After this, Sarjeant tried and failed to become both a police officer and firefighter before working briefly at a zoo- a job he quit after just a few months reportedly because, as with seemingly all teens, he didn’t like being told what to do.

After deciding that shooting the Queen was his ticket into the history books, Sarjeant wrote in his journal, “I am going to stun and mystify the world with nothing more than a gun… I will become the most famous teenager in the world.”

Decision made, Sarjeant set about trying to get a hold of a gun with which to accomplish the task. Fortunately for the Queen, he was unable to do this thanks to strict UK laws related to gun ownership and the sale of live ammunition. Thus, he was both unable to acquire bullets for his father’s revolver and unable to acquire one of his own, even after successfully joining a gun club. Eventually, he did manage to purchase a Colt Python replica, which was modified to fire only blanks.

Despite the unmistakable handicap of not having a working gun, Sarjeant charged ahead with his plan to assassinate the Queen anyway, posing for pictures with his newly acquired firearm, as well as his father’s that he had no bullets for. He then sent these to a couple magazines along with a letter about what he was going to do. He also reportedly sent a letter to the Queen stating, “Your Majesty. Don’t go to the trooping of the color today because there is an assassin waiting outside to kill you”. This is a letter we should note didn’t arrive until 3 days after Sarjeant tried to shoot the Queen.

As for the day of the Trooping the Colour ceremony, Sarjeant waited patiently for the Queen who he knew would be vulnerable due to the fact that she would be riding a horse in the open, and not in her usual well-guarded carriage. As soon as Sarjeant spotted her Majesty, he rushed forward and fired all 6 blanks his gun held at her, something that understandable startled the Queen’s 19-year-old horse, Burmese.

The Queen, showing why she is often considered an ambassador for British stoicism, didn’t really react much other than calming her horse and then continuing on all smiles as if nothing had happened.

If you watch the live news reporting of the event, the BBC broadcaster likewise exhibits this same stereotypical British reaction, directly after the shots were fired calming saying, “Hello, some little disturbance in the approach road… Burmese receiving a reassuring pat from her Majesty Queen, but he’s a very experienced, wise old fellow…” And then, much as the Queen had done, continuing on as if nothing significant had just happened.

Of course, seconds after the shots were fired, the Queen’s personal guard tackled Sarjeant and began treating him as you might expect her guard would a man who had just seemingly tried to kill their charge. Sarjeant reportedly later told the guards his reasoning for the assassination attempt- “I wanted to be famous. I wanted to be a somebody.”

Sarjeant was ultimately taken to jail where he had to be held in solitary confinement for his own protection, as apparently even British prisoners don’t take kindly to someone taking pot shots at the queen.

When it came to the trial, because Sarjeant’s gun only held blanks, he couldn’t technically be tried for attempted assassination. As a result, Sarjeant was instead tried under Section 2 of the Treason Act of 1842, for “wilfully discharging at the person of Her Majesty the Queen a cartridge pistol, with intent to alarm her”.

Funny enough, this act came about in the first place because of people taking pot shots at Queen Victoria, most notably when one John Francis on May 29, 1842 chose to point a gun at the Queen, but not fire. The next day, he did the same thing, but this time discharging his weapon, but without apparent attempt to actually hit her, at which point he was arrested and tried for treason. A mere two days later, another individual, John William Bean, did the same thing, except, again, there was no risk to the queen. In this case, Bean had loaded the weapon with paper and tobacco.

The problem here was that, while neither of these instances were individuals actually trying to kill the queen, they nonetheless were being charged with treason, a conviction of which meant death. This was something Prince Albert, husband of Queen Victoria, thought was too harsh, which ultimately led to the passage of the Treason Act of 1842. This had lesser penalties for discharging a fire arm near the monarch with intent to startle said monarch, rather than kill. As for the sentence if convicted, this included a flogging and a maximum prison sentence of 7 years.

Going back to Sarjeant, said Lord Chief Justice Geoffrey Lane to Sarjeant during the trial,

I have little doubt that if you had been able to obtain a live gun or live ammunition for your father’s gun you would have tried to murder her majesty. You tried to get a license. You tried to get a gun. You were not able to obtain either. Therefore, for reasons which are not easy to understand, you chose to indulge in what was a fantasy assassination…. You must be punished for the wicked thing you did.

In the end, while Sarjeant did apologize for what he’d done in court and would later write a letter to the queen apologizing directly, he was nonetheless sentenced to five years in prison, though at least got out of the flogging part of the possible punishment. Sarjeant ultimately only had to serve three years, the majority of which was spent at Grendon Psychiatric Prison in Buckinghamshire.

After he got out of prison in October of 1984, he changed his name and very deliberately disappeared from the public eye, his desire for fame evidently having been quashed during his time being held at Her Majesty’s leisure