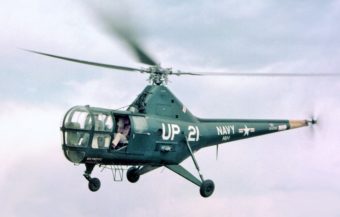 While it might seem a little odd at first glance, it turns out the first helicopter pilot ever to receive the United States’ prestigious Medal of Honor, John Kelvin Koelsch, was born and and mostly raised in London, England. Considered an American citizen thanks to his parentage, Koelsch moved back to the US with his family in his teens, and soon after studied English at Princeton.

Described by his peers as “a man men admired and followed” Koelsch was a physically imposing individual who excelled at athletics and reportedly possessed a daunting intellect and a keen wit. Seemingly destined for intellectual greatness, Koelsch’s original plan was to become a lawyer, but he ultimately decided to join the war effort during WWII, enlisting with the U.S. Naval reserve as an aviation cadet on September 14, 1942. He quickly rose through the ranks and was noted as being a terrifyingly effective torpedo bomber pilot.

Following WW2, Koelsch continued to serve with the Navy, though not before returning to Princeton to complete his degree.

At the start of the Korean War, Koelsch retrained as a helicopter pilot and ended up serving aboard, somewhat ironically, the USS Princeton.

Specialising in helicopter rescue, after what has been described as a “long tour of duty” aboard the USS Princeton, Koelsch turned down an offer to return to the United States with the rest of his squadron, simply telling his superiors that he wanted to remain until the job was done.

His request granted and with the rest of his squadron back in the United States, Koelsch was transferred to the Helicopter Utility Squadron Two, a detachment of which he was put in charge of.

Not just a great pilot, Koelsch also tinkered extensively with his own helicopter, customising it to handle the Korean weather better, as well as perform better at extremely low altitudes so as to make spotting injured comrades easier during rescue missions.

In addition, Koelsch had a hand in inventing a number of devices to make rescuing people caught in specific circumstances via helicopter easier, such as the so-called “horse collar” hoist and a floating sling for water-based rescues.

This all brings us around to July 3, 1951. The ship Koelsch was stationed on received a distress call from a downed Marine Captain called James Wilkins. According to reports, Wilkins’ Corsair had been downed during a routine reconnaissance mission and he had been badly injured, suffering a twisted knee and severe burns over the lower half of his body.

Unsurprisingly for a man who once stated “Rescuing downed pilots is my mission” in response to a question about why he took so many risky rescue missions, Koelsch immediately volunteered to attempt to go after Wilkins. His superiors, on the other hand, noted, amongst other things, that rescuing Wilkins would be near impossible due to the heavy ground resistance expected, Wilkins being deep in enemy territory, and the rapidly approaching night and thick fog making it unlikely he’d spot Wilkins even if flying right over him.

Despite all this, Koelsch loaded up his Sikorsky HO3S-1 and set off with his co-pilot, enlisted airman George Neal to at least make the attempt.

Described diplomatically as “slow moving”, Koelsch’s helicopter was both unarmed and travelled to Wilkins’ location without a fighter escort due to the aforementioned heavy fog that day making such an escort impossible. On that note, even without enemy fire, this combination of fog, approaching night, and mountainous terrain also made flying in those conditions exceedingly dangerous.

Nevertheless, flying as low as 50 feet above the ground at some points so as to make spotting Wilkins’ downed Corsair easier through the mist, the sound and sight of Koelsch’s helicopter lazily buzzing through the air caught the attention of Wilkins (who’d been hiding in the woods from North Korean forces), prompting him to return to the parachute- his reasoning being that this would be the easiest thing for his rescuer to see.

However, Koelsch brazen flying not far above the heads of nearby enemy forces saw them almost immediately begin firing at him as he came close to the region where Wilkins had been downed. Instead of, you know, getting out of range or doing anything whatsoever to protect his own life, when Koelsch located Wilkins, he simply hovered above him, weathering the hailstorm of bullets directed at himself and his chopper, and signaled for Wilkins to grab the hoist which had been lowered by Neal. As Wilkins would later note – “It was the greatest display of guts I ever saw.”

Unfortunately, it turns out helicopters don’t fly very well when the engine is riddled with bullet holes, and as Neal was winching Wilkins up, this is exactly what happened, causing the helicopter to crash.

Perhaps a problem for mere mortals, Koelsch was able to make something of a controlled crash into a mountainside, with himself and Neal avoiding any significant injuries, and Wilkins not suffering any further injuries as the chopper smashed into the ground.

Following the crash, Koelsch took charge of the situation and the trio fled the enemy forces, all the while taking special care to ensure Wilkins didn’t over exert himself. Koelsch and his cohorts managed to avoid capture for 9 days, eventually making their way to a small Korean fishing village. However, this is where the groups luck ran out and all three men were found hiding in a hut by North Korean forces.

During their march to a POW camp, Koelsch had the audacity to demand their captors provide Wilkins with immediate medical attention. After enough angry shouts from Koelsch, the North Korean soldiers eventually did just this; Wilkins would later credit Koelsch’s insensate and vehement pestering of their captors to give medical aid as something that ended up saving his life.

When the group reached the POW camp, Koelsch, despite being malnourished from his 9 days on the run with few supplies, shared his prisoner rations with the injured and sick, reportedly stating simply that they needed the food more than he did.

We should note at this point that Koelsch continued to do this while being periodically tortured by his captors for his refusal to cooperate in any way with them. When he wasn’t being tortured, Koelsch also continually argued with said captors about their mistreatment of his comrades, citing the Geneva Conventions. His refusal to shut up about this reportedly earned him a number of extra beatings.

Unfortunately, it all ended up being too much and Koelsch succumbed to a combination of malnutrition and dysentery, dying in October of 1951, about three months after his capture.

As for his companions, Neal and Wilkins ended up surviving the war.

In 1955, when the full extent of Koelsch’s actions and exemplary conduct while a prisoner became known, the decision was made to posthumously award him the Medal of Honor, with it noted that, beyond the selfless heroism displayed in the rescue attempt, “Koelsch steadfastly refused to aid his captors in any manner and served to inspire his fellow prisoners by his fortitude and consideration for others. His great personal valor and heroic spirit of self- sacrifice throughout sustain and enhance the finest traditions of the United States naval service.”

Koelsch’s remains were returned to the United States in 1955 by the Koreans and were interred at Arlington Cemetery, an honor reserved for all Medal of Honor awardees.

Further honors bestowed upon Koelesh include a Navy destroyer escort being named after him, as well as a flight simulator building in Hawaii.

Perhaps the most fitting honor though is that Koelsch display of stoic resilience in the face of unthinkable abuse, as well as his general conduct while a prisoner, served as one of the inspirations for the content of the 1955 Code of Conduct for American POWs which, among other things states:

If I am captured I will continue to resist by all means available. I will make every effort to escape and aid others to escape. I will accept neither parole nor special favors from the enemy.

… If I become a prisoner of war, I will keep faith with my fellow prisoners. I will give no information or take part in any action which might be harmful to my comrades. If I am senior, I will take command. If not, I will obey the lawful orders of those appointed over me and will back them up in every way…. When questioned, should I become a prisoner of war, I am required to give name, rank, service number and date of birth. I will evade answering further questions to the utmost of my ability. I will make no oral or written statements disloyal to my country and its allies or harmful to their cause…. I will never forget that I am an American, fighting for freedom, responsible for my actions, and dedicated to the principles which made my country free.