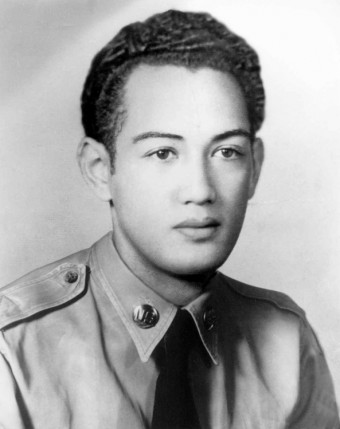 Hollywood often makes up stories about nigh-unkillable, enemy-stomping individuals who laugh in the face of certain death, only to deliver that death to countless bad guys instead. In real life, if you put a single individual up against a large contingent of well armed soldiers, the soldiers tend to effortlessly dispatch said individual, no matter how much courage and determination he possesses. But then, there is the story of 22 year old Herbert K. Pililaau who for one day might as well have been Captain America without the shield.

Born into a large 14 child family in the Waianae area of Honolulu in 1928, Herbert K. Pililaau was, according to those who knew him best, a quiet, unassuming child who liked to listen to classical music and keep to himself. In a 1989 interview with his many siblings, Pililaau was described by his family as a “sweet boy” who “couldn’t kill a fly”, and his brothers noted that he would often abstain from joining in with their rough-housing, preferring his own company to that of others.

In 1951, Pililaau was drafted along with 4,000 other Hawaiians to serve in the Korean war. Due to his deeply held Christian beliefs, Pililaau initially toyed with the idea of declaring himself a conscientious objector. However, for reasons known only to him, he decided against this and went ahead and reported for duty. During basic training, Pililaau’s peers were amazed when, against all expectations, he proved to be the most physically strong and fit member of his entire company. Despite this, the 6 foot tall Hawaiian man-mountain remained stoic and humble, “rarely socializing with the other men“, spending the majority of his free time reading the Bible or writing letters home to his family.

Just a few months after starting basic training, in March of 1951, Pililaau was sent to North Korea with the rank of Private First Class to join the 23rd Infantry Regiment. Upon arriving in Korea, Pililaau formally volunteered to be his company’s automatic rifleman, a risky and dangerous position that would see Pililaau facing the brunt of the enemy’s fire-power. When asked why he was so willing to volunteer for such a job, Pililaau very matter-of-factly explained: “Someone had to do it.“

As part of the 23rd regiment, Piliaau and his company played a key role in the now famous Battle of Bloody Ridge, in August of the same year. However, it was about a month later at the so-called Battle of Heartbreak Ridge that Pililaau would go all Hollywood on the enemy troops.

In the early hours of September 17, 1951, Pililaau’s position on top of a strategic hilltop was ambushed by North Korean soldiers. After a prolonged skirmish, his unit was forced to retreat. They then regrouped and charged the hill, with Pililaau leading the headlong assault.

By midday, Pililaau’s unit were again forced to retreat by yet another platoon of North Korean soldiers intent on taking the hill, which is when Pililaau made the decision that would make him a legend. A little after midday, Pililaau turned to his comrades and told them that he would stay and cover the retreat. As the U.S. soldiers retreated, he opened fire on the advancing enemy with his M1918 Browning Automatic Rifle.

After safely executing their withdrawal, the U.S. soldiers watched helplessly from about 600 feet down the hill as Pililaau expended his ammunition. Out of bullets, he began hurling grenades at the closing troops. When Piliaau ran out of grenades, he began throwing rocks. When the enemy soldiers were nearly on top of him, he drew his trench knife and charged, stabbing with one arm and punching with the other. As his squad leader noted,

There was Herb standing up, fighting a lot of the enemy.  It was hand-to-hand and just Herb against all of them.  We all wanted to go back up to help him, but the captain said, “No.”  We tried to help Herb by firing a few shots, but they didn’t do any good.  All of the sudden, they shot him and when he went down, they bayonetted him.  That was it.

The next day, U.S. soldiers found Pililaau’s body… and the bodies of about 40 North Korean soldiers he managed to kill before the advancing army had been able to take him down.

For his heroics, Pililaau was awarded the congressional Medal of Honor, making him the first Hawaiian to win that prestigious award. According to his siblings, Pililaau’s family initially didn’t believe that he was capable of such a ridiculous act of badassery and they were reportedly stunned upon hearing the news that the quiet, unassuming child they’d known before the war had died in ferocious hand-to-hand combat.

What didn’t surprise Pililaau’s mother, though, was the news of her son’s death. According to Pililaau’s sister, Mercy, their mother stated she had a dream the night he died, in which Pililaau came to her and explained that his time had come. No doubt every soldier’s loved ones often have such dreams when they know the soldier is off at war; but in this case, unfortunately, hers came true.