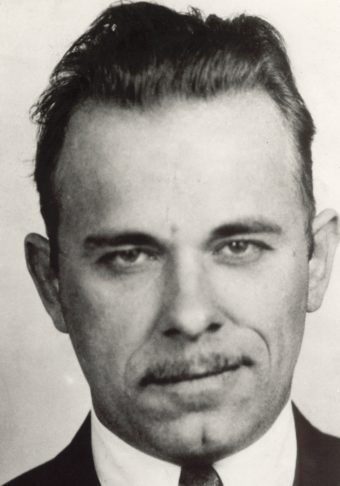 It was a record-breaking hot July night as three people, one man and two women, exited Chicago’s Biograph Theater. They had just seen Manhattan Melodrama, a crime film starring Clark Gable. As they left the theater at about 10:30 pm, a man standing at the door lit a cigar. While seemingly an innocent act, it was a signal. With little delay, FBI agents started closing in. They were about to end the reign of one of the most famous bank robbers in U.S. History, John Dillinger.

The story of Dillinger has been immortalized in numerous documentaries, books, and film. He’s been compared to Robin Hood for his habit of stealing from powerful banks during the Great Depression. Dillinger has been romanticized and turned into a legend. But, in truth, his life and his ultimate demise at the hands of the FBI was violent and brutish. His story ends not with him standing up for something, but by being double-crossed by a brothel owner under threat of being deported. Here’s the rather odd tale of how John Dillinger was finally caught – and killed – by the FBI.

Dillinger was pretty much always a troublemaker. Growing up in the city of Indianapolis, he frequently got in trouble for petty crimes like stealing chickens, fighting, and apparently once roping a “farmer’s outhouse to a freight train with predictable results.”

His mother died when he was four years old and, at least, one biographer accuses Dillinger of committing a lot more than small offenses as a young teenager (i.e. stealing coal, assault, and gang rape).

Thinking the big city was a problem, his extremely strict father, who apparently took the “spare the rod, spoil the child” parenting style to the extreme, moved him to the small farming community of Mooresville, Indiana. Resentful, Dillinger stole a car from a couple who went to the same church and drove back to Indianapolis. Luckily for him, no charges were pressed in the incident.

Perhaps trying to straighten out his act, or just get away, he enlisted in the Navy and was assigned to the USS Utah (which would be sunk two decades later in Pearl Harbor).

He couldn’t deal with the discipline there and was ultimately dishonorably discharged. He returned home to Mooresville and, while he married, he began to hang with a bad crowd.

Not long after, the turning point of his life occurred on one September night in 1924. In a nutshell, he got really drunk with a friend and robbed a local grocer, netting the pair $50 (about $720 today).

Unfortunately for him, he and his companion were recognized while fleeing the store and the pair found themselves in jail the next day. Also unfortunately for Dillinger, without consulting a lawyer, he took his father’s advice to admit to the crime and plead guilty. His father, a church deacon, had apparently spoken with the Morgan County prosecutor and seemingly secured a vague deal for leniency if Dillinger confessed.

Instead, once Dillinger pled guilty, they pretty much threw the book at him. For the minor assault on the grocer and petty robbery, he got a 10 year prison sentence, of which he served nine and a half years before being paroled.

In jail, he was written up often for infractions like gambling, crude language, and not obeying orders. He even attempted to escape once. More important to his future life, he befriended other criminals, many of which he would work with during his infamous robberies.

Needless to say, when he was released from prison in 1933, he immediately went back to a life of crime. (Although, to be fair, he had little other opportunities due to the Great Depression.)

At some point in the summer of 1933, he began his bank robbing spree. It’s unclear if he was involved in as many as the many stories say he was, but he was identified in a July 1933 robbery. And, so, the legend of John Dillinger was on its way.

In one year – between summers of 1933 and 1934 – Dillinger and his “gang” were involved in at least 12 different bank robberies. On top of this, his little crime spree included three widely ambitious prison breaks, one of which he provided intricate plans for his friends still stuck in prison. (They murdered two people on their way out). The other two were to free Dillinger and which included impersonating police officers.

Every time Dillinger broke out, he went back to robbing banks and the FBI went back to trying to catch him. A manhunt commenced as authorities tracked him from St. Paul to Mooresville to Chicago. A reward of $10,000 (a bit under $200,000 today) was being offered for any information that led to his capture.

Finally, on July 21, 1934, law enforcement got a call from a woman in Gary, Indiana who called herself Ann Sage. She said she had information about Dillinger, but wanted a couple guarantees first. A few years earlier, she had come to the United States from Romania with her husband, but soon found herself divorced and working as a prostitute. She later expanded to running her own brothel, which ultimately got her threatened with deportation for “low moral character”.

To get around the problem, she noted she would be willing to tell the FBI what she knew for the promised cash reward (which ended up being $5,000, instead of the $10,000 Sage was promised) and if they’d see to it she wouldn’t be deported. They agreed to her terms, though later would do pretty much nothing to help her out with the latter stipulation, ending with her being deported.

Nevertheless, the agreement struck, she told them that a friend of hers, Polly Hamilton, was shacking up with Dillinger in Chicago. Earlier in the week, they had both visited her brothel and Sage had recognized him from the newspapers. On top of this, Sage was going to accompany the new couple to the movies – either at the Biograph or Marbo Theater, she wasn’t yet sure –  on the next night. For identification purposes, she would wear an orange dress, though would later be nicknamed in the press “the lady in red.”

It had been a record-breaking 109 degrees Fahrenheit in Chicago that day. Advertising that the theater was “cooled by refrigeration,” the 8:30 pm showing of Manhattan Melodrama was crowded. Dozens of FBI agents loitered outside of the theater, hidden in plain sight, attempting to catch a glimpse of Dillinger.

It was there, in various spots, the agents waited for Dillinger to come outside. At about 10:40 pm, he did just that. Seeing him, the agent by the door lit his cigar signaling advancement.

No one is quite sure the exact details of what happened next. Some think the cigar-lighting agent said something to Dillinger to clue him in that he was done for. (Witnesses said Dillinger turned to look at the man before supposedly reaching for his gun.) Others claim that Dillinger just ran, rather than pull a weapon and, therefore, it was unnecessary to shoot him multiple times. (Two bystanders were also shot in the ensuing melee.)

According to the official FBI statement, Dillinger ran for the alley as he reached for his gun. Five shots were fired from three FBI agents, three of which hit Dillinger. He landed facedown at the entrance of the alley. The 31 year old John Dillinger was pronounced dead less than 15 minutes later. To this day, no one really knows whose shot was the one that killed the most famous bank robber in US history.

As a point of pride, Dillinger’s corpse was put on public display at the city morgue. Thousands came to see the dead body of the notorious criminal. He was later buried at Crown Hill Cemetery in Indianapolis under four layers of iron and concrete to prevent his grave from being robbed. Today, Dillinger’s death mask (when plaster was poured on the face of a dead person to preserve their features and a common thing that was done to famous dead people up until the mid-20th century) is one of the most famous in history and a popular attraction at the Crime Museum in Washington D.C., even today.