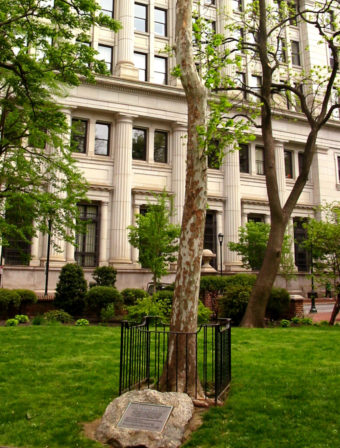 Only nine months after the near-disaster of Apollo 13, NASA decided to try again with Apollo 14. For the mission, three astronauts were chosen – Edgar Mitchell, Alan Shepard, and Stuart A. Roosa.  Shepard had already earned international fame for being the first American, second human overall, in space in 1961, funny enough soaking in his own urine owing to delays in the launch and no bathroom facility on board… Mitchell and Roosa were both accomplished pilots and engineers.

Important to the topic at hand is that years before any of this, in 1953, Roosa took a summer job as a smokejumper for the US Forest Service. It was because of this connection that when it was announced that he’d be a member of the Apollo 14 crew, he was approached with an interesting proposal.

Ed Cliff, the Chief of the Forest Service, called Roosa and asked if he’d be willing to take a metal canister filled with 500 seeds with him aboard Apollo 14. The seeds in question consisted of Douglas fir, sequoia, sycamore, sweetgum, and loblolly pine. Stan Krugman, who worked at the U.S. Forest Service and was put in charge of selecting the seeds, noted, “I picked redwoods because they were well-known, and the others because they would grow well in many parts of the United States. The seeds came from two Forest Service genetics institutes. In most cases we knew their parents (a key requirement for any post-flight genetic studies).”

On that note, a group of control seeds were also kept back on Earth to compare with.

Besides being great publicity, the hope was to use these seeds to study how trees would grow back on Earth after being exposed to space travel. Krugman noted,  “The scientists wanted to find out what would happen to these seeds if they took a ride to the Moon. Would they sprout? Would the trees look normal? We also wanted to give them away as part of the [U.S.] Bicentennial celebration in 1976.”

As each astronaut was allowed to carry with them a Personal Preference Kit (essentially just a small number of personal items) and the seeds were otherwise innocuous, NASA officials gave the idea their blessing and Roosa agreed to take them along for the ride. In the end, the seeds orbited the Moon 34 times in the command module Kitty Hawk at the same time Shepard was on the lunar surface taking chip shots with a couple of his personal items- golf balls.

On February 9, 1971, Apollo 14 splashed down in the South Pacific Ocean with neither the drama nor danger of Apollo 13. Unfortunately, during the decontamination process back on Earth, the seed-holding metal canister burst open when exposed to a near vacuum environment, scattering all the seeds. Krugman classified the seeds as being “traumatized” and it was speculated that the exposure to the extreme low pressure may have killed any chance of the seeds germinating. But after careful separation and cleaning, they were planted anyway- almost all of them grew.

Over the next few years, the saplings were distributed across the world, though most went to places in the United States, particularly near state capital buildings, where they were often planted in conjunction with 1975 and 1976’s bicentennial celebrations. One was planted in Washington Square in Philadelphia, another at a Girl Scout Camp in Indiana, and another at a Boise, Idaho elementary school. A few went to New Orleans, at the request of the city’s Mayor who was nicknamed “Moon.” Yet another was sent to the Siskiyou Smoke Jumpers Base in Oregon near where Roosa had briefly worked a couple decades before.

A “Moon Tree” was also planted in front of the White House with President Gerald Ford calling the trees “living symbol[s] of our spectacular human and scientific achievements.”

Beyond that, one was given to the Emperor of Japan, Hirohito, as well as sent to various countries where official requests were made.  In fact, the number of groups wanting Moon trees was so great that they ended up taking cuttings from the remaining Moon trees to make so-called “half-Moon” or second generation Moon trees to give out.

After the initial hoopla, however, the “Moon Trees” were mostly forgotten. This was partially due to the fact that the trees grew like every other tree, just as swiftly and with the same coloring as any old Earth-bound tree. In some cases, the control trees were even grown next to Moon trees with no significant difference between them, other than that some are marked by a plaque, noting their historic significance.

Unfortunately, nobody bothered to keep a list of where all the trees were sent and planted.

To try to rectify the issue of the missing Moon trees, in the mid-1990s, NASA astronomer Dave Williams went looking for them and put together a database to keep track of the ones he found. It turns out many were not marked and, therefore, were growing with almost nobody seeming to realize what they were – including one right outside of Williams’ office at the Goddard Space Center in Maryland. “I had no idea it was there,” Williams stated in 2002.

The database currently has 77 trees documented. Williams also found several trees that are no longer with us due to being victims of hurricanes (Hurricane Katrina in New Orleans) and development (several Moon trees were bulldozed without anyone realizing their significance at the time).

Obviously with 500 original seeds (not to mention the many cuttings taken from them) and only 77 trees currently known, there are likely hundreds of Moon trees still out there, along with many more made from cuttings of the originals.

On that note, one of these second generation Moon trees was planted in 2005 at the Arlington National Cemetery near the grave of Roosa who died about a decade earlier. Nearby is a plaque that reads, “in honor of Apollo astronaut Stuart A. Roosa and the other distinguished Astronauts who have departed our presence here on Earth.”

It is noteworthy that given there are only 12 people alive today that have been to the Moon (four remaining who have walked on it) and all of whom are over the age of 82, if we don’t go back soon, the Moon trees will be the only living things left on Earth that have been to the Moon, even if only orbiting. As for one of Roosa’s sons, Jack, he notes, “These trees will be here 100 years from now. By then I believe we’ll be planting Mars trees right beside them.”