Trepanning with John and Yoko 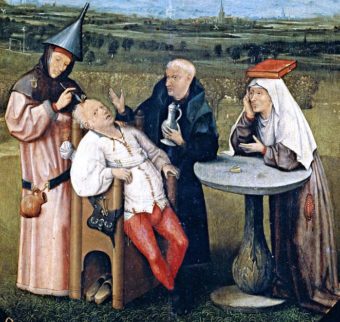 THIS IS NOT A DRILL

In March 1969, John Lennon and Yoko Ono spent their honeymoon at a posh hotel in Amsterdam, where they staged their infamous “Bed-in for Peace.” Among the reporters and well-wishers that Lennon invited was a 34-year-old Dutchman named Bart Huges. He was summoned there because the Beatle had a strange request: “I want a third eye.”

Lennon wasn’t talking about a metaphorical, spiritual third eye, but an actual hole drilled in his forehead. This controversial procedure is called trepanation.

Trepanning (from the Greek trypanon, “a borer”) has been practiced since prehistoric times to treat everything from headaches to demons. But in the late 1960s, trepanation became something of a fad for the burgeoning New Age movement. The best known among them was Huges, a Dutch librarian who had been expelled from medical school a few years earlier for his rampant drug use.

In 1964 he published a “scientific” paper—in scroll form—called “Homo Sapiens Correctus,” in which he claimed that ever since humans learned to walk upright, gravity has prevented enough blood from flowing up to the brain, and that drilling a hole in the forehead would relieve pressure and thus increase “brainbloodvolume.” Or something like that. The benefits: increased energy and creativity, and even better: a “permanent high.” Marijuana and LSD are temporary, Huges preached; trepanation is forever.

John Lennon, who was well known for trying to find new ways to expand his consciousness, really wanted Huges to drill a “third eye” in his head. As much of a kook as Huges may have been (and according to pretty much every medical professional, he was a kook), he warned Lennon against the procedure, telling him, “I am certain you already have it. Third eye people are your kind of people.”

Metaphorically, Huges was speaking about the Beatles’ and Lennon’s massive influence on popular culture. But the “it” to which he was specifically referring is an actual hole in about 10 percent of adults’ craniums known medically as a fontanel. A better-known term is “soft spot,” which all babies have. A fetus’s skull is connected in sections, and the fontanel helps relieve the pressure of the rapidly growing brain (it also helps the head fit through the narrow birth canal).

Most people’s skull plates have fused together by adulthood, which is why Huges recommended trepanation. However, he insisted that Lennon still had his…hole. “But John kept wanting it,” Huges recalled many years later, “and I kept telling him, ‘Don’t drill it. It’s a deception. You will notice no difference!’ ” It wasn’t until Yoko Ono took Huges’s side that Lennon let the matter go.

Later, back in England, John and Yoko invited Paul and Linda McCartney over for dinner one night, and Lennon brought up the subject again. “You fancy getting the trepanning thing done?” Lennon asked.

McCartney had no idea what he was talking about, so Lennon explained, “Well, you kind of have a hole bored into your skull and it relieves the pressure.”

McCartney thought he was kidding.

“No, this isn’t a joke,” Lennon assured him. “Let’s go next week, we know a guy who can do it, and maybe we can all do it together!”

McCartney politely refused: “Look, you go and have it done, and if it works, great. Tell us about it and we’ll all have it.”

So did John Lennon ever go through with the procedure?

All reports point to no.