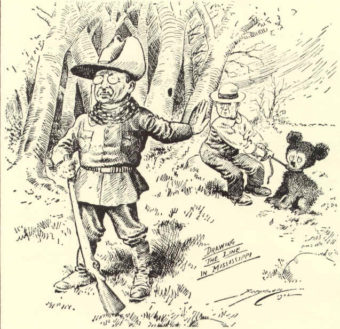 In this episode of The Brain Food Show podcast, we wrap up our discussion (for now) on one of the more remarkable individuals in modern history- Theodore Roosevelt. In particular we look at the truth about how and why the Teddy Bear was named after him and a boatload of fascinating Teddy Roosevelt facts conclusively demonstrating he was more awesome than we could ever hope to be. And as a little bonus to the Bonus Facts at the end, we discuss what the famous song The Rose has to do with the undisputed greatest show of all time- Star Trek the Next Generation.

(Also we very casually allude to the fact that Teddy Roosevelt probably helped delay WWI by several years, but then completely forget to mention HOW he did it later on. We’ll remedy this in an upcoming episode. And let’s be honest, there’s always more interesting stuff to talk about concerning Teddy Roosevelt, so I’m sure we’ll come back to him for more episodes at some point in the future as well.)

And as mentioned in the episode, here’s the Wikipedia page on various forced sterilization campaigns by nation.