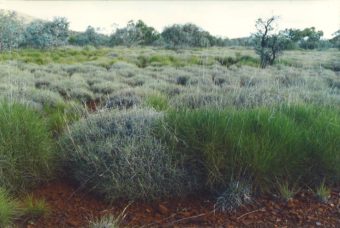 Pezoporus occidentalis, better known simply as the “night parrot”, is often described by ornithologists as being the most mysterious and enigmatic bird on Earth- a moniker the night parrot earned by being so rare and elusive that fewer people alive today have seen one with their own eyes than have ever walked on the Moon.

Described bluntly by one of the few people to have handled one as a “dumpy oversized budgie”, the unassuming greenish-yellow bird is endemic to Australia, with confirmed sightings largely being limited to the deserts of Western Australia and Queensland.

Unusually for a bird that is capable of lengthy and extremely fast flight, the night parrot spends much of its time on the ground hiding amongst the brush and shrubland of the Australian outback, making the species one of only three known “ground parrots” as they’re commonly known.

That said, a very recent tagging of one of these birds which provided GPS data for the animal for 15 days demonstrated that, as mentioned, the night parrot can cover a lot of ground very quickly, with the shortest distance the tracked bird flew in one night being approximately 40 kilometres (about 24 miles). As for this travel, it would seem the purpose behind it is generally to find water. Its food, on the other hand, is speculated to be things likes the seeds of Triodia grasses that it likes to hide in.

Speaking of its nocturnal movements, as you may have guessed given the night parrot’s name, the bird is described as being a mostly nocturnal creature, generally hiding in tall foliage during the day, with their coloring patterns blending in well with such shrubbery.

First “discovered” in 1845 by members of an expedition trying to find a “mythical sea” that supposedly existed somewhere in the heart of Australia (an amazing story we’ll no doubt cover another day), the bird was seemingly quite common at the time, with over a dozen specimens being easily collected in the 1870s alone. In fact, the indigenous Maiawali people are known to have once made extensive use of the night parrot’s feathers for ceremonial clothing.

For reasons experts can’t quite agree on though, around the turn of 20th century the bird almost completely disappeared, with the last live specimen caught in that century being captured sometime in 1912. As to where the bird went, it’s speculated it was simply displaced by humans or perhaps hunted to near extinction by feral and domestic cats, but nobody really knows. In fact, there have been some who have speculated that perhaps the bird isn’t endangered at all; it’s just extremely good at hiding.

That said, after that 1912 capture of a live specimen, while amateur bird watchers sporadically claimed sightings of the parrot, as the century stretched on with no well documented sightings occurring despite many pro bird-nerds conducting extensive searches, many experts began to write-off the bird as being extinct.

Not willing to accept this, in 1989 Australian businessman, entrepreneur, and conservationist Dick Smith offered a $25,000 reward to anyone who could provide proof that the bird was still out there somewhere. A year later, this proof was found almost entirely by accident when three ornithologists decided to randomly pull over to pee while driving through south-west Queensland. During their little wizz break, they stumbled upon a dead night parrot by the side of the road.

As if that wasn’t fortunate enough, it’s noted that the only reason the ornithologists were even able to identify the bird at all is because two of them just so happened to be “among a handful of people in the world to have handled stuffed night parrots”.

Dick Smith dutifully paid the men the reward money (which they in turn donated to the university they all worked for) and Australia’s ornithologists once again began searching for the night parrot with vigor.

The next reasonably well documented sighting occurred in 2005 when a pair of biologists claim to have spotted not one, but three night parrots while the scientists were studying a region for potential iron ore mining.

A much better documented sighting occurred in 2006 when another specimen was found dead by a park ranger, Robert Cupitt, working in Diamantina National Park. Oddly, this bird was found without a head, seemingly flying into a barbed wire fence at high speed and, it is generally thought, decapitating itself. However, a search for the bird’s head proved fruitless, and it is possible the bird simply had its head eaten off by some wild animal or it was otherwise eaten after it was removed by the fence wire.

Whatever the case, after several more years of nothing but unsubstantiated reports of the night parrot from enthusiastic bird watchers, wildlife photographer and ornithologist John Young became the first human in over a century to definitely have seen a living night parrot when he managed to snap a photo of one in 2013. By his own estimation, Young spent some 15 years and around 17,000 hours searching for the bird in the Australian outback, eventually managing to get a handful of photos of one, a few seconds of footage of it in flight, and sound recordings of its call. (For the curious, the night parrot is variously described as sounding like everything from a bell going “ding ding” to a croaking frog.)

Since 2013, several more confirmed sightings of live night parrots have been recorded with an ecologist called Dr Steve Murphy even managing to capture one and tag it for study in 2015. Murphy caught the bird (which he affectionately called Pedro) with the help of his wife Rachel, but refused to divulge where exactly Pedro was spotted except to a select few, including fellow ecologists, ornithologists and academics. (You can see a picture of the night parrot here.)

Seemingly the information must also have been divulged to some politicians, because to protect Pedro and his kin, the Pullen Pullen Reserve was established consisting of some 56,000 hectares of land in Queensland around the area Murphy found him.  However, the exact location of the reserve has never been publicly released because of course Australia has empty areas of land so vast that they can reserve approximately 140,000 acres (560 kilometres squared) for wildlife without needing to tell the public where it is.