The Truth About the Road Not Taken, The Rose / Star Trek connection, What “Trump” Means in the UK, and more in Yet Another 10 Quick Facts 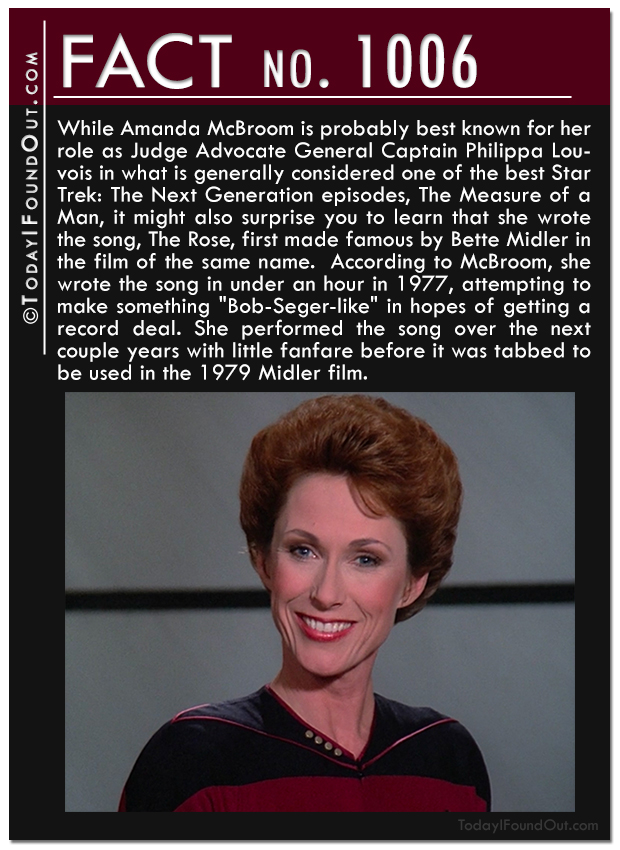 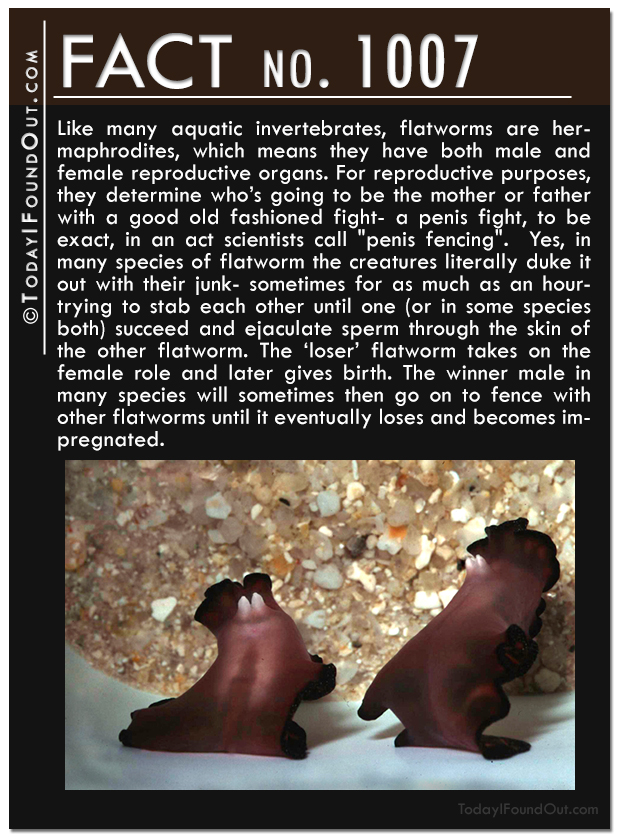 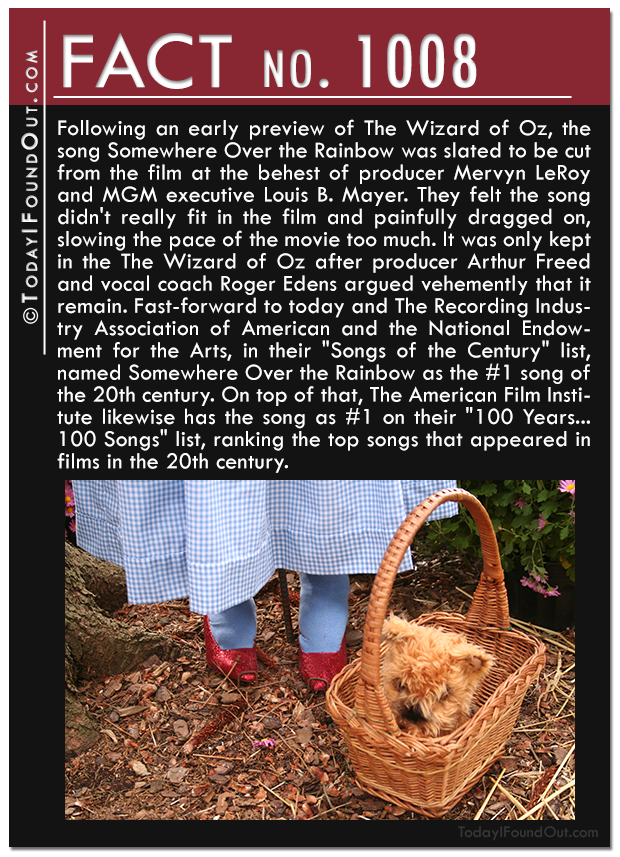 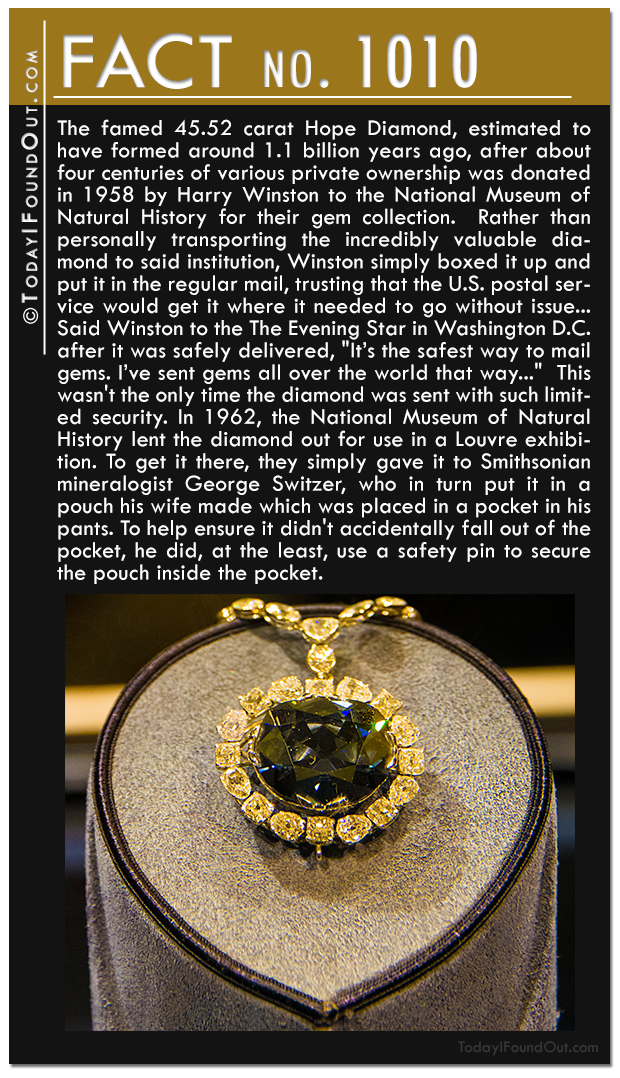 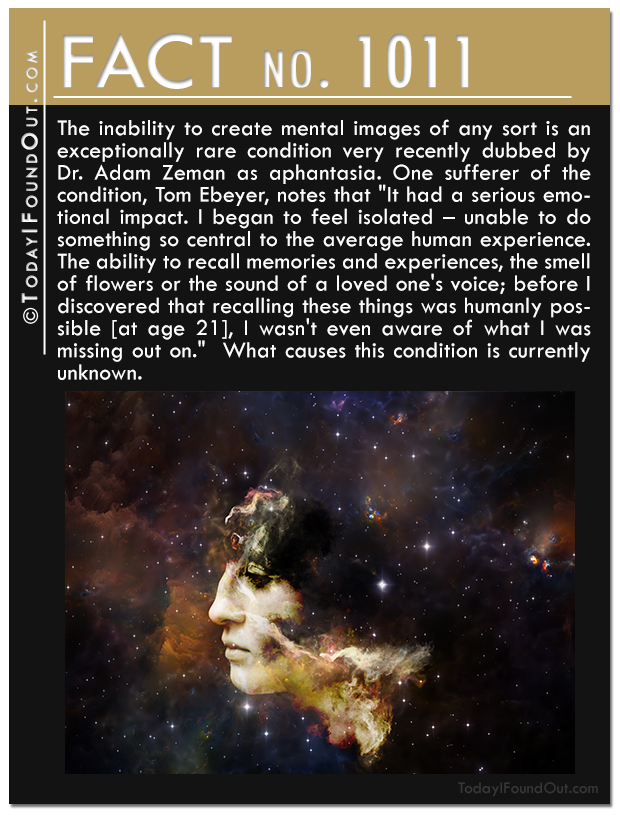 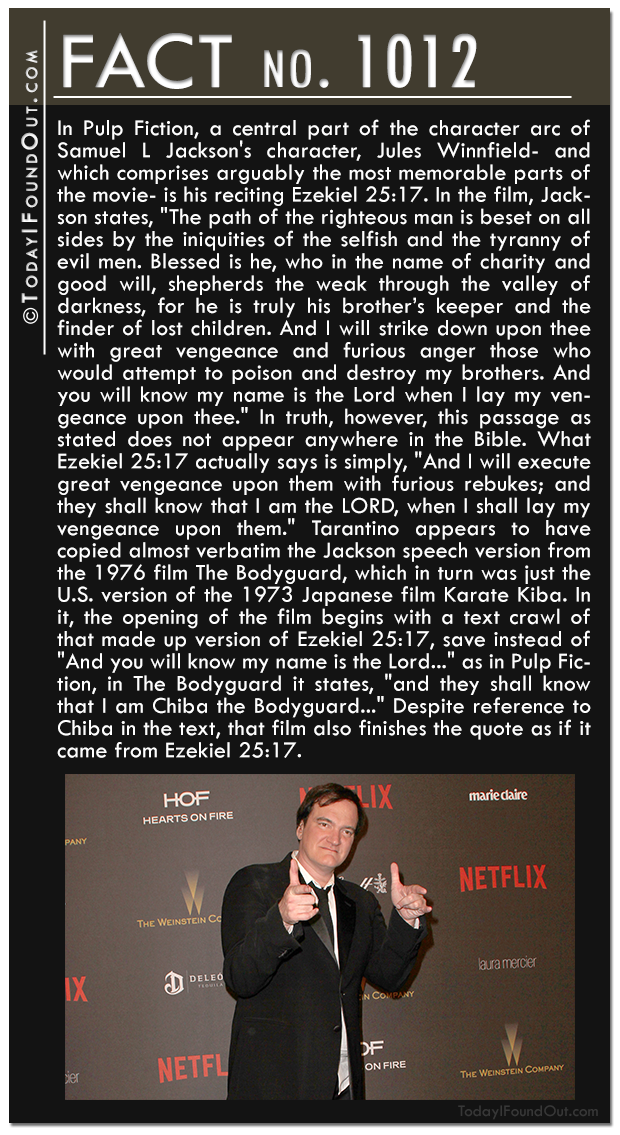 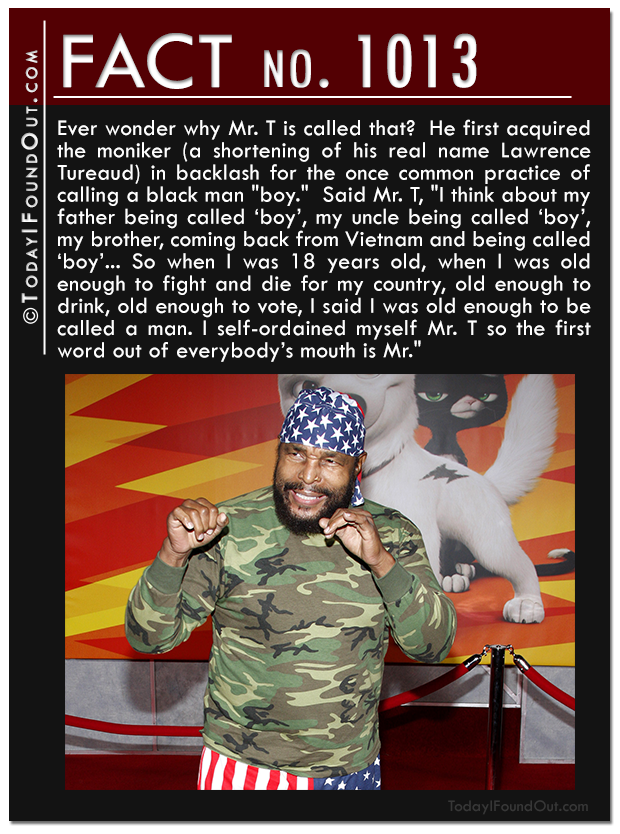 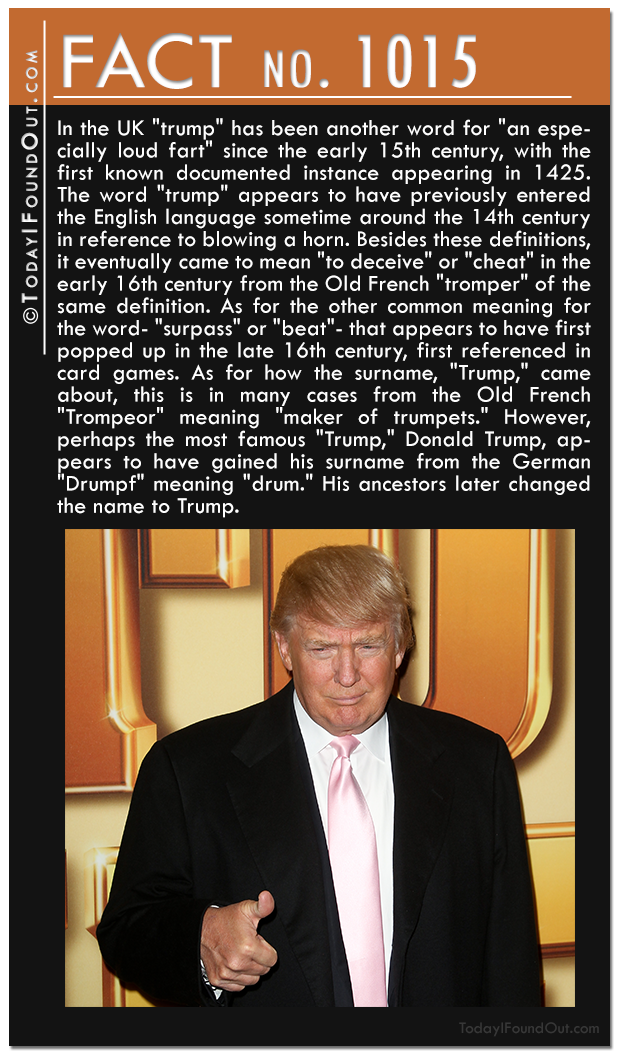 1006) While Amanda McBroom is probably best known for her role as Judge Advocate General Captain Philippa Louvois in what is generally considered one of the best Star Trek: The Next Generation episodes, The Measure of a Man, it might also surprise you to learn that she wrote the song, The Rose, first made famous by Bette Midler in the film of the same name.  According to McBroom, she wrote the song in under an hour in 1977, attempting to make something “Bob-Seger-like” in hopes of getting a record deal. She performed the song over the next couple years with little fanfare before it was tabbed to be used in the 1979 Midler film.

1007)  Like many aquatic invertebrates, flatworms are hermaphrodites, which means they have both male and female reproductive organs. For reproductive purposes, they determine who’s going to be the mother or father with a good old fashioned fight- a penis fight, to be exact, in an act scientists call “penis fencing”.  Yes, in many species of flatworm the creatures literally duke it out with their junk- sometimes for as much as an hour- trying to stab each other until one (or in some species both) succeed and ejaculate sperm through the skin of the other flatworm. The ‘loser’ flatworm takes on the female role and later gives birth. The winner male in many species will sometimes then go on to fence with other flatworms until it eventually loses and becomes impregnated.

1008) Following an early preview of The Wizard of Oz, the song Somewhere Over the Rainbow was slated to be cut from the film at the behest of producer Mervyn LeRoy and MGM executive Louis B. Mayer. They felt the song didn’t really fit in the film and painfully dragged on, slowing the pace of the movie too much. It was only kept in the The Wizard of Oz after producer Arthur Freed and vocal coach Roger Edens argued vehemently that it remain. Fast-forward to today and The Recording Industry Association of American and the National Endowment for the Arts, in their “Songs of the Century” list, named Somewhere Over the Rainbow as the #1 song of the 20th century. On top of that, The American Film Institute likewise has the song as #1 on their “100 Years… 100 Songs” list, ranking the top songs that appeared in films in the 20th century.

1009) While Robert Frost’s famed poem The Road Not Taken is commonly interpreted as being a poem about the benefits of taking the less trodden path, this actually isn’t what the poem is about at all if one reads it carefully. In fact, the protagonist of the poem explicitly admits that both paths he was choosing from were “worn… really about the same” and that he was only fooling himself in the present that one of the roads was less traveled, though he was certain in the future he’d successful fool himself in this, which he states in the famous final lines. The protagonist also explicitly regrets deeply not being able to take both paths to see where they both lead, consoling himself that he’ll come back another time to take the other, before once again admitting that he was just deluding himself and that he would never do so.  The “sigh” in the concluding lines is also often misinterpreted as a sigh of satisfaction, when in fact, given comments by Frost himself and who the poem was inspired by, it’s generally thought that the sigh was one of regret that the protagonist hadn’t taken the other path.

As for who the poem was written about, that was Frosts’ close friend Edward Thomas, who Frost noted was “a person who, whichever road he went, would be sorry he didn’t go the other.”  Thomas himself misinterpreted the poem the first time he read it as many do today, resulting in Frost explaining the actual meaning of his “private jest” when one reads the poem more carefully. This, in turn, resulted in Thomas writing back, “I doubt if you can get anybody to see the fun of the thing without showing them and advising them which kind of laugh they are to turn on.” In other words, Thomas thought Frost should be more explicit in the poem, but Frost himself was noted as finding the common misinterpretation rather amusing and that even when he would read the poem to audiences “doing my best to make it obvious by my manner that I was fooling…” people still commonly missed the point. (For a much more detailed analyses of the poem, see our article on the subject on TodayIFoundOut.com)

1010) The famed 45.52 carat Hope Diamond, estimated to have formed around 1.1 billion years ago, after about four centuries of various private ownership was donated in 1958 by Harry Winston to the National Museum of Natural History for their gem collection.  Rather than personally transporting the incredibly valuable diamond to said institution, Winston simply boxed it up and put it in the regular mail, trusting that the U.S. postal service would get it where it needed to go without issue…  Said Winston to the The Evening Star in Washington D.C. after it was safely delivered, “It’s the safest way to mail gems. I’ve sent gems all over the world that way…”  This wasn’t the only time the diamond was sent with such limited security. In 1962, the National Museum of Natural History lent the diamond out for use in a Louvre exhibition. To get it there, they simply gave it to Smithsonian mineralogist George Switzer, who in turn put it in a pouch his wife made which was placed in a pocket in his pants. To help ensure it didn’t accidentally fall out of the pocket, he did, at the least, use a safety pin to secure the pouch inside the pocket.

1011) The inability to create mental images of any sort is an exceptionally rare condition very recently dubbed by Dr. Adam Zeman as aphantasia. One sufferer of the condition, Tom Ebeyer, notes that “It had a serious emotional impact. I began to feel isolated – unable to do something so central to the average human experience. The ability to recall memories and experiences, the smell of flowers or the sound of a loved one’s voice; before I discovered that recalling these things was humanly possible [at age 21], I wasn’t even aware of what I was missing out on.”  What causes this condition is currently unknown.

1012) In Pulp Fiction, a central part of the character arc of Samuel L Jackson’s character, Jules Winnfield- and which comprises arguably the most memorable parts of the movie- is his reciting Ezekiel 25:17. In the film, Jackson states, “The path of the righteous man is beset on all sides by the iniquities of the selfish and the tyranny of evil men. Blessed is he, who in the name of charity and good will, shepherds the weak through the valley of darkness, for he is truly his brother’s keeper and the finder of lost children. And I will strike down upon thee with great vengeance and furious anger those who would attempt to poison and destroy my brothers. And you will know my name is the Lord when I lay my vengeance upon thee.” In truth, however, this passage as stated does not appear anywhere in the Bible. What Ezekiel 25:17 actually says is simply, “And I will execute great vengeance upon them with furious rebukes; and they shall know that I am the LORD, when I shall lay my vengeance upon them.” Tarantino appears to have copied almost verbatim the Jackson speech version from the 1976 film The Bodyguard, which in turn was just the U.S. version of the 1973 Japanese film Karate Kiba. In it, the opening of the film begins with a text crawl of that made up version of Ezekiel 25:17, save instead of “And you will know my name is the Lord…” as in Pulp Fiction, in The Bodyguard it states, “and they shall know that I am Chiba the Bodyguard…” Despite reference to Chiba in the text, that film also finishes the quote as if it came from Ezekiel 25:17.

1014) Mr. T’s trademark wearing of various jewelry such as gold chains and the like came about while working as a bouncer, from his practice of wearing various items people would accidentally leave behind after fights in the night club.  If they wanted the item back after he threw them out, they simply had to come up to him at the door and ask that he take it off and give it back… He’s since refined this from random jewelry to very specific jewelry representing very specific things: “I wear seven earrings. I wear three in my right ear. The three is symbolic of the father, the son, and the holy ghost, the three wise men, the three Hebrew boys–Shadrach, Meshach, and Abed’nego–the three parts of the day, morning, noon, and night, the three days Jesus was in the tomb, Friday, Saturday, and Sunday, the three graces, Faith, Hope, and Love, the three motions, slow motion, moderate motion and fast motion, water comes in three forms, you let it stay like it is, it’s a liquid, if you slow the molecules down, it becomes ice. Speed the molecules up, becomes steam…. Left ear, I wear four earrings. The four is symbolic of the four seasons, spring, winter, summer and fall, the four directions, north, east, south and west, the four gospel writers, Matthew, Mark, Luke and John…. Then you put the three and four together, it’s seven. It’s seven times that Joshua marched around the walls of Jericho, Samson had seven locks of hair, like seven braids, like seven dreadlocks, there’s seven notes in a musical bar, there’s seven colors in the rainbow, God made heaven and earth in six days, he rested on the seventh, I am the seventh son… The reason why I wear gold: I wear gold for three reasons. One, when Jesus was born, three wise men came from the east, one brought frankincense, one brought myrrh, the other one brought gold. The second reason I wear gold is I can afford it. The third reason I wear it, it’s symbolic of my African heritage. When my ancestors came from Africa, they were shackled by our neck, our wrists and our ankles in steel chains. I’ve turned those steel chains into gold to symbolize the fact that I’m still a slave, only my price tag is higher.”

As for his iconic hair style, this was the result of something Mr. T read in National Geographic, about Mandinke warriors in Mali, Africa that supposedly wore their hair that way.

1015) In the UK “trump” has been another word for “an especially loud fart” since the early 15th century, with the first known documented instance appearing in 1425. The word “trump” appears to have previously entered the English language sometime around the 14th century in reference to blowing a horn. Besides these definitions, it eventually came to mean “to deceive” or “cheat” in the early 16th century from the Old French “tromper” of the same definition. As for the other common meaning for the word- “surpass” or “beat”- that appears to have first popped up in the late 16th century, first referenced in card games. As for how the surname, “Trump,” came about, this is in many cases from the Old French “Trompeor” meaning “maker of trumpets.” However, perhaps the most famous “Trump,” Donald Trump, appears to have gained his surname from the German “Drumpf” meaning “drum.” His ancestors later changed the name to Trump.