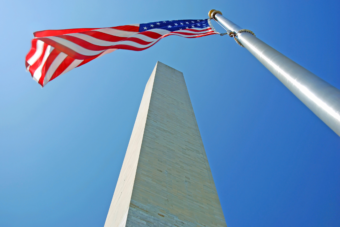 Fifty white stars on a field of blue (one for each state) and 13 horizontal stripes, alternating red (7) and white (6) for the original 13 colonies, the U.S. flag is a revered symbol by many of the nation. And in recognition of the honored place Old Glory holds, in 1947, Congress passed a series of laws, specifically proscribing how the flag should look, be cared for and respected.

Found near the beginning of the codified version of the statutory laws of the United States (called the U.S. Code) in Title 4 (out of 54), the provisions relating to the flag are numerous and detailed. For example, the Code has specific rules for when civilians can display the flag, and these allow that it may be set out for 24 hours at a time, should be raised quickly and lowered “ceremoniously,” and unless an all-weather flag, should not be displayed during bad weather. 4 U.S.C. § 6.

Moreover, the Code instructs that, in addition to the dates of admission of the States, State holidays and those days “proclaimed by the President,” the Flag “should be displayed” on the following days:

In addition, two types of institutions, schools and polling places, should always display a flag when operating. Id.

There are also rules about how to display the Flag in a procession (like a parade), and it should either be to the right or in front of a line of flags, and should never be placed on a parade float except on a staff. 4 U.S.C. § 7. It also should not be draped over the hood, sides, or back of a car, but may be “fixed firmly to the chassis or clamped to the right fender.” Id.

Except for church services for Navy personnel when a church pennant may be hung above it, the Flag should never be displayed below another one, other than at the United Nations headquarters. Id.

The Code also explicitly commands respect for Old Glory, directing that the Union should only be displayed on the bottom “as a signal of dire distress,” the flag should never touch “the ground, the floor, water, or merchandise,” it “should never be used as wearing apparel,” or for a costume. (4 U.S.C. § 8.)  In fact, only patriotic organizations, policemen, firemen, and military personnel are allowed to wear the flag as part of their uniform or costume, and under no circumstances is the flag to be made part of an athletic uniform, despite that even some major athletic organizations do this very thing on occasion. (4 U.S.C. § 8.)

Moreover, it is noted in this same section “The flag should never have placed upon it, nor on any part of it, nor attached to it any mark, insignia, letter, word, figure, design, picture, or drawing of any nature” and that “The flag should never be used for advertising purposes in any manner whatsoever. It should not be embroidered on such articles as cushions or handkerchiefs and the like, printed or otherwise impressed on paper napkins or boxes or anything that is designed for temporary use and discard. Advertising signs should not be fastened to a staff or halyard from which the flag is flown.”

On that note, while the Code, which explicitly notes, “No disrespect should be shown to the flag of the United States of America” may prohibit such things as desecration of the Flag, its use in advertising, or on temporary merchandise like napkins (flag napkins and paper plates commonly found at any 4th of July party). etc., for various reasons, those sections are not enforced. For example, the Code’s § 3 was specifically identified in a 1925 Attorney General Opinion to apply only to activities within the District of Columbia. 34 Op.Atty.Gen. 483.

Despite this, the Flag Code does state in the most verbose way possible,

However, even if § 3, like § 8, did apply throughout the nation, it’s doubtful either law could ever really be enforced, as activities related to the Flag have been interpreted by the United States Supreme Court as being protected “speech” under the First Amendment, and, therefore, not subject to punishment by the government. See Texas v. Johnson and United States v. Eichman (holding flag burning as Constitutionally-protected speech).

And speaking of flag burning, according to the Code, this is actually the preferred way to destroy a flag that is “in such a condition that it is no longer a fitting emblem for display.” However, a requirement of this flag cremation is to do it “in a dignified way.”