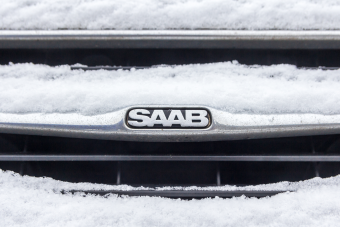 Auto companies are a lot like automobiles. Some seem to run forever; others never ran very well in the first place. Here’s a look at a stylish carmaker that was beloved by its fans…but still ended up in a ditch.

In the years leading up to World War II, the Swedish government founded a company called Svenska Aeroplan AB (Swedish Aeroplane Company, Ltd.), or SAAB, to build fighter planes to defend the country’s neutrality if war did come. After the war, the company went looking for new products to manufacture to keep its factories humming. It considered building prefabricated housing, washing machines, and boats, but ultimately decided on cars.

Saab assigned 16 designers, aeronautical engineers, and craftspeople to the car project. None had ever designed an automobile before (and only two had driver’s licenses), so to get an idea of how cars were built, they bought several from a junkyard, including a Volkswagen Beetle, an Opel Kadett, and an Audi DKW, and took them apart. They used what they learned to build the Ursaab, or “first Saab,” the prototype that would serve as the basis for the company’s production models.

The Ursaab differed in many ways from most cars of the day:

The Ursaab may have been designed a little too much like an airplane wing, because when the finished prototype was taken out for road testing, the rear end had a tendency to lift off the ground at high speeds. The engineers fixed that problem by making the Saab 92—the company’s first production vehicle—look more like a conventional European compact car and less like an airplane. Even so, when it went on sale in late 1949, it was still the most aerodynamic car on the market.

The Saab 92 was zippy and fun to drive. Even though it only had a tiny 25-horsepower engine—smaller than some riding lawnmowers—the car’s light weight and streamlined shape gave it a top speed of 65 miles per hour and quicker acceleration than many larger cars with more powerful engines. The engine didn’t use much gas and it was cheap and easy to repair, and the car’s front-wheel drive gave it excellent traction in snowy Swedish winters. The 92 quickly developed a following, not just among ordinary car buyers, but also among racecar drivers, who entered them in road rallies and began racking up one victory after another.

IF IT AIN’T BROKE… 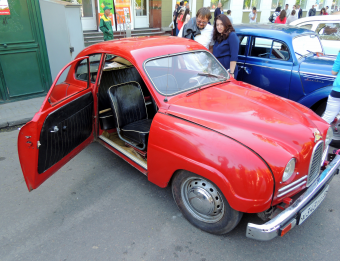 A number of changes over the years were safety improvements. The 1958 Saab GT 750 was the world’s first car with seat belts included as standard equipment. In 1968 the Saab ignition switch was moved from the steering column to between the driver and passenger seats, to protect the driver’s knee from smashing into it in a car accident. Saabs made after 1971 were the first cars to have steel beams in their doors to protect against side-impact collisions. 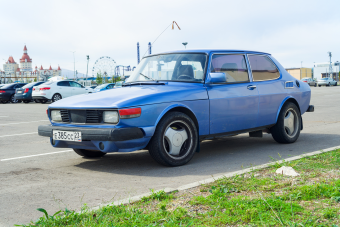 In spite of these and other changes, Saabs remained remarkably consistent over the years. The front-engine, front-wheel-drive configuration worked well, so the company stuck with it. And though the odd shape of the Saab evolved over time from its aerodynamic origins to the angular shape of the 900 (which looked to Uncle John like a duck bill), it never stopped being odd. Whether you liked the way a Saab looked or not, when you saw one there was no doubt that it was a Saab.

The unique nature of Saabs, combined with the company’s emphasis on solid engineering, strong performance, and uncompromising safety, helped the cars attain cult status with nonconformists looking for an alternative to the cars everyone else drove. Saab enthusiasts, or “Snaabs,” as they came to be known, were well-educated: a higher percentage of Saab owners had PhDs than did owners of any other make of car. They had a strong psychological attachment to their Saabs, and just as strong a dislike of other makes of cars—especially BMWs, for some reason—not to mention contempt for the people who drove them.

And yet as popular as Saabs were with people who liked Saabs, they remained a niche product that appealed to comparatively small numbers of car buyers. Saab had trouble growing its business beyond its three main markets of Sweden, Great Britain, and the United States. Though it offered multiple variants of the same basic models over the years, including two- and four-door versions, hatchbacks, station wagons, convertibles and, beginning in 1978, models with turbocharged engines, the company struggled to grow beyond one or (from 1968–1980) two compact car platforms. It wasn’t until 1984 that the company introduced a full-sized sedan, the Saab 9000, to its lineup, and only then after sharing the development costs with Fiat. The Italian automaker sold its 9000s as Fiat Cromas, Alfa Romeo 164s, and Lancia Themas.

Saab lost money most years, and some years it lost a lot of it. In 1989 Saab’s aerospace parent company threw in the towel and spun the carmaker off into an independent company, Saab Automobile AB. The new company wasn’t independent for long. Half of it was snapped up by General Motors; then in 2000, GM bought the other half, turning Saab into one of its wholly owned subsidiaries, not much different from Oldsmobile or Buick.

The acquisition offered the promise of Saab finally getting the resources it needed to expand its lineup and bring its aging models up to date. But for that to work, GM would have to let Saab be Saab. It didn’t—instead, it replaced Saab’s iconic styling with “halfhearted, dumbed-down…homogenized blobs,” as Car and Driver magazine put it, alienating Snaabs without attracting new buyers. In 1994 GM ditched Saab’s best-selling car ever, the beloved Saab 900, in favor of a dull replacement called the Saab 900 NG (“New Generation”) that was built on the same platform as GM’s Opel Vectra. Snaabs refused to buy them—the whole point of buying a Saab, after all, was that it wasn’t like any other car.

By 2005 U.S. sales had fallen so precipitously that GM began “rebadging” Subarus, Chevys, and even Cadillacs as Saabs to give struggling Saab dealerships more cars to sell, so that they wouldn’t abandon the brand altogether. No one was fooled: the fake Saabs sold worse than the real Saabs. And because GM itself was in a tailspin, it couldn’t spare any more money to help turn Saab around. By the time GM filed for bankruptcy in 2009, annual sales of Saabs had plummeted from 133,000 cars in 2000 to fewer than 40,000.

In 2009 Saab went into “administration,” the Swedish equivalent of bankruptcy, while GM shopped it around to BMW, Fiat, Renault, and other major automakers. None of the big companies were interested, so in February 2010, GM sold Saab to tiny Spyker Cars, a Dutch maker of high-performance sports cars whose sales averaged fewer than 30 cars a year.

Spyker didn’t have the resources to keep Saab afloat either; it filed for bankruptcy in December 2011. The following June a Hong Kong-backed company called National Electric Vehicle Sweden (Nevs) bought Saab’s assets in bankruptcy court. In late 2013, it began building ten gasoline-powered Saabs a week at the old Saab factory in Trollhättan, Sweden, with plans to introduce electric vehicles in the future. Because Saab dealerships have gone out of business, the cars are sold on the company’s website.

As of 2014, Nevs was focusing on sales to Sweden and China. It hopes to expand into other markets “over time,” but don’t hold your breath: “It’s hard to imagine how anyone could make a go of Saab as a stand-alone business,” auto industry analyst Garel Rhys told The Guardian in 2010. “There have only been a few years that the company hasn’t made a loss since it first started making cars.”