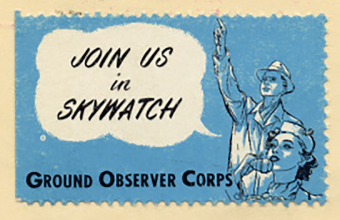 In September 1949, a U.S. Air Force reconnaissance plane flying over the North Pacific from Japan to Alaska detected levels of radioactivity in the atmosphere at least 20 times above normal. Other planes in the Pacific reported similar observations in the days that followed; elevated radiation levels were soon being detected over the British Isles half a world away. It quickly became clear that there could be only one explanation for the spreading cloud of radioactivity: the Soviet Union had secretly detonated its first atomic bomb.

The United States had known since the end of World War II that the Soviets would try to build their own nuclear weapon, but the best estimates were that it would take them eight to ten years to do it. They had managed it in less than four.

The Soviet bomb was estimated to be as powerful as the one dropped on Nagasaki in the closing days of World War II. That bomb had killed more than 70,000 people. Making matters worse, the Soviets were also building long-range bombers that could reach the United States. America’s entry into World War II had been precipitated by a surprise attack on Pearl Harbor. Now, as the Cold War heated up, it seemed possible that the next war might begin with an atomic sneak attack by the Russians. If their target was a major American city like Washington, D.C., or New York, the casualties could be in the millions.

The United States had a limited ability to detect incoming bombers using radar, the technology that Britain had used to defend itself from Nazi fighter planes and bombers during World War II. But there were huge gaps in the radar coverage of the United States, and even where there were no gaps, the radar systems of the late 1940s did not have the ability to detect low-flying airplanes.

The Russians likely knew this, so if they did attack, their bombers would fly too low to be detected by radar. Some other means of spotting these aircraft had to be put into place until the radar system improved. American military planners dusted off an idea that had been used during World War II: recruiting civilian volunteers to watch for bombers using binoculars and the naked eye.

During the war, more than 1.5 million civilians had been posted in 14,000 observation posts on the East and West Coasts to keep watch for incoming German or Japanese aircraft. This “Ground Observer Corps,” as it was known, was wound down toward the end of the war. But now that the threat of enemy air attack was rising again, the decision was made to bring it back into operation.

THE EYES HAVE IT

By early 1952, the reconstituted Ground Observer Corps had more than 200,000 civilian volunteers keeping watch in 8,000 observation posts, not just on the East and West Coasts as in World War II, but also along the northern border with Canada. Not out of fear that the Canadians might invade, but because a likely air route from the Soviet Union to the United States was over the polar ice cap and down through Canada. The system operated much the same way as it had during the war:

FUN FOR THE WHOLE FAMILY

Volunteers for the Ground Observer Corps were from all walks of life. The only requirements were that they have good eyesight, good hearing, good judgment, and the ability to speak clearly when phoning in aircraft sightings. The youngest volunteers were under 10 years old and the oldest were in their 80s. Some high schools had spotters clubs that were popular with kids who wanted an excuse to get out of class.

Volunteers received training on how to identify aircraft and were given guidebooks with photographs of friendly and enemy aircraft. They were also issued transparent templates that they could hold up to gauge how far away airplanes were. If a plane was small enough to fit inside the hole marked “5 Miles,” it was about five miles away. If it was too big for that hole but fit inside the larger “1 Mile” hole, then it was about a mile away.

Although the Ground Observer Corps remained active until the end of the decade, it never managed to plug the gaps in America’s radar coverage anywhere near as effectively as the military had hoped. Relying on volunteers was a big part of the problem: though the idea of watching for enemy bombers may have seemed exciting at first, there was little unusual air activity to report, and the job quickly became boring. Many observation posts were unheated in winter and lacked air-conditioning in the summer, which made it even harder to find volunteers to fill the two-hour shifts. And though the posts were supposed to be manned around the clock, few people were willing to volunteer in the middle of the night. Result: many posts went unoccupied and unstaffed for days on end.

Though the military had hoped to recruit more than a million volunteers, their numbers never grew much above 200,000, and by the end of 1953 the number of active volunteers had dwindled to about 100,000. Even after the Soviet Union successfully tested a thermonuclear bomb in 1955, a U.S. Air Force report found that “the vast majority of Americans would rather play bridge, watch television, or go to bed” than spend their free time watching for enemy planes in the Ground Observer Corps.

Though the military apparently never considered actually paying people to watch for enemy aircraft, it was willing to spend vast sums of money improving America’s radar defenses. It spent much of the 1950s building a network of 63 radar stations stretching from Alaska across the far north of Canada to Greenland and Iceland. This system, called the Distant Early Warning Line, or DEW Line, cost more than $600 million in 1957, the equivalent of more than $5.1 billion today. Another $2 billion ($26 billion today) was spent on a computer system to link the radar stations together. When the system went online beginning in 1957, the Ground Observer Corps instantly became obsolete, and was deactivated in January 1959. Today about all that remains of the corps are the badges, guidebooks, and other paraphernalia that pops up on eBay—that and the memories of the people who volunteered their time. “It was fun doing it,” remembered Bob Hazel, who was a member of his high school’s spotters club in Chesapeake City, Maryland. “You felt as if you were important and it was an important job,” he told an interviewer in 2015. “And, of course, I guess it was.”