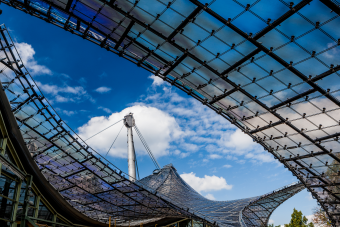 Before 1972 no U.S. men’s basketball team had ever lost in Olympic play. Starting in 1936 (the year basketball became an Olympic sport), U.S. men’s teams won 63 consecutive games—and seven straight gold medals. But just after midnight on September 10, 1972, in Munich, Germany, that golden winning streak came to a screeching end, courtesy of the Soviet Union. The final three seconds of that game may be the most controversial Olympic finish of all time, because officials allowed those three historic seconds to be played not once, not twice, but three times.

Although the U.S. was favored to win, the Soviet team was not only good, it was seasoned, having played hundreds of games together. The American team, on the other hand, was basically a college all-star team; most of its members had played together only a few times before the Olympics. According to U.S. assistant coach John Bach, the team’s experience amounted to 12 exhibition games plus the Olympic trials. To top it off, the 1972 squad was the youngest ever to represent the United States in Olympic competition. They had two things going for them—they were tall (average height: 6’7″) and they were talented (an amazing 10 members of the team went on to become first-round NBA draft choices.) “These were the two strongest countries in the world fighting for supremacy, and basketball was ours,” said U.S. guard Doug Collins, now head coach of the Philadelphia 76ers.

Surprisingly—at least to those who believed the U.S. couldn’t lose at men’s basketball—the Soviets built a 10-point lead in the second half. They kept that lead for several minutes before U.S. guard Kevin Joyce led a furious comeback. Pressing and hustling, the Americans whittled the lead down to a single point at 49–48 with 38 seconds left. But the Soviets had the ball. Intent on running out the clock, they passed back and forth, keeping the ball away from the Americans.

With just 10 seconds left, Joyce deflected a pass from Aleksandr Belov, and teammate Doug Collins scooped it up. Collins drove toward the basket to make the winning shot. “As I picked up my dribble,” Collins recalled 40 years later, “I saw the guy from Russia. He was not going to be able to get an offensive foul—he couldn’t get there. So basically he was just going to cut my legs out from underneath me.” Soviet player Zurab Sakandelidze fouled Collins so hard that he fell against the basket stanchion, which he said “knocked him woozy.” An intentional foul was called against Sakandelidze. With three seconds on the clock, Collins gathered his wits and sank two free throws, giving the U.S. a one-point lead. The score: 50–49. It looked like another Olympic championship would be theirs.

After the free throws, only one second remained on the clock. A single second wouldn’t give the Soviets enough time to in-bound the ball and drive to the hoop. Game over? No. A referee blew his whistle and stopped the game. He’d noticed a Soviet assistant coach gesturing frantically that they had signaled for a time-out between Collins’s two free throws and been ignored.

Lead referee Renato Righetto allowed the time-out. When play resumed, according to Righetto, the clock should have been reset to show one second remaining. It wasn’t. William Jones, secretary general of the International Basketball Federation (FIBA), came out of the stands and ordered the time keepers to turn the clock back three seconds—the time from the whistle of the foul against the Soviet Union to when the U.S. team scored two free throws would be played again. “Jones overruled the referee and the official scorer,” said U.S. team captain Kenny Davis. “He had no power at all to do that.”

William Jones may not have had the authority to overrule the official scorer, but that’s exactly what he did. The clock started ticking off those three seconds again. The Soviets in-bounded the ball and went for a long pass. The pass failed, and the buzzer sounded to end the game. The Americans celebrated wildly.

Then, suddenly, officials stopped the celebration, cleared the floor, and ordered three seconds showing on the clock again. Apparently the time keepers had still been fiddling around with the clock trying to reset it when play resumed. U.S. players stood in shock. “We couldn’t believe that they were giving them all these chances,” said forward Mike Bantom. “It was like they were going to let them do it until they got it right.”

When play continued, Ivan Edeshko threw a full-court pass to Aleksandr Belov, the player who’d made the bad pass moments earlier. Belov caught it and laid the ball into the hoop just as the clock expired again. Final score at the horn: 51–50, in favor of the Soviet team. Belov raced back to his teammates with his arms held high, a newly minted hero, while the U.S. men’s team lost an Olympic basketball game…for the first time ever.

“It was sort of like being on top of the Sears Tower in Chicago celebrating and then being thrown off and falling 100 floors to the ground,” said Doug Collins.

AND THE WINNER IS…THE COLD WAR!

Referee Righetto would not sign the official scorebook until the word PROTEST had been stamped on it, and the U.S. team filed an immediate formal protest with the International Basketball Federation. The next day, a five-member FIBA Jury of Appeals met to decide the winner. On the panel: three jurors from Communist countries Cuba, Poland, and Hungary, one from Puerto Rico, and one from Italy.

According to Sports Illustrated writer Gary Smith, “Everything progressed according to strictly Cold War politics. There were three Communist Bloc judges. It was a three to two vote. America loses. The Soviet Union wins the gold medal, and at that point the American players are facing a stark reality. Do they accept the silver medal?”

The U.S. team voted to reject the silver. “We do not feel like accepting the silver medal because we feel we are worth the gold,” said Bill Summers, chairman of the U.S. Olympic Basketball Committee and manager of the U.S. team.

Forty years later, team members still won’t accept second place. Their silver medals remain in a vault in Lausanne, Switzerland, and none of the players wants them. In fact, team captain Kenny Davis said, “I have placed it in my will that my wife and my children can never, ever receive that medal from the ’72 Olympic Games. I don’t want it. I don’t deserve it. And I want nothing to do with it.” U.S. forward Mike Bantom agreed: “If we had gotten beat, I would be proud to display my silver medal. But, we didn’t get beat, we got cheated.”

As for the Soviets, Edeshko—the player who threw the game-winning pass for his team—voiced the opposite viewpoint: “It was the Cold War. Americans, out of their own natural pride and love of country, didn’t want to lose and admit loss. They didn’t want to lose in anything, especially basketball.”

The last word goes to lead referee Renato Righetto. In a signed affidavit to the International Olympic Committee, he wrote, “I consider what happened as completely illegal and an infraction to the rules of a Basketball game.”

Every Olympics has its share of stories: goals reached, hopes dashed, medals won and lost. But the 1972 Munich games went far beyond athletics. What happened there became part of world history. Here are a few significant facts: