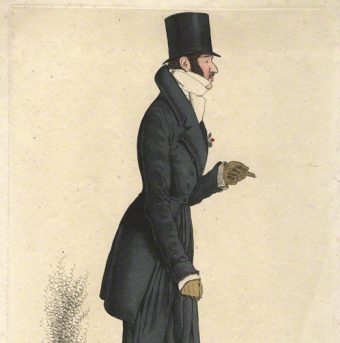 History is filled with stories of eccentric people whose lives were littered with astonishing and sometimes improbable stories. Edward Hughes Ball Hughes (that was his real name) was one such individual- a man who spent money so erratically that he came to be known by the rather fitting moniker of Golden Ball Hughes or more simple, The Golden Ball.

Born in 1798 to a relatively well off family, Edward Hughes Ball enjoyed the finest education money could provide, studying at both Eton and Trinity College in Cambridge. He also enjoyed a brief stint in the army shortly after leaving college, serving with the 7th Queen’s Own Hussars right up until 1819 when he heard the news that a distant uncle on his mother’s side had sadly passed away.

As it turns out, this uncle had left the young man his entire estate, comprising of two homes in London, an estate in Essex, and approximately £600,000, or roughly £50 million today ($66 million). The finances from this inheritance were put into a trust to be doled out to Edward to the tune of around £40,000 per year (the modern equivalent of about three or four million pounds). Around this time, Edward legally changed his name from Edward Ball Hughes to Edward Hughes Ball Hughes as a nod to the uncle who’d left him his hard earned fortune, one Admiral Sir Edward Hughes.

Soon after inheriting the money his uncle had painstakingly accumulated over his lifetime, Edward Hughes Ball Hughes set about transforming himself into the epitome of an English dandy by spending his inheritance as fast and as frivolously as he could. Known for being extraordinarily handsome, with an enormous fortune now at his disposal, Hughes easily assimilated himself into the upper classes of society, peacocking his way onto the radar of the rich and powerful of the nation at every opportunity possible. Found at virtually any party of note near London, Hughes, dressed to the nines, would roll up to balls and galas in a custom made chocolate coloured coach pulled by matching horses, invariably with a beautiful young woman on each arm.

Hughes’ flamboyant dress sense and overwhelmingly affable personality saw him become popular with the self-styled aristocratic dandies of the day, with his peers affectionately referring to him as “Golden Ball Hughes” in reference to his fabulous wealth.

Despite his popularity, many preyed on Hughes’ seemingly obliviousness to the value of money and his love of gambling to fleece the young fop at every turn. He was even known to be willing to bet many thousands of pounds on things as innocent as a single flip of a coin.

Hughes was such a naive gambler, and so well liked, that in 1824 someone took it upon him or herself to warn the hapless rake about ne’er do wells who were trying to take his money, going as far as printing a pamphlet and sending it to him, which stated, among other things:

Another observation I must make – you were chosen a member of White’s Club-house on the day of your marriage. Listen, Sir, a WARNING VOICE; there are THREE members of THAT Club who have ALREADY marked you as a victim to combinations you cannot detect, and to skill you are unable to oppose. Ruin will follow your steps THERE; you cannot escape. If you play in private, or at subscription houses you devote yourself to inevitable destruction, and your whole family to beggary. In these slaughter houses, carcass butchers of rank and title will knock down your whole fortune in one night…

The day after the pamphlet arrived, Hughes went to that same gambling club and, indeed, lost a relatively large percentage of his fortune in one night, a sum of close to £45,000 (about £4 million today). Thanks to his massive and frequent losses, Hughes’ was, at least according to one contemporary’s seemingly ironic account, “perhaps the greatest gambler of his day”. 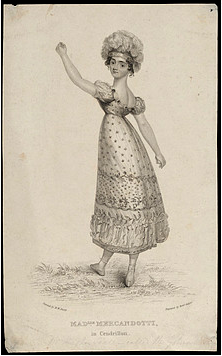 Shortly before this gambling debacle, in 1823, the 25 year old Hughes became infatuated with a 16 year old Spanish dancer called Maria Mercandotti. According to a contemporary article in The London Gazette,

Mercandotti, who had been gaining ground till she was at the height of public favour, on the first night of this ballet (the 8th of March) took the part of the king’s page in this performance, and looked and danced it admirably. Among the number of hearts on whom the bewitching eyes of the fair Spaniard had made an impression, was that of a gentleman well known as a man of wealth and fashion, Mr. Hughes Ball. This worshiper, like many others, had long and assiduously devoted his attentions to Mercandotti; but she was one of those rare examples that now and then occur to ornament the female biography of the stage, who, in a situation of all others the most trying to the best virtues of woman, preserve unsullied the integrity of their reputation.

Nevertheless, a few months later, with a packed house set to see the young starlet perform, she mysteriously didn’t show up, forcing the manager to tell the audience the show was canceled, ostensibly because Mercandotti was sick. However, in The London Gazette report, it was later noted, “that Mercandotti had a more agreeable cause of absence than ill health, and that she accepted the hand offered to her, at length, by Mr. Ball.”

When this fact emerged, noted English author William Harrison Ainsworth reportedly quipped: “The damsel is gone, and no wonder at all that, bred to the dance, she has gone to the Ball.”

Less than a year after marrying Mercandotti, Hughes purchased a 3,233 acre property known as the Oatlands Estate from the Duke of York where he and his new wife enjoyed the finer things in life like hunting and banqueting. Now, you probably think that we mean that the pair did those activities separately, but this is the Golden Ball we’re talking about. Hughes found a way to combine the two endeavours, hiring a veritable army of servants to follow him on his hunts carrying food, wine, spare guns and an entire wardrobe so he could change and hold a feast whenever he got bored with the hunt.

Legal difficulties meant that Hughes didn’t technically own Oatlands for three years after he’d moved in because of an issue of the ownership of a portion of the property from a previous sale in the late 18th century. In 1827, Hughes eventually got so annoyed that he demanded his lawyers simply ignore any objections to the sale using the age-old tactic of throwing money at his problem until it went away. By this point, the Duke of York had died and the sale was able to be completed without much more delay, to the tune of about £145,000 (about £14,000,000 today).

A year after the sale was completed, the Golden Ball ran out of gold and the property once again went up for sale. At the same time, Hughes fled the country in the wake of the revelation that he’d inadvertently gambled away nearly his entire fortune.

In one of the only sound financial moves of his life, Hughes wisely left control of his affairs to the infinitely more capable hands of his solicitors, Frere and Forster, who also took over management of the Oatlands Estate, even managing to turn a profit from it.  Nevertheless, Hughes’ debts were such that, despite the estate now being profitable, they were forced to divide it up and sell it off piece by piece to hold his creditors at bay.

At the same time they were securing Hughes’ financial future, his solicitors pleaded with him to live within his means, agreeing to send him an allowance equivalent in modern times to several thousand pounds per week. This paltry amount apparently wasn’t sufficient and Hughes racked up even more debt by gambling and spending exorbitant amounts on food, wine, and clothing while in France. To be fair, he was technically on vacation… No doubt seeing the writing on the wall, or perhaps not happy with the change in lifestyle Hughes’ diminishing funds afforded, Mercandotti divorced him in 1839 in search of better prospects.

Even after his financial situation was once again secured thanks to the work of Frere and Forster, Hughes never returned to England, though seemingly did learn his lesson, living a “quiet” life, by his standards at least, in Paris where he had three children with one Eliza Breugnot Momborne and later two children with Anne Henriette de Dauvet in the 1850s.

Hughes died in 1863 at the age of 65, leaving behind an estate worth a little over £30,000 or about £3 million today. While this isn’t exactly a figure to be sniffed at, it’s almost nothing compared to the enormous sum he once had as his inheritance, an estate that even with mediocre management should have seen him living lavishly, but still managing to increase his net worth.