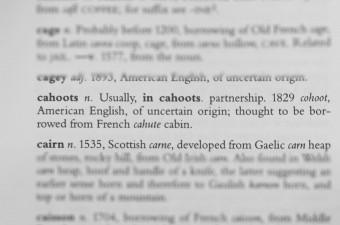 Meaning alternately companions, confederates, partners and/or conspirators, in cahoots is a phrase used to describe a situation where people are working together, often on an illegal, immoral, secret and/or unethical scheme. As for the word “cahoot” itself, it is defined as a “partnership, league.”

The precise origin of in cahoots is not known, although there are a few very compelling theories. The first was floated in 1848 by John Russell Bartlett (no apparent relation to the quotations guy) in his Dictionary of Americanisms:

CAHOOT. Probably from cohort, Spanish and French, defined in the old French and English Dictionary of Hollyband, 1593, as ‘a company, a band.’ It is used at the South and West to denote a company or union of men for a predatory excursion, and sometimes for partnership in business.

The earliest citation to in cahoot (and at this time, it was singular), was seen in 1827 in the Augusta (Georgia) Chronicle, in a fictional tale about a backwoods, would-be politician who was rallying support by decrying the government of then President, John Quincy Adams with:

I’ll just mention I hate the present ‘ministration as I do the polecat . . . . General government and the ‘ministration are going in cahoot to undermine us . . . .

Other early citations to the word also characterize it as a provincialism, and one to be avoided, such as in Samuel Kirkham’s English Grammar and Familiar Lectures (1829), where he notes that one should replace “in cahoot with me” to “in partnership with me.”

Not everyone has been convinced of the cohort origin, however, and in 1888, in the New English Dictionary (now known as the venerable Oxford English Dictionary), the editors found a different source word, the also French: cahute.

Cahute originally meant cabin or hut, and it had been adopted into Scottish dialectical English in the 16th century with a rather similar pronunciation as that of cahoot. Moreover, the meaning of Scottish cahute encompassed both the cabin on a ship as well as the people who would meet and plan together in it (later known as a cabinet). Accordingly, the editors of the OED became convinced that the origin of cahoot traced its lineage through Scotland, and its adoption of cahute, in the 1500s. The primary problem with this theory is that there is approximately a two and a half century gap between the last known instance of the Scottish term and the first of the similar American version.

The final plausible theory for in cahoots’ origins was suggested by Frederic G. Cassidy, founder of the Dictionary of American Regional English, in an article he wrote for American Speech in 1993. Cassidy thought that the word’s origins would be found by breaking the word into its component parts “ca” and “hoot.”

For the ca, importantly sometimes also co, Cassidy pointed to its use as a prefix in compound words to give the meaning of “together, mutually, in common.” Adding to this, Cassidy pointed to some of the Scottish variants of this prefix, which include car-, cur- and ker-, such as carfuffle and kersplash (which date to the early 16th century).

Next, Cassidy examined hoot’s use in older Scottish dialect, which not only at one time had the meaning of “business affairs or concerns,” but also was used as an exclamation of dissatisfaction. So, thinking of other words like ka-ching and ker-pow, Cassidy suggested that perhaps ca-hoot simply began as an exclamation applied to a group of people working together on something worthy of scorn or derision, such as a nefarious scheme.

Whatever the case, cahoots, instead of cahoot, first popped up around the mid-19th century, with the earliest known reference appearing in the 1862 Dictionary of American English: “Mc wished me to go in cahoots in a store.”