This Day in History: November 16th- Gein’s House of Horrors 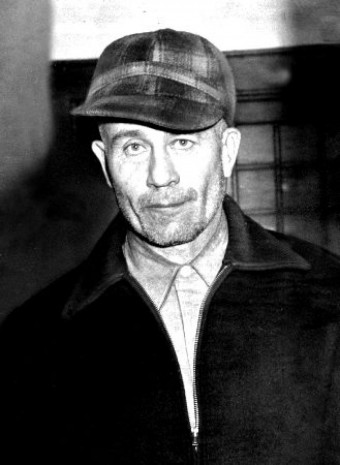 On November 16, 1957, notorious murderer Ed Gein killed hardware store employee Bernice Worden. Gein is said to have provided the blueprint for Buffalo Bill in The Silence of the Lambs, Leatherface in The Texas Chain Saw Massacre, and Norman Bates in Psycho. (See: The Secrecy of Psycho.) Since Ed reportedly liked to dress in the skin of his victims and pretend he was his over-bearing mother, one can see the connection.

Ed Gein lived in the small rural community of Plainfield, Wisconsin. His home was the 160-acre family farm where he resided with his tyrannical mother and his brother, Henry. The three lived an extremely isolated, beyond dysfunctional existence until Henry died in 1944 (apparently of asphyxiation due to a field fire that got out of hand, but it has since been speculated that Ed may have killed him as it is rumored that Henry wasn’t exactly shy about speaking negatively about their mother whom Ed adored). As for Ma’ Gein, she died a year later in 1945.

After his mother’s death, Ed, who by this time was a 39-year-old bachelor, boarded up his mother’s room, leaving it exactly as it was the day she died. He also closed off the home’s drawing room and five other rooms upstairs, living in a small room off the kitchen. Instead of farming, Ed began doing odd jobs around town to support himself.

With his now ample free time, Gein cultivated an unhealthy obsession with female anatomy and started studying up on the subject. After acquiring a solid knowledge base, Ed began sneaking into cemeteries at night and stealing corpses. He preferred recently deceased women around the same age as his mother at the time of her death.

When Bernice Worden’s went missing with a trail of blood leading to the store’s backdoor, her son reported to the police that Gein had been in the store the night before and said he’d be returning the next morning, looking to buy some antifreeze. He also had reportedly asked Worden out to go roller skating not long before. (Worden supposedly strongly resembled Gein’s mother.)  When the last receipt filled out by Worden turned out to be for a gallon of antifreeze, Gein became the prime suspect in her disappearance.

When the police went out to check out Gein’s property, they found Worden’s decapitated body hung upside-down and dressed out like a deer with a crossbar at her ankles. It was later revealed she’d been shot in the head (at the store) before the mutilations had been performed.

Fortunately for all but two of Gein’s known victims (tavern owner Mary Hogan in 1954 and Bernice Worden on November 16, 1957), they were already dead when Gein first encountered them. Under questioning, Gein said that he went to three graveyards in the area and exhumed the recently buried bodies of nine women and brought them home. Once there, he tanned their skin and used other body parts to fashion his grotesque paraphernalia.

Investigators were initially skeptical that Gein had mostly used already dead bodies, so to corroborate his story, they dug up two of the graves Ed had indicated. They were empty.  Gein also claimed he went in a daze dozens of other times to the cemeteries with the intent of digging up freshly buried bodies, but “woke up” from his daze before doing the deed and instead went home.

A slight hiccup in the trial came about as the result of Sheriff Art Schley bashing Gein’s head against a brick wall (among other violent interrogation techniques that required the intervention of other officers) to get him to confess, rendering Gein’s confession inadmissible in court. There was also the issue of the fact that the police did not have a warrant when they initially searched Gein’s residence.

After extensive psychological and psychiatric testing, to no-one’s great surprise it was established that Gein was not mentally fit to stand trial. The judge committed Ed Gein to the Central State Hospital for the criminally insane in Waupun, Wisconsin. After a decade, Gein was finally deemed competent to stand trial for his atrocities.

Gein’s trial for the murder of Bernice Worden began on November 7, 1968. His guilt was pretty much a given; what was up for debate was the question of Gein’s sanity, specifically if he understood the wrongfulness of his deeds at the time of the incident.

The defense maintained that Gein was a slave to his deviant impulses and could not appreciate the consequences of his actions. Two experts testified at the trial that Gein suffered from a severe mental disorder rendering him unable to control his actions to live a life within the limits of the law.

In the end, Ed Gein was found guilty of first degree murder and then subsequently deemed criminally insane at the time of the murder. He was never tried for the murder of Mary Hogan, owing to it simply being a waste of tax payer money to do so given he was going to be spending the rest of his life at a mental health hospital anyway. He was first sent back to Central State Hospital and then later transferred to the Mendota Mental Health Institute in 1978. He died in 1984 at the age of 78 of cancer and was buried next to his mother in Plainfield.