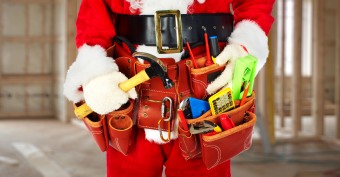 To most people, re-gifting an unwanted Christmas present is rude, ungrateful and a little miserly. However, to Roy Collette and Larry Kunkel, it was not only a treasured Christmas-time tradition that they upheld for well over two decades, but an ever escalating game to see which one would fail to be able to re-gift the pair of pants in question first.

The origins of this trousers-based Christmas tale go all the way back to the 1960s, when Larry Kunkel’s well-meaning mother gave him a pair of yellow-brown moleskin pants one Christmas while he was studying at St. Cloud State University, believing that they’d keep him warm during the winter. Kunkle wore the pants a reported three times before realising that in the harsh, unforgiving Minnesotan winters he had to endure at University, the pants would stiffen uncomfortably.

So, the following year, Kunkel re-gifted the pants to his brother-in-law, Roy Collette, who sported a similar build. Like Kunkel, Collette found that the pants were uncomfortable during winter and, lo and behold, Kunkel found the pants under his Christmas tree the very next year. This amused Kunkel and for several years, the two continued to exchange the pants each Christmas until Collette had the bright idea to roll the pants up as tightly as possible before cramming them into a small, “3 foot long, 1 inch wide pipe”. Collette, saw this move as a joke, Kunkel on the other hand saw it as a challenge.

Wanting to outdo his brother, a year later Kunkle took the pants, folded them into a tiny square and wrapped them tightly with several dozen feet of steel wire. Collette rose to the challenge admirably, freeing the pants before putting them into a wooden box filled with rocks that he then nailed shut and had banded with strips of steel. Collette patiently waited for a year before dutifully delivering the box to Kunkle on Christmas eve. And thus, the game was afoot- who could successfully put the pants in a container so unwieldy that the other wouldn’t be able to get them out to re-gift the next year.

To keep things interesting and sporting over the years, the two men agreed to a number of rules. First, if the pants were damaged, either while being wrapped or unwrapped, the game would end and the loser would be the one who damaged them. Another rule was that neither man could spend any money wrapping the pants (agreeing to use only junk parts, things they had lying around, or items they could acquire from others for free) and that delivery expenses had to be kept to a minimum. Finally, it was agreed that they had to wrap the pants in a way that they felt was “morally, legally and spiritually correct” given the spirit of the game.

And so it was that the two men came up with increasingly fiendish ways to wrap the pants to make it all the more difficult for the recipient to get them out. For example, after receiving the pants inside of the stone filled box, Kunkle returned them mounted inside a window (complete with a 20 year guarantee) and sent them back. Collette’s response was to put the pants in a coffee can which he then put into an old oil drum which he filled with reinforced concrete.

As the wrapping efforts became more and more elaborate, the yearly tradition came to the attention of local newspapers and business owners, who were only too happy to help the men outdo one another, often footing the cost of delivery on their behalf.

Some of the more outrageous wrapping efforts included a 600 pound safe that had been welded shut and covered in seasonal, festive wrapping (which was kindly supplied and delivered to Kunkle by a branch of the company he worked for near Collette’s house), a truck tire filled with concrete, and in a 1974 Gremlin’s glove compartment. If that last one doesn’t sound that bad, we should point out that Kunkel had the car crushed into a 3 foot wide cube before delivering it with a note stating that the pants were in the glove compartment.

Perhaps getting annoyed at the countless hours spent carefully extracting the pants without damaging them, one year Collette tried to get Kunkel to stop the game, suggesting they gift the pants back to his mother. Collette liked this idea and had the pants sealed inside “bulletproof” glass and sent them to Kunkel to pass on to his mother. That Christmas, Kunkel delivered a car filled with concrete to Collette’s house and told him that the pants, still inside the bulletproof glass, were inside.

In 1985, Collette hid the pants inside a gigantic, four ton concrete Rubik’s cube that he then covered with 2000 board-feet of lumber. In 1986, Kunkel returned the pants inside a car, into which he’d welded over a 100 generators that Collette had to meticulously take apart to find the pants somewhere within without damaging them. No source we could find mentions exactly what the pants were housed in for the two years following that, but we do know what happened in 1989 when it was, once again, Collette’s turn to wrap the pants.

After some deliberation, Collette decided to seal the pants inside of an insulated container that would then itself be sealed inside over 10,000 pounds of glass. Collette had all of the kinks worked out and had even managed to convince a friend in charge of a glass manufacturing company to supply the glass free of charge, so that he wouldn’t break the rules by spending any money. However, tragedy struck when the insulation for the pants failed while molten glass was being poured over them, causing them to burst into flames. A heartbroken Collette, now officially the loser of the over two decade long game, swept up the ashes and placed them in an urn, which he had delivered to Kunkel that year with a note reading:

Sorry Old Man, here lies the pants … An attempt to cast the pants in glass brought about the demise of the pants at last.

Kunkel graciously accepted the urn and placed it on the mantle above his fireplace. Although Collette was worried that Kunkel would continue the game with the urn, being quoted as saying “Larry’s the most competitive person I know. I won’t be surprised if I get the ashes back – in something – next year.” However, as far as we can tell, the pants were never re-gifted again and currently enjoy a quiet burnt-up life in an urn.