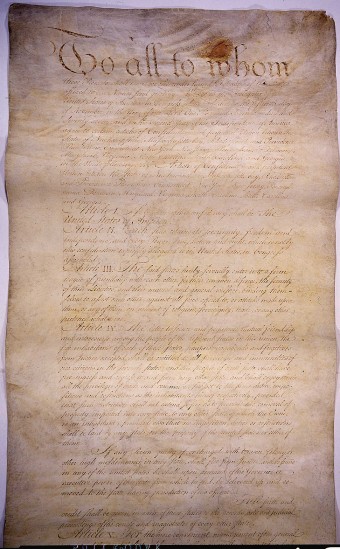 “Monday September 9, 1776. Resolved, that in all Continental Commissions, and other Instruments where heretofore the Words, ‘United Colonies,’ have been used, the Stile be altered for the future to the United States.”

If you want to get all technical about it, today is the birthday of the “United States.” The country may have declared its independence on July 4th (though contrary to popular belief, nobody actually signed that declaration until a month or so later), that was done as a collection of colonies. And that’s exactly what it was known as – the “United Colonies.”

Once the colonies began to consider themselves no longer colonies of England, but rather a completely separate entity, this naturally led to the need for a name to express that. When things started heating up over things like the Stamp Act and the Tea Party, taking united action against the old county was rapidly gaining support. Revolutionaries like Thomas Paine were already using the “free and independent states of America” to describe the thirteen colonies.

It’s also true that in the Declaration of Independence there are references made to the “united States of America”, using “united” as an adjective to point out the fact that the states in America were bound together in their resolve to break up with King George.

The term “united states” was clearly being used by some average citizens also, as evidenced by this letter written to the Pennsylvania Evening Post in June 1774, “I shall rejoice to hear the title of the United states of America.” By the end of June 1776, the people of Philadelphia were referring to the union by this designation as well.

And so it was that when the new country needed a name, they decided to go with the obvious. Not long after producing their famous Declaration, the Founding Fathers put their heads together again and drafted the Articles of Confederation (See: The Constitution Before the Constitution). In it, they proclaimed, “The name of this Confederacy shall be ‘the United States of America.’”

But things got a bit hectic, as you might imagine, and the Articles of Confederation sat around until 1781 when it was finally officially ratified by all 13 states.

So if the spirit moves you, it would be perfectly acceptable to shoot off some fireworks on September 9… though given the number of major fires recently burning up certain regions of those united states, maybe don’t actually do that if it’s a bit dry around you… 😉