This Day in History: September 10th- The Blitz and Buckingham Palace 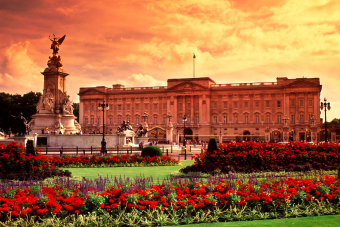 “I am glad we have been bombed. It makes me feel I can look the East End in the face” – Queen Elizabeth

In September of 1940, Londoners were in the midst of a Nazi bombardment that became forever known as the Blitz. On September 10, an air raid completely destroyed the Royal Chapel at Buckingham Palace. It was the third day in a row that the palace had been hit.

King George VI, father of the current Queen, Elizabeth II, wrote a note on a photo depicting some of the damage inflicted by the attack that day: “Bomb exploded 1.25 a.m. Tuesday Sept 10th. Every window broken on all floors. The only exception is swinging lamp under Garden entrance canopy.” 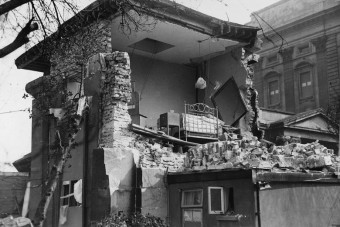 And there was more to come. During the Blitz, the Palace was struck by the enemy on sixteen separate occasions – nine of which were direct hits. The British government urged the Royal family to seek safety in Canada, or at the very least to leave London, but the Queen was quoted as saying, “The children won’t go without me. I won’t leave the King. And the King will never leave.”

Eventually the teenage Princesses Elizabeth (the present Queen) and her younger sister Margaret were sent to the relative safety of Windsor Castle, but the King and Queen resolutely remained in residence at Buckingham Palace. 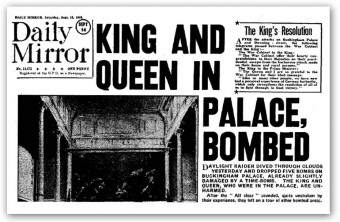 A few days after the September 10th bombing, Queen Elizabeth detailed the events of a daylight raid that occurred on Friday, September 13, 1940 in a letter to her mother-in-law, Queen Mary.

…At this moment we heard the unmistakable whirr-whirr of a German plane – We said “ah a German”, and before anything else could be said, there was the noise of aircraft diving at great speed, and then the scream of a bomb – It all happened so quickly, that we had only time to look foolishly at each other, when the scream hurtled past us, and exploded with a tremendous crash in the quadrangle –

I saw a great column of smoke & earth thrown up into the air, and then we all ducked like lightning into the corridor – There was another tremendous explosion, and we & our 2 pages who were outside the door, remained for a moment or two in the corridor away from the staircase, in case of flying glass. It is curious how one’s instinct works at those moments of great danger, as quite without thinking, the urge was to get away from the windows. Everybody remained wonderfully calm, and we went down to the shelter – I went along to see if the housemaids were alright, and found them busy in their various shelters – Then came a cry for “bandages”, and the first aid party, who had been training for over a year, rose magnificently to the occasion, and treated the 3 poor casualties calmly and correctly –

Darling mama, I do hope that you will let me come & stay a day or two later – It is so sad being parted, as this War has parted famillies.

With my love, and prayers for your safety, ever darling Mama your loving daughter in law

P.S. Dear old B.P is still standing, and that is the main thing.