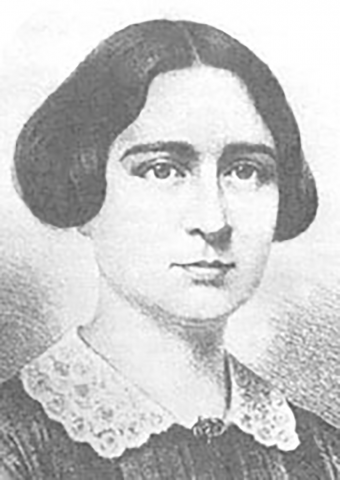 Antoinette Brown Blackwell, reformer, author, and women’s rights activist was ordained as a Congregationalist minister on September 15, 1853. Blackwell is recognized as the first woman to be ordained by an established Protestant denomination in United States history.

Antoinette “Nette” Brown was born on May 20, 1825, in Henrietta, New York. She was the seventh child of Joseph and Abigail Morse Brown, Liberal Congregationalists who taught their children that God was a merciful, friendly presence.

By the time she was eight, Antoinette knew she wanted to be a preacher, but her Sunday school teacher informed her that girls could not be ministers. Her mother supported her daughter’s ambition, so Antoinette continued to work toward her dream. When she began to lose faith, she would reach for the small white ribbon pinned to the inside of her collar – a reminder from her mother to hold firm when others criticized her.

In 1850, Antoinette completed her theological studies but was denied a degree. The Congregational Church initially wouldn’t even allow her to preach because of her gender but relented a year later, yet still refused to grant her ordination. That white ribbon must have gotten quite the work-out.

For the next two years, Antoinette began lecturing on reform issues, especially women’s rights. She accepted an invitation from the Congregational Church of South Butler, New York, and was ordained there on September 15, 1853. She entered her ministry with great enthusiasm. She wrote, “The pastoral labors at S. Butler suit me even better than I expected, and my heart is full of hope.”

She was chosen by her church to be a delegate at the 1853 World’s Temperance Convention, only to be shouted down by the male clergy present for having the temerity to speak.

What Antoinette wasn’t prepared for was the disdain from her own sex. On the whole, the women in her church were not supportive of her role as a minister and reportedly treated her almost as poorly as the men. Worse still, her feminist friends, such as Susan B. Anthony, Elizabeth Cady Stanton, and Lucy Stone (who was also her future sister-in-law) thought Antoinette’s battle to be accepted in an institution as patriarchal as the church was a huge waste of her time. She was adrift and alone, and returned to the family farm in Henrietta to recharge her batteries and take stock of her life.

In 1856, Antoinette married Samuel Blackwell, a businessman and abolitionist. They were a couple eons ahead of their time. Antoinette continued writing and lecturing after their children were born (they had five girls), and Sam took on half of the housework and childcare. She did most of her writing when her children were growing up, saying it “easily coincided with family duties.”

Blackwell became more immersed in women’s suffrage and was one of the founders of the Association for the Advancement of Women in 1873. She was also active in the American Association for the Advancement of Science. Antoinette’s philosophy was no longer in line with the Congregationalists, so she joined the more liberal Unitarian Church in 1878. Her alma mater Oberlin College, who had refused to grant her a degree all those years before, granted her an honorary A.M. that same year. Honorary.

The Elizabeth Society of Elizabeth, New Jersey, where she and Samuel lived most of their married life, recognized Antoinette as minister emeritus of All Souls Church in 1908.

Antoinette Brown Blackwell was the only suffrage pioneer who attended the first 1850 Woman’s Rights Convention in Worcester, MA still alive when the 19th Amendment passed. She cast her vote for Warren G. Harding on November 2, 1920, at the age of 95. She died the following year.