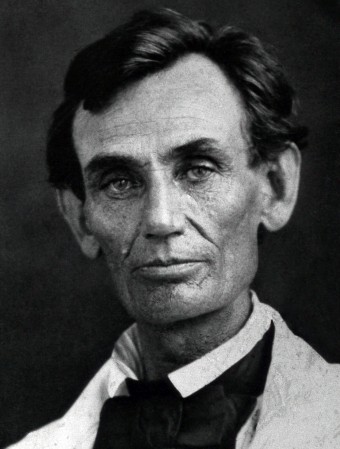 The Abraham Lincoln bloodline shed its last drop in 1985. Or did it?

A year after Robert Todd Lincoln Beckwith’s death in 1985, a 17-year-old boy appeared in court to accept a million-dollar settlement from the Lincoln estate. Beckwith was the last of the 16th president’s three great-grandchildren to pass away. None of the three were believed to have produced any kids. So who was this kid, and why did Lincoln’s estate pay him?

At the time of Abraham Lincoln’s assassination, his family tree had a single living shoot: Robert Todd Lincoln, the only one of the president’s four children (all sons) to survive to adulthood. Robert Lincoln not only survived, he thrived, perhaps driven by a compulsion to prove he was more than just Abe Lincoln’s son. “No one wanted me,” he once said. “They wanted Abraham Lincoln’s son.” What they got was a Harvard-educated lawyer, banker, and corporate executive who also served as U.S. Secretary of War under President James Garfield. But he was not “a man of the people” like his father. In fact, he was said to have an almost “morbid repugnance” for public life.

Nevertheless, Robert Todd Lincoln did become president…of the Pullman Railroad Company. (Ironically, he’d been dubbed “the Prince of Rails” during the 1860 presidential campaign because of his presidential father’s reputation as a “rail-splitter.”)

As a railroad tycoon, Robert made enough money to leave his father’s humble beginnings behind. In 1902, he acquired a 412-acre property in Vermont, where he built a luxurious 24-room mansion. He called the estate “Hildene.” Inside the mansion was an impressive library decorated in the style of a first-class Pullman coach and an entry hall that boasted a thousand-pipe electromagnetic organ. The organ was installed in 1908 at a cost of $11,000—about $282,000 in today’s dollars.

By 1909, the family had moved so far from Abe Lincoln’s log-cabin roots that when President Theodore Roosevelt presided over a ceremony designating Lincoln’s birthplace in Kentucky a “national historic site,” not a single Lincoln descendent showed up. Historians say that the president’s son was ashamed of the modest cabin in which his father grew up and had already started referring to Hildene as his “ancestral home.”

Robert and his wife, Mary Harlan Lincoln, had three children. Their only son—Abraham Lincoln II, called “Jack”—was a brilliant young man and was ready to follow in his father’s footsteps at Harvard. But first he was sent off to Versailles, France, to prepare for his entrance exams. There, the 16-year-old heir to one of the most revered names in American history discovered a carbuncle—a boil-like abscess—in his armpit. A French surgeon decided to lance it. Bad idea: Carbuncles are typically infected with staphylococcus, a particularly nasty strain of bacteria. Lancing the carbuncle sent the staph infection into Jack’s lymph and vascular systems, and within a few months Honest Abe’s namesake was dead.

That left Jack’s two younger sisters—Jessie and Mary—to carry on the line. Mary was nicknamed “Mamie” to distinguish her from her mother (Mary Harlan) and her grandmother (Mary Todd). In 1891, the year after her brother’s death, 22-year-old Mamie married Charles Bradford Isham, her father’s secretary. The following year, her only child, Lincoln Isham, was born.

Mamie’s sister, Jessie, got to keep her name, but she rebelled anyway. Against her parents’ wishes, she married a college football star named Warren Wallace Beckwith in 1897. Beckwith claimed that his mother-in-law meddled in his marriage from the start. She’d never stopped mourning Jack and could not bear to be parted from her daughter.

Despite her mother’s meddling, the couple managed to produce two children—yet another Mary and another Robert. Mary Lincoln Beckwith was born in 1898 and called “Peggy” to set her apart from the other Marys. Her brother, Robert Todd Lincoln Beckwith, was born in 1904. After the children were born, Mary Harlan Lincoln tried to control them, too. In 1905, she moved Jessie and both children to Europe, leaving Warren behind. Fed up, Warren Beckwith filed for a divorce, which was eventually granted. He never saw his children again.

Robert Todd Lincoln died of a cerebral hemorrhage at Hildene on June 26, 1926. He’d lived to the ripe age of 82. Instead of burying him in the Lincoln family plot back in Illinois, his wife, Mary Harlan, had him buried at Arlington Cemetery in Virginia. “He made his own history, independently of his great father,” Mary later wrote, “and should have his own place in the sun.” (She felt so strongly about keeping Robert separate from his father in people’s memories that she underlined the word “independently” five times.)

When Mary Harlan Lincoln died in 1937, she left a trust worth more than $3 million (about $48 million today). Its beneficiaries were Peggy Beckwith, Robert Todd Lincoln Beckwith, and Lincoln Isham. According to historian Harold Holzer, Robert Todd Lincoln’s heirs lived “in the luxurious grandeur of Gilded Age nobility.” Apparently, none of Abe Lincoln’s surviving grandchildren held a job after receiving their inheritance (or before the inheritance, for that matter).

Peggy Beckwith moved to Hildene after her mother’s death and stayed there for the rest of her life. She spent her days golfing, dabbling in oil painting, sculpting, and photography, and chain-smoking cigars. Because she tended to dress in knickers and men’s shirts, rumors spread about Peggy’s sexual orientation. No one knows for certain whether the rumors were true, but it is certain that growing the Lincoln family tree was not in her plans. She never married and never had children.

Housekeeping wasn’t in her plans, either. When she died in 1975, the mansion was in disrepair and was overrun with animals, including raccoons. “She’s an odd one,” said Lincoln scholar Ralph G. Newman at the time. “I would call her an eccentric recluse. She doesn’t give a damn about Abraham Lincoln, and she’s rebuffed any attempts by historians to interview her or look for family papers on the farm.”

Peggy’s cousin Lincoln Isham lived the high life in a “swank” apartment in Manhattan’s Carlyle Hotel. He spent his time playing guitar and mandolin and writing songs. Despite catchy titles such as “Baghdad Billy,” “Congo Las Vegas,” and “Madam Bombay,” no one came forward to publish Linc Isham’s music. During the Roaring Twenties, he bought a tavern near Hildene, played a lot of golf, and became a fixture at a speakeasy called the Stork Club on New York’s 51st Street, known at the time as the “wettest” street in the country. He boozed it up with the likes of Ernest Hemingway, J. Edgar Hoover, and Al Jolson.

Isham was married to a New York society girl named Leahalma Correa, but the marriage produced no children. As for his devotion to the Lincoln legacy, he once phoned a judge about paying a visit to discuss an estate matter. “Better come Wednesday,” the judge told him. “We’re closed for the holiday on Thursday.” “What holiday?” Isham asked. The judge paused, and then responded: “Lincoln’s birthday.”

The third heir, Peggy’s brother, Robert Todd Lincoln Beckwith, lived the life of the idle rich on another inherited property in Virginia. He described himself as “a gentleman farmer of independent means.” He was a short, bald stutterer, but viewed himself as a playboy, boasting that he loved sailing, fast cars, and beautiful women. “I’m a spoiled brat,” he once told a reporter.

Beckwith’s personal lawyer, Elizabeth Young, said that in the 50 years she knew him, he never discussed his ancestry and seemed to have little interest in it. “He lived off his wealth,” Young said after Beckwith’s death. “As far as I know, all the money came from the Lincoln family.”

Beckwith married three times. He married the second of the three at age 63—a 27-year-old German native named Annemarie Hoffman. Six months later, she became pregnant. According to one of his lawyers, Beckwith seemed quite impressed with himself for being able to father a child at such an advanced age. The feat was even more impressive given the fact that Beckwith had undergone a vasectomy six years earlier. Can vasectomies fail? Sure. But tests confirmed that Beckwith was “completely sterile.”

Beckwith’s attorney prepared an agreement whereby Annemarie would list the child’s father as “John Doe” or “Father Unknown” on the birth certificate and would make no claims against the Lincoln/Beckwith estate. In exchange, Beckwith agreed to pay her hospitalization costs plus $7,500. But Annemarie had the last word: She listed Robert Todd Lincoln Beckwith as the father anyway, and named her son Timothy Lincoln Beckwith.

After Timothy’s birth in 1968, attorneys at the Washington law firm Frost & Towers, which had handled the Lincoln family’s affairs since the 1920s, took immediate steps to protect the trust. The firm filed a lawsuit seeking a blood test to establish that Timothy Lincoln Beckwith was not Beckwith’s son. But before the tests could be done, Annemarie fled with the baby to West Germany.

Beckwith filed for divorce on grounds of adultery; Annemarie countersued on similar grounds. It took seven years before the proceedings reached court. The doctor who had done Beckwith’s vasectomy testified that recent tests showed Beckwith was “sterilized in 1962 and has been sterile since that time.” The judge ordered blood tests for Annemarie and her seven-year-old son. Again, no tests were performed.

The judge granted Beckwith’s divorce petition, noting in his ruling that Timothy Lincoln Beckwith had been fathered during an “adulterous relationship.” Annemarie’s law team appealed, but lost. The appeals court did rule, however, that the divorce decree didn’t prohibit the boy from making a claim to the inheritance in a separate action.

On Christmas Eve, 1985, Robert Todd Lincoln Beckwith, the “gnarled, scraggly bearded, 81-year-old great-grandson of America’s most revered president,” died in a nursing home in Virginia. The Red Cross, Iowa Wesleyan, and the Christian Science Church were poised to inherit the proceeds of the Lincoln trust, which was worth about $6 million (about $13 million today). Enter: Timothy Lincoln Beckwith, age 17, living in the United States with his mother, Annemarie, who had remarried.

The three charities were so sure Timothy would come after the trust that they opened negotiations with the 17-year-old. After several months of haggling, Timothy’s lawyers and the three nonprofit institutions reached an agreement. In return for about $1 million, Timothy renounced all future claims to the trust. The settlement, according to Attorney John Beck, was in the best interests of the trust, particularly since Beckwith and Annemarie had been married at the time she became pregnant and no blood tests had ever been performed. So the answer to the question, “Did Abraham Lincoln’s family tree wither and die?” is a resounding “Who knows?” What we do know: Timothy Lincoln Beckwith grew up to become a prosecutor with the Florida state attorney’s office. Seems lawyering is in his blood after all.