Betting It All On a Spin- The Story of Ashley Revell 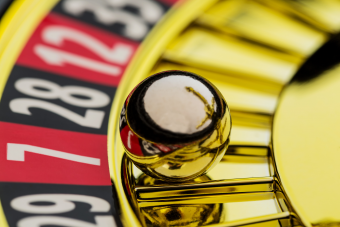 Imagine getting the idea one day to sell everything you own, take the money to Las Vegas, and bet it all on a single spin of the roulette wheel. It sounds crazy. The risk of losing is very real, and you could very well be walking away with just the clothes on your back. In fact, the chance of winning in an all-or-nothing red/black bet on an American roulette wheel is 47.3% (48.6% if playing on a European wheel). Ashley Revell of the United Kingdom decided to take that risk when he sold everything he owned and bet the resulting £76,840 (about £105,400 or $164,286 today) on red in Las Vegas during April of 2004.

Thirty-two year old Ashley Revell’s journey to risking his life savings in Vegas began, by his own admission, over drinks in a pub with friends. One friend brought up the idea of betting everything on a single spin of the roulette wheel, and the slightly inebriated group agreed it sounded like a good idea. Despite the conversation being alcohol induced, the next day, the idea still stuck out in his mind. He later told the Telegraph, “I thought what an amazing experience it [betting all of his money] would be. At the time I wasn’t married, I didn’t have kids. I was completely single. It was now or never.”

It should not be surprising that not everybody supported his plan, and both of his parents opposed the idea. Revell’s father, Mick, told his son that he was a “naught boy”, that he shouldn’t go through with it, and “He should work like all the other kids do.” Ashley spent time convincing them to support him in the endeavor. His father caved first, but his mother took a bit more persuasion before agreeing to support her son.

So he took the next step and began selling all of his possessions and raising a bit of extra cash any way he could. His BMW car, a Rolex watch, golf clubs, and even sentimental items were either sold at auction or during boot (trunk) sales. Some items were harder for him to part with than others, especially soccer trophies and a cricket jumper he received while playing in high school. Afterwards, Revell admitted he regretted selling those items.

Eventually a television crew from the British TV channel Sky One heard about his plan and created a TV mini-series titled Double or Nothing.

Tallying it all up, after selling everything and acquiring funds from other sources such as being sponsored to change his name to “Ashley Blue Square Revell” by a UK online bookmaker, he managed to compile a very respectable total of £76,840.

With the money in the bank ready to be wired over, he boarded a flight for Las Vegas with the camera crew, his friends, and parents in tow. He didn’t even technically have the clothes on his back at this point as what he was wearing was a tuxedo he rented specifically for the occasion.

Plans to place the bet at the Hard Rock Hotel fell through after negotiations broke down with the casino. However, the owners of the Plaza Hotel and Casino seized the opportunity for publicity and agreed to host the roulette game, though directly before he placed his bet told him that they did not advise that anyone, including him, go through with something like this.

Despite the risk, the night before making the life-changing bet, Revell slept well and later said did not doubt his decision to go through with it. Despite the odds technically being slightly against him, he stated, “Thinking back it seems crazy but I was so convinced I was going to win. I was literally going down there to collect my winnings.”

However, he still had not decided the answer to an important question: would he bet everything on black or on red? He waited most of the morning for a sign telling him which to choose but none came. In the end, according to Revell, directly after the ball began to spin, “The first thing that came into my head was red, so I just pushed all my chips forward.”

With many family and friends there with him watching, along with the audience of Sky One‘s show back home, the ball circled the board before landing on a number- seven, a red color.

He admitted after the experience that, “… it was a mad thing to do. And I’m thinking back now about what would have happened if I lost. I’d have had nothing to go back to, nothing to wear. But I’d still have my friends, my family, and they’d always be there for me. So they gave me the security to be able to do this.”

Unlike most who win big in gambling, Ashley decided that tempting fate once was enough for him. He declined to bet a second time and cashed in his chips at the table and walked away.

As for what happened after, Revell spent a small portion of his winnings on a motorcycle trip around Europe, where he met a girl while in Holland. “I took her back to England with me, we married and now we’ve got two children. You could say I have my bet to thank for finding me a wife. ”