Dedication to the Mask- The Story of El Santo 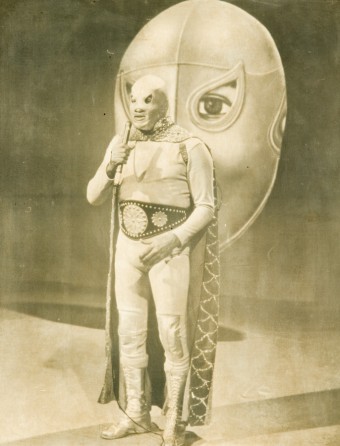 Rodolfo Guzmán Huerta is arguably one of the most famous men in the history of Mexico and yet, rather paradoxically, there are few people who know his name and even fewer who know his face. This is because for almost five decades Huerta was known to the public only as a silver faced luchadore called El Santo. And in that time, he only once removed his mask while in public.

The story of El Santo, which for the non Spanish speakers literally translates to “The Saint”, begins in the Mexican city of Tulancingo where Huerta was born in 1917. The fifth of seven children, Huerta had a modest, structured upbringing during which little of note happened, or at least not enough for it to be mentioned in any of the books about his life we consulted.

It’s noted that Huerta first became interested in Lucha Libre when the sport was just making its first steps to become legitimised in the early 1930s after moving to Mexico city. Upon seeing the high flying theatrics and athleticism of the various wrestlers who worked throughout the city, Huerta vowed to become a wrestler himself and immediately set about training in a local gym.

Though Huerta led a storied, well-chronicled career, exactly when he first made his professional début is a matter of some contention. However, it’s largely agreed that he probably made his career début shortly before his 17th birthday in 1934 under his own name.

Over the next few years Huerta fought under several aliases and masks, variously referring to himself as The Red Man (El Hombre Rojo), The Black Demon (El Demonio Negro) and perhaps most infamously The Bat 2 (El Murcielago II). You see, wrestlers in Mexico tend to take their identities very seriously and the name El Murcielago already belonged to another wrestler who objected to Huerta referring to himself as El Murcielago II; not wanting to offend another Luchadore, Huerta respectfully dropped the persona.

Interestingly, although Huerta would later become an almost mythical figure in Mexican history for being a quintessential hero character, he initially wrestled as a “rudo” a term that is roughly synonymous with the western wrestling term “heel”- this basically means he played a bad guy who fought dirty and played up to the crowd’s jeers and boos.

However, this all changed in 1942 when Huerta took up the mantle of El Santo and began wearing his now iconic silver mask, the design of which was partially inspired by the eponymous Man in the Iron Mask from the Alexandre Dumas novel of the same name. (See: Who was the Real Man in the Iron Mask?) El Santo made his wrestling debut on July 26, 1942, winning an eight man battle royale using a series of high-flying, acrobatic flips and throws that would become a cornerstone of his fighting style.

Throughout the 1940s, El Santo fame’s steadily grew and he quickly adapted a persona as an honest, working-man’s hero who fought against corruption and evil, which inevitably endeared him to the Mexican populace. El Santo’s fame was only bolstered by the increasing availability of televisions throughout the late 1940s and early 1950s. During this period, El Santo claimed a number of famous victories over older, established wrestlers including El Murcielago, the same wrestler he’d once tried to emulate in his initial foray into the sport.

El Santo’s fame reached stratospheric levels when Mexican artist Jose G. Cruz began using his likeness in a comic bearing his name which discussed his various heroic exploits like punching vampires and felling werewolves with explosive hurricanranas. Despite the relatively low quality of the early comics, they proved to be quite popular, running for 35 years straight.

After greedily eying the sales numbers for the comics, movie producers soon began approaching El Santo with offers for him to appear in films. The first of many offers came just months after the first El Santo comic was published in 1952, when the wrestler was offered the the leading role in a movie called, El Enmascarado de Plata (The Silver Masked Man), an endearing nickname the public had taken to calling El Santo.  El Santo reputedly didn’t believe the film could be a success and declined the part, mainly to focus on his wrestling career.

As El Santo predicted, the film wasn’t that popular. However, it did help establish the rather surreal Luchadore genre- a genre almost entirely endemic to Mexico that melded together elements of horror, sci-fi, action and comedy, and also happened to star rippling Mexican men wearing luchadore masks. El Santo was eventually persuaded to star in one of the these movies in 1958 after witnessing the success of his comic; over the course of the next 20 years, he became the most iconic and prolific star of the entire genre, appearing in over 50 films in which he used his wrestling skills to defeat everything from aliens to the Nazis. These movies catapulted El Santo to an even more unprecedented level of fame for a luchadore and their popularity saw him become household name in his native Mexico, even amongst those who had no interest or knowledge of wrestling.

While his many multimedia appearances undoubtedly played a part in his fame, almost since his debut, El Santo had always maintained a certain mystique around himself by never removing his mask in public. His dedication to maintaining the mystery around his identity was such that he even had a chinless mask made so that he could eat without taking the mask off on set during meals; he also had his own voice dubbed over in any movies where he spoke so that even his voice was disguised.

In the film El Hacha Diabolica, which called for El Santo to remove his mask and show his face to the film’s love interest, he agreed on the condition that his character do so while facing away from the camera. Even then, he still got a stand-in to actually perform the scene because he didn’t want the actress to see what he looked like.

In all of his other films, Santo similarly demanded that his character never appear unmasked, regardless of how much sense it made or what his character’s role was. Perhaps the most humorous example of this was in the 1958 film, Santo contra Hombres Infernales, in which Santo played an ordinary police sergeant who inexplicably wore a luchadore mask in every single scene.

Santo’s dedication to maintaining his identity extended beyond his films and into his private life. For example, when El Santo took Jose Cruz to court for trying to replace him in his own comic, knowing that he couldn’t appear in court wearing his mask, he instead opted to cover his face in bandages and don a large pair of sunglasses before explaining to the judge that he’d been in a “wrestling accident“. (El Santo won the case, if you’re wondering.) Stories like these led to rumors that even El Santo’s passport contained a photo of him wearing his mask. While not true, in reality Santo did have a standing agreement with US customs to only remove his mask in a private room so that only the customs agent would see his face.

The only known time El Santo ever broke his vow of secrecy happened about a year after his retirement from the world of wrestling. In January of 1984, during a scheduled appearance on a popular Mexican talk show called, Contrapunto. 10 minutes into the show, El Santo partially removed his mask without any prior warning or announcement, exposing his face publicly for the first time in his entire five decade career. 10 days later, he died of a heart attack.

El Santo’s funeral was one of the biggest in Mexico’s history, with hundreds of friends, (many of whom turned up in masks as a sign of respect) and many thousands of fans coming to pay their final respects. As a final mark of respect and in compliance with his Will, El Santo was buried wearing his trademark mask.