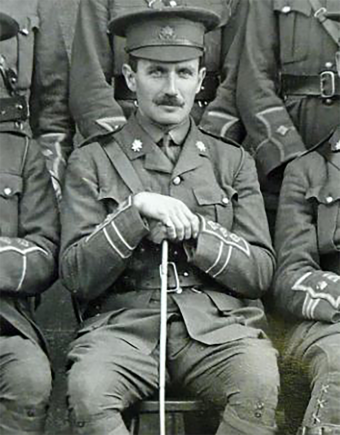 Captain Robert Campbell began his British Army career in 1903 at the age of 18. Shortly after WWI started, in July of 1914 Campbell and the soldiers he was leading, the First Battalion East Surrey Regiment, were sent to Mons-Condé canal in the north west of France.

One week later, after an attack by German forces, Captain Campbell was seriously injured and ultimately captured. He was then treated in a German military hospital in Cologne, and, once healed up a bit, sent to the prisoner-of-war (POW) camp in Magdeburg, Germany.

None of this makes Captain Campbell particularly unique in the “War to End All Wars.” Between 1914 and 1918, approximately 10 million civilians and servicemen were captured and interred at various detention camps.

What makes Campbell’s story different is something that happened two years after his capture. Now in his early 30s, Captain Campbell received word that his mother, Louise, was suffering from terminal cancer. With nothing to lose, Campbell wrote directly to Kaiser Wilhelm II, requesting compassionate leave so that he might see her before she passed.

Surprisingly, the Kaiser agreed, granting him two weeks leave provided he “gave his word as a British Army officer that he would return.”

After giving his word, Captain Campbell was indeed released. Details of how he actually made it home have been lost to history, but it is thought that he traveled through the Netherlands and then took a boat to Kent. Upon arriving home, he spent a week with his mother before returning to the POW camp by equally mysterious means. 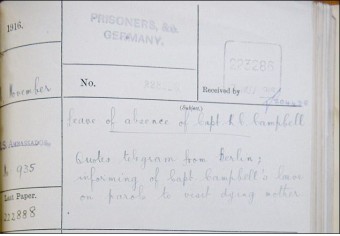 There was no recorded explanation in the British military archives why no one in the army tried to block his return, but presumably a British officer’s honor being at stake had something to do with it.

Whatever the case, in February of 1917, Captain Campbell’s mother died while he was still a prisoner.

Perhaps to keep himself occupied, and said to be a matter of honor and duty, as soon as Captain Campbell returned to the prison camp, he and a group of other prisoners spent the next nine months digging a tunnel out of their camp. This tunnel project was partially successful in that they were able to use it to escape the camp, but were caught near the border of the Netherlands and sent back.

While you may think that Captain Campbell’s story and the show of mercy and good faith on Kaiser Wilhelm II’s part might have inspired the British to do the same, this was not the case.  German POW Peter Gastreich was being held at the Isle of Wight when he learned his father was dying.  He then asked for a leave of absence to go seem him, but the British Prisoners of War Department summarily ruled against this, stating, they

“Cannot recognise the temporary release, on parole, of Captain Campbell as a precedent for such concessions. They were not consulted before leave was granted to the Officer by the German Government and would not have consented to such a proposal had it been put before them.”

At the war’s end, along with the other POWs, Captain Campbell was released and remained in the Army until he retired in 1925. When WWII began, Campbell rejoined the army and served as the Chief Observer of the Royal Observer Corps on the Isle of Wight. He lived to the ripe old age of 81. ultimately dying in 1966.