This Day in History: May 6th- The Birth of an Icon 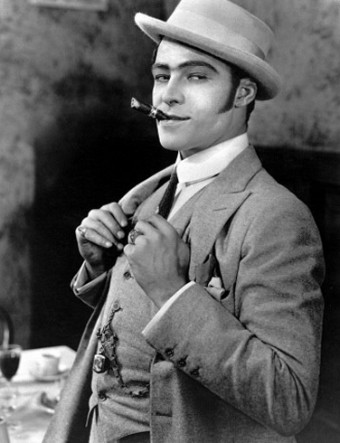 In any event, Valentino’s mother proclaimed him the most beautiful infant in the world. Unsurprisingly, he is thought to have led a somewhat pampered and spoiled childhood.

From this, predictably, Rudy was a bit of a handful but did manage to graduate from the Royal School of Agriculture. He emigrated to the United Stated in 1913 and worked a variety of jobs, including gardener (can’t let that education go to waste), and dancer (and some say gigolo.) His talents as a dancer landed him on the vaudeville circuit performing as Signor Rodolfo, tango-ing with the best of them.

After testifying in a divorce case between heiress Blanca de Saulles and businessman John de Saulles (on the side of Blanca), he was arrested. (All signs pointed to the ex-husband as the one behind the trumped up charges.) Valentino was acquitted, but he thought it best to head west and left New York for sunny California after Blanca de Saulles killed her ex-husband.

Rudy had landed a few minor roles by 1919, always playing the shifty-eyed Latin villain, already a tired stereotype. He also had a short-lived marriage to another aspiring actor named Jean Acker. In 1921, screenwriter June Mathis convinced director Rex Ingram that Valentino had big box office written all over him. Ingram agreed to cast Rudy as the lead in his upcoming film at Metro Studio, The Four Horseman of the Apocalypse.

Valentino was an immediate hit with the public, but Metro dropped the ball, and Rudy took his services over to Paramount. His next movies included Camille, The Sheik and Blood and Sand, which were overflowing with Valentino’s archetypical flaring-nostril sexy sizzle, and established him as a cinematic icon for the ages.

Dissatisfied with the money he was making, considering the dough his films were raking in for Paramount and what other stars were earning in comparison, Valentino decided to break his contract with the studio. Paramount countered by filing an injunction preventing Rudy from making any pictures during the period of his canceled contract. To fill this downtime, he embarked upon a hugely successful dance tour with his new wife, set designer Natacha Rambova, promoting Mineralava Beauty Clay.

When Valentino returned to films, it was under the management of his heavy-handed wife, Natacha. She convinced her husband to play effete dandies in such beautifully filmed but overblown movies such as Monsieur Beaucaire in 1924 and Cobra in 1925. A columnist for the Chicago Tribune referred to Valentino as a “pink powder puff” and cast many a doubt upon his virility; Rudy angrily challenged him to a fist fight.

Valentino had always appealed much more to a female audience, but with his next move he attempted to tip the scales a bit. He ditched Natacha Rambova both personally and professionally, joined United Artists and made two of his best movies, The Eagle (1925), and Son of the Sheik (1926). These films did much to rejuvenate his career and reputation, but unfortunately he didn’t get to enjoy the benefits for very long. Just a few months after Son of the Sheik premiered; Valentino collapsed and was rushed to the hospital in New York City with a perforated ulcer.

Complications set in, and Rudolph Valentino died from peritonitis on August 23, 1926. He became even more of a sensation in death. As one of his leading ladies, Alice Terry, observed, “The biggest thing Valentino ever did was to die.” During Rudy’s wake at Campbell’s Funeral Home in New York, a crowd rushing in to view his body caused extensive damage to the room. At least 100 mourners were hurt in the riot that ensued. It’s estimated that 100,000 people were gathered outside the funeral home, many of them hysterical, disconsolate fans. Numerous suicides were reported, perhaps accurately, perhaps not, related to the star’s untimely death.

After Valentino had been mourned in New York City, his body was transported west by train so Hollywood could pay its respects to one of the most charismatic and well-liked stars in the business. Douglas Fairbanks and Charlie Chaplin were among his pallbearers. He was laid to rest in what was intended to be a temporary crypt, but he has remained there since 1926.

Rudy has not been forgotten, He’s been visited annually first by a mysterious Lady in Black, and now a group of dedicated fans who commemorate his passing every year. After all these decades, Rudy still has star power.