This Day in History: April 17th- The Rise of English 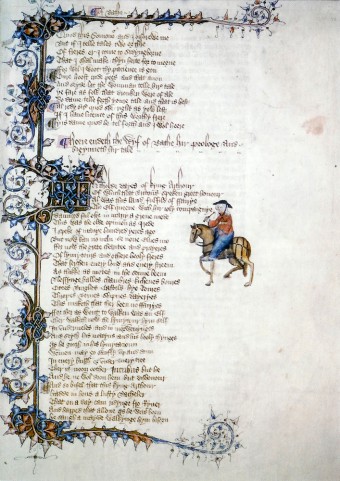 April 17, 1397 marked a turning point in the history of English literature and culture when Geoffrey Chaucer read from his book “The Canterbury Tales” at the court of King Richard II. He read it in English, the language of the common man, instead of the Norman French usually spoken at court. Since the Norman Conquest in 1066, French had been the language of the ruling class. In fact, one of the most famous kings of England, Richard “The Lionheart” barely spoke English at all. English was the language of the peasant, and was slowly dying out. Chaucer would dramatically reverse this trend.

Like the rest of his family who had been in royal service for generations, Chaucer was a professional courtier. During the 1360s, he was involved in peace negotiations during the Hundred Years War. His duties brought him to many of Europe’s greatest cities, including Florence. While there, he discovered the stories of the author Boccaccio, who wrote in Italian, the language of the common people, rather than Latin, the language of the gentry.

Chaucer loved this idea and began writing “The Canterbury Tales”, earthy stories told from the point of view of various people from different classes of medieval English society, from the aristocracy to the worker bees. The characters are embarking upon a pilgrimage to the shrine of St. Thomas at Canterbury. Their individual tales mirror their station in life – knight, parson, clerk, etc., for both good and ill.

In Chaucer’s times, reading was often a group activity done in social settings. One orator would read aloud to an audience, much like sitting down as a group to watch a movie.

It’s believed Chaucer had hoped writing The Canterbury Tales in English would aid in it becoming a courtly language. From the moment he read from the book in April 1397, the use of English began to grow. Courtiers began to use it when communicating with each other and the King. English was also being favored over Norman French in the legal system.

The fact that England and France were at war helped tip the scales a bit too. The King of France had ordered the English nobles who had estates in his country to boot it across the Channel and return to France, or forfeit their holdings there. Any of the nobles who chose to remain in England would naturally consider themselves English after that.

When Henry IV ascended the English throne in 1399, English had become so commonplace that no-one batted an eye when he became the first king to take his coronation oath in his people’s language.

Geoffrey Chaucer, who was partly responsible for this change in his country’s vernacular, died a year later on October 25, 1400. His burial marked the tradition of Britain’s most celebrated writers being laid to rest in Westminster Abbey. Chaucer was the very first to be entombed in what is now called “Poet’s Corner.”