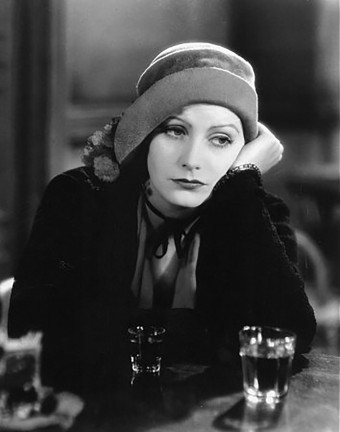 Greta Garbo, the beautiful, talented, iconic Swedish import who set the bar for Hollywood glamor during its golden age, died at the age of 84 on April 15, 1990. In a class all her own, Garbo was one of the few screen stars to make the transition from silent to talking films without losing one iota of her mystique.

Born in Stockholm, Sweden as Greta Lovisa Gustafson on September 18, 1905, Garbo first attracted attention working as a department store clerk helping to support her family. Appearing in advertising films for the store led to her first comedy feature “Luffar-Petter” (Peter the Tramp) in 1922, and a two-year stint at Stockholm’s Royal Dramatic Theatre Acting School. She also changed her surname to the one that millions would come to revere her by – Garbo.

Garbo arrived in Hollywood and signed with MGM studios in 1925. Her first two feature films were commercial and critical successes, but her legendary status was ensured with the release of “Flesh and the Devil” (1927). This picture marked her first pairing with Tinseltown’s favorite leading man, John Gilbert. Their chemistry both onscreen and off was immediate and electric. The audience watched the couple’s initial yearning, sexual tension, and emotional bond form before their eyes on the screen. Brad and Angelina had nothing on these two.

Fully aware of her worth to MGM, she demanded a raise and her choice of directors and working conditions for her films. The studio balked, but threats of returning to Sweden (she was miffed at MGM for not allowing her time off to attend her sister’s funeral) soon made Garbo one of the highest paid actors in Hollywood. Negotiating with Garbo was trickier than dealing with most other stars as she seemed to truly have no problem walking away from the spotlight at any minute if her demands weren’t met.

She joined forces with John Gilbert again in 1927 in the aptly titled “Love.” Garbo made seven more hugely popular silents for MGM before the talkies rendered the silent film obsolete. The advent of sound proved the death knell for many an actor whose looks didn’t match up with their voice. MGM was concerned that audiences would not accept Garbo’s heavy Swedish accent, but they needn’t have worried.

Garbo’s first talking picture in 1930, “Anna Christie”, was billed as “Garbo Talks!” – one of the most famous ad campaigns of the day. She reached the pinnacle of her mystique as a screen queen with the release of “Grand Hotel” (1932). It was in this film that she delivered the classic line that elevated Garbo from movie legend to archetypical goddess- the five words that would follow her throughout her life: “I want to be alone.” (Garbo always argued this point. She insisted, “I never said, ‘I want to be alone.’ I only said ‘I want to be let alone!’ There is all the difference.”)

At the height of her bargaining power, she used some of her clout to help out old flame John Gilbert (they’d split up by then) who was having a hard time getting projects since the advent of sound. In 1933, they did their last movie together, “Queen Christina.” Throughout the 1930s, she continued to be tops at the box office.

By World War II, Garbo’s once formidable hold over MGM had begun to peter out. When the studio refused her request for a salary increase, she did what she had so often threatened to do- she left Hollywood suddenly and permanently. She had many offers over the years to return for one project or another – she always said no. Garbo was done with the movie industry.

She instead chose to live quietly in New York City, traveling throughout Europe, enjoying an upscale yet simple life. She avoided publicity as she always had but was seen walking around her Manhattan neighborhood from time to time. She died of pneumonia and kidney failure on April 15, 1990.

Garbo was one the first truly modern women- assertive, savvy, smart and not afraid to show it, and unabashedly single. She blazed a trail for all the women in Hollywood that would follow, and for all women everywhere who wanted to live life on their own terms, answering to no-one but themselves.