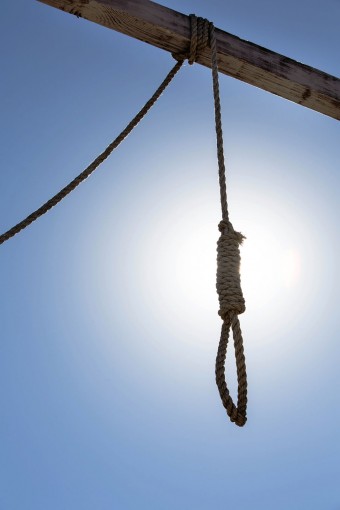 On January 22, 1779, notorious Tory outlaw Claudius Smith, who had plundered and terrorized the people of New York during the Revolutionary War, was executed on a makeshift gallows in Goshen, New York. Since his mother had long suspected he’d meet such an end and “die with his boots on”, he supposedly kicked off his shoes before he was strung up.

In the early days of the Revolutionary War, the areas around present day New York City, the Hudson River, and Orange County were considered somewhat neutral zones. The British army was camped out in NYC, and General Washington’s troops were spread out along the Hudson.

But neutral hardly meant safe, as the area was rife with ruthless bands of marauders called “Cowboys” and “Skinners.” The Cowboys were mainly Tories, loyal to the British crown, who plundered the locals of their livestock and valuables. The Skinners generally professed themselves to be Patriots, but they were known to rob friend and foe indiscriminately.

The common folk living in the area couldn’t win. No matter which side you swore loyalty to, you were bound to get robbed – or worse. No-one’s property was safe, and traveling alone was an act of rank insanity.

Contemporary historian Joshua Hett Smith left an account of the horrifying conditions the locals lived under during that time:

No one slept safely in his bed. Many families hid themselves at night in barns, wheat-ricks, corn-cribs, and stacks of hay; and on each returning day, blessed their good fortune that their houses had escaped the flames. The composition of these predatory gangs of Cowboys was loose, including confirmed Tories, British deserters, runaway slaves, and Indians; their number was indeterminate; and their tastes in thievery were undiscriminating.

The leader of one of the most notorious gangs of these cowboys was a Loyalist named Claudius Smith. He planned most of his schemes from caves nestled in the Ramapo Mountains, earning him the nickname “Cowboy of the Ramapos.” Stealing livestock was a favorite pastime of the marauding Smith, especially from rebel-sympathizing Whigs.

He was a little pickier than some when choosing his victims – he preferred to rob those who could afford it, and generally left the poor alone. He and his ilk caused enough mischief in the area that General Washington could not keep tabs on British General Howes’ whereabouts.

Smith managed to evade capture until members of his gang shot and killed Patriot Major Nathaniel Strong while robbing his house (it’s still unclear whether Smith was one of the shooters, or even present at the time). In any case, a warrant was put out for his arrest, and a $1,200 bounty put on his head (the wanted posters described Smith as seven feet tall). Smith made his way to British-held Long Island and was captured in October.

On January 13, he was tried and found guilty on three counts of theft. When he was sentenced to hang and was asked if he had anything to say, he allegedly replied, “No. If God Almighty can’t change your hearts, I cannot.”

On the day of his execution, Smith walked confidently to a cart where a noose hung from a tree, and bowed to those in the crowd he recognized. He scanned nearby Slate Hill, no doubt for the sight of his comrades coming to his last-minute rescue, but they were not to be found. He showed no sign of emotion as the cart was pulled from under him.