The Man on the Raft: The Story of Poon Lim 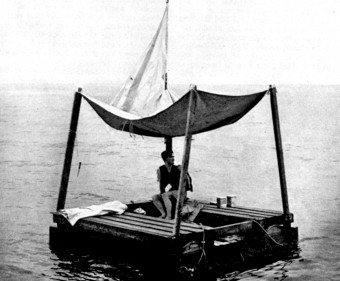 Poon Lim sitting on a reconstruction of his raft, built at the request of the U.S. Navy

On the morning of April 5, 1943, about ten miles off the coast of Brazil, a fishing family in their small boat spotted a Chinese man on a much smaller wooden raft bobbing up and down in the Atlantic Ocean. Waving a shirt and jumping, the man was clearly in distress, so the Brazilian family turned their boat around and picked him up. Climbing aboard, he was overjoyed, hungry, and very grateful. As they set sail again, the man danced and ate whatever was given to him. After three days, they landed in Belem, Brazil, a town at the mouth of the Amazon River. Authorities were waiting for him as the man, unassisted, walked off the boat. Considering his ordeal, this was an amazing feat. You see, Poon Lim had been stranded at sea for 133 days, a record for a lone human.

Born in Hainan, China, the main island of a series of islands in the South China Sea, Poon Lim attended school, unlike many other kids his age, thanks to his brothers sending money from their factory jobs. At 16, Lim’s father, believing that life would be better elsewhere and out of fear that Lim would be drafted to fight against the rapidly advancing Japanese, sent him to join one of his brothers on a British passenger freight, working as a cabin boy.

At first, according to his own account given to Ruthanne McCunn in the book Sole Survivor, he didn’t take to life at sea, getting sick and teased constantly. He eventually caught on to the ways of the ship, but conditions were terrible for Chinese crew members in general. Discriminated against, given the worst jobs, and shoved into overwhelming cramped living quarters, this was not the better life Poon, or his father, envisioned. His brother tried to make him feel better by saying, “Hey, at least the British officers aren’t beating us.”

As the years went by, the conditions for Chinese crewmen on British ships got better, mostly because they had too. The supply of British crewmen had decreased due to World War II. Merchant ships, in order to keep up with the intense demand the war had created, had to entice workers by improving conditions and increasing pay for Chinese crewmen.

Lim had actually quit as a cabin boy in about 1937/1938 and moved to Hong Kong to enroll in mechanics school. After six months, the sea came calling again. His cousin told him of the improved conditions and, most importantly, better pay. Plus, the Japanese were poised to capture Hong Kong any day and Lim did not want to be around when that happened. Thus, he signed on working under his cousin as a Second Steward on the SS Benlomond.

The SS Benlomond began its journey in Cape Town on November 10, 1942 and was crossing the Atlantic Ocean on its way to Suriname (a Dutch-owned plantation colony in South America) before sailing to New York. The Benlomond was known as a “tramp steamer” in that it did not have a fixed schedule nor published ports of call. Tramp steamers also often traveled solo, unlike other trade ships that went in convoys. The Benlomond was armed, but its heavy, slow movements made it an easy target.

On November 23rd, more than two thirds into the voyage, at about 11:30 am, it was torpedoed by a Nazi U-boat. The ship sunk within two minutes. 56 men perished, 24 British and 22 Chinese, and only one man survived. That man was Poon Lim.

In the mad rush of a sinking, exploding ship, Lim was still able to grab a life jacket, which likely saved his life, as he was, by his own account, a poor swimmer. He then swam away from the sinking ship as fast as he could. As this was all happening, he was spotted in the water by the aggressors, the Nazi U-boat, but was ignored, left to suffer in the cold dark waters.

He floated in the ocean for what he estimates was around two hours until he was able to find one of the ship’s life rafts and swim to it. It was a wooden raft about eight feet square, with a partial canvas roof. Luckily for Lim, it had provisions on it: a forty liter jug of water (about ten and a half gallons), several tins of biscuits and hardtack (a long-lasting cracker), pemmican (sort of like beef jerky), malted milk tablets, lumps of sugar, lime juice, two flairs, a flashlight and even some chocolate. This was to be Lim’s home for the next 133 days.

He initially thought he was going to get rescued quickly, as soon as clients realized that the Benlomond hadn’t docked. So, he only partitioned the food out for thirty days. It eventually dawned on Lim that even if they did know the ship hadn’t come in yet, no one was going to come looking for it under such dangerous, war-time conditions. He decided that he would take matters into his own hands; if he could survive long enough, maybe the raft would take the current and float to land by itself.

In order to survive, he fashioned a rain-catching receptacle out of the canvas from the roof and his life jacket. He made a fishing hook out of the wire from the flashlight and jagged edges of the tins of biscuits. For bait, initially he used bits of his hardtack.

Beyond fishing, he decided that he needed to find a way to catch the other animal he had seen on a constant basis while he floated – seagulls. To do this, he came up with a little trickery. He took the seaweed from the bottom of the raft, matted it down, and shaped it until it looked like a nest. Then, he let a fish rot next to the “nest.” Soon enough, a seagull swooped in and Lim went after it, eventually breaking its neck (after suffering a few cuts from the bird in the process). He then sucked the blood out of the bird, and dried the remaining flesh out with saltwater, making perfect seagull jerky.

Because he was a poor swimmer, he knotted one end of hemp rope to his wrist and the other to the raft, in case he fell in. By day 60, he was confident enough that he began to swim twice a day in order to keep his physical strength up.

Things were going as well as can be expected until the second month when a storm nearly destroyed his raft. He survived and was able to repair the craft, though he lost his water and food supply.

Beyond storms and the constant difficulty of acquiring food and drinkable water, sharks were also a problem. They were attracted to the remaining blood of the fish that he gutted and hung on lines to dry the meat.

The sharks would often surround his boat, even occasionally ramming the raft. But while sharks are predators looking for food, so was Lim. He crafted a sharp hook out of a nail he managed to pry from the raft; the next shark that came close after he’d done this, he managed to hook and pull up into the boat. A fight ensued on the small craft, but Lim ultimately won out, supplying him food for days, including a Hanian delicacy – dried out shark fins. 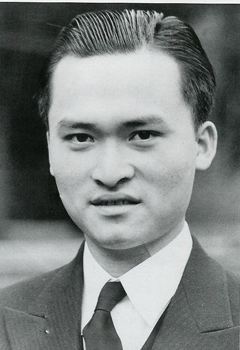 And so he subsisted remarkably well for 133 days. He came close to rescue three times during the ordeal- once when he was spotted by the crew of a passing freighter, who ignored him.  Lim felt it was because he was Chinese. In a second instance, he was spotted by American airmen out on patrol.  They even flew low to investigate, but ultimately no rescue resulted.  This may have been because very shortly after they spotted him, a storm came up and moved Lim’s raft far from where he had been when the planes flew over.

In yet another instance, a German submarine spotted him and surfaced, but ultimately decided to leave him to his fate.

This all came to an end when he found himself being picked up by Brazilian fishermen on April 5, 1943, about ten miles from shore.  Three days later, they landed in Belem, Brazil, a town at the mouth of the Amazon River.

Upon arriving in Belem, despite being relatively healthy, all things considered, and having only lost about 20 pounds during his voyage, he spent four weeks at the local hospital. When he was released, the British consul arranged for him to go to Britain, where he was given a British Empire Medal by King George VI.

The Royal Navy was so impressed by his survival skills and story that they incorporated his techniques into their manuals. After the war, he wanted to emigrate to the US and, despite initial difficulty due to the Chinese immigration quota having been met (this would exist in the US until 1965), he was eventually allowed into the United States thanks to special legislation written by Democratic Senator Walter Magnuson of Washington.

Poon Lim lived to the age of 72, passing away in 1991. To this day, he still holds the official record for longest time for a lone person to survive being adrift at sea in a life raft. When told this in 1943, Poon Lim responded, “I hope no one will ever have to break that record.”