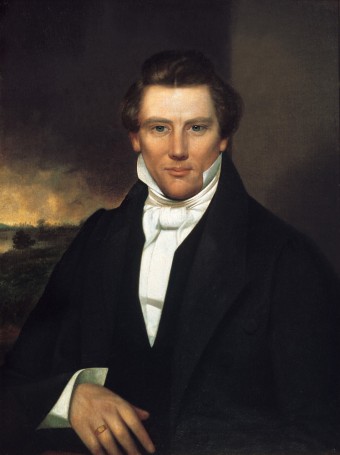 “You don’t know me – you never will. You never knew my heart. No man knows my history. I cannot tell it; I shall never undertake it. I don’t blame anyone for not believing my history. If I had not experienced what I have, I could not have believed it myself.”– Joseph Smith, April 7, 1844

Seen as a brilliant charlatan by some and as an inspired prophet by others, Joseph Smith Jr. is still a highly controversial figure today. His story began on December 23, 1805 when he was born in Sharon, Vermont to a family hard-pressed to make a living. He received little in the way of formal education, learning at home the basics of reading, writing and general arithmetic.

After his family had moved to New York, Joseph was struggling to decide which of the many religions he should join. In the spring of 1820, he went deep into the woods and asked God which church was right for him. Joseph said while he was praying he was visited by two “personages” who told him they were God the Father and Jesus Christ. They instructed Joseph not to join any church.

In 1823, Smith had another vision, one that would forever change the course of his life. He claimed he was visited by an angel named Moroni, who told Joseph about an ancient account of god’s interactions with the former inhabitants of North America. In 1827, the angel delivered this record to Smith, which was inscribed on gold plates.

With the aid of two sacred stones, the Urim and Thummim, Smith set about translating the gold plates by “the gift of god.” The result became the Book of Mormon, first published in 1830. The following month, Joseph Smith formed The Church of Jesus Christ of Latter-day Saints, and acted as its first president.

Smith was not a remote figurehead in the church. He actively worked to convert new members, and spearheaded their move west to Kirtland, Ohio, and then to Commerce (later Nauvoo), Illinois. Once in Illinois, Smith was forced to deal with a public that was often distrustful or downright antagonistic to the Mormons. These negative feelings often erupted into mob violence, causing Smith and several of his associates to run afoul of the law and get arrested on numerous occasions.

In his later years, Smith became the dictator over the small town of Nauvoo. When he didn’t like what was being printed about him in the town’s papers, he had the printing press destroyed and declared martial law. Not long after, both Joseph Smith and his brother Hyrum were arrested. Two days after they were apprehended, while in jail and under the protection of law enforcement officers, the brothers were murdered by an angry mob on June 27, 1844.

Many people thought it was the will of God, since Joseph Smith was thought of as nothing but a no-good blasphemer. Some deeply mourned the loss of their prophet. Yet others had more measured responses, such as the Iowa Bloomington Herald, who reported: “Assassins may plunge the dagger to the heart of the innocent and unsuspecting savages may torture, kill and slay, but their crimes are virtues in comparison with the heart of the reputed civilized man who in cold blood murders the victim who has voluntarily placed himself in the hands of his enemy, to be tried and dealt with according to law.”