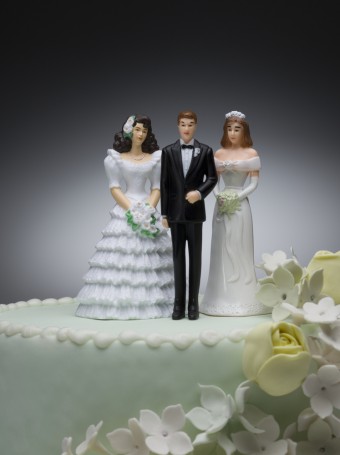 In 1890, Mormon leaders were forced to issue the “Mormon Manifesto,” in which they admonish all church members to obey the U.S. anti-polygamy laws. The church leaders had been left with little choice in the matter – their temples would be seized by the government and Mormons risked serious penalties if they did not abandon the practice of polygamy immediately.

The practice of “plural marriage” had been part of the doctrine of the Church of Jesus Christ of Latter-day Saints since at least the 1840s, though there is some evidence that Joseph Smith, the church founder, was advocating polygamy as early as 1831, just not making it an official church doctrine yet as the practice’s “time had not yet come”.

The most reliable evidence would suggest that Smith began himself practicing polygamy at least as early as 1841 (and possibly before). It is estimated that he married more than 29 women, though several were “sealed” to him after he died, rather than when he was alive, so not marriage in the traditional sense.

His secretary, William Clayton mentions some of Smith’s marriages in 1843:

On the 1st day of May, 1843, I officiated in the office of an Elder by marrying Lucy Walker to the Prophet Joseph Smith, at his own residence. During this period the Prophet Joseph took several other wives. Amongst the number I well remember Eliza Partridge, Emily Partridge, Sarah Ann Whitney, Helen Kimball and Flora Woodworth. These all, he acknowledged to me, were his lawful, wedded wives, according to the celestial order. His wife Emma was cognizant of the fact of some, if not all, of these being his wives, and she generally treated them very kindly.

It should be noted, though, that contrary to this account, Emma, his first wife, was not pleased with the other marriages and wasn’t shy on letting this be known. Further, though accounts are conflicting on whether she was telling the truth on the matter, she later claimed she had been unaware of her husband’s other marriages until reading Orson Pratt’s 1853 booklet, The Seer.

The fact that Mormons practiced polygamy was a major point of contention between themselves, the government, and the general public during their time in Illinois.

Despite this, the church elders publicly stated in 1852 that plural marriage was a major tenet of the Mormon faith.  Later, in 1856 at a Republican Convention, the issue was added to the Republican platform: “It is the duty of Congress to prohibit in the territories those twin relics of barbarism, polygamy and slavery.”

While Mormon men were able to take multiple wives, the same could not be said for Mormon women, who were not permitted to practice polyandry. There was a catch for the guys though – only those who exhibited remarkable levels of piety – and fat wallets – were worthy to practice plural marriage. Officially, the first wife also had to be on board with the idea. (Although clearly this wasn’t always the case, as with Emma Smith).

With these rules, even back then there weren’t many Mormon men with multiple wives – only an estimated 5% to 30% depending on which study you read.

Even though it was practiced by only a small percentage of church members, most of the leaders of the Church were very reluctant to let go of plural marriage as they felt it would “change the Mormon way of life.”

In fact, despite the 1890 manifesto, the practice still continued in private with certain church members and over 200 such marriages were performed over the next 14 years.

This changed in 1904 when the church once again banned the practice, under new leader President Joseph F. Smith- this time for real. Of course, there were and are still small sects that have branched off from the Mormon Church that still practice polygamy.

In the end, the decision to finally ban plural marriage seems to have resulted in a very positive outcome for the Mormon community over the course of time. The Mormon Manifesto’s order for an end to polygamy, as well as the second banning in 1904, made members of the Mormon Church more approachable to their non-Mormon neighbors, opening up a chance for dialogue and the helping establish friendships that may never have been possible otherwise.

Today, despite what you may sometimes here, the Church’s official stance on the matter is still staunchly against polygamy. As the 15th president of The Church of Jesus Christ of Latter-day Saints, Gordon B. Hinckley, stated in 1998: