’69 in Canada, Cincinnatus, Who Built the Pyramids and More, in Yet Another 10 Quick Facts 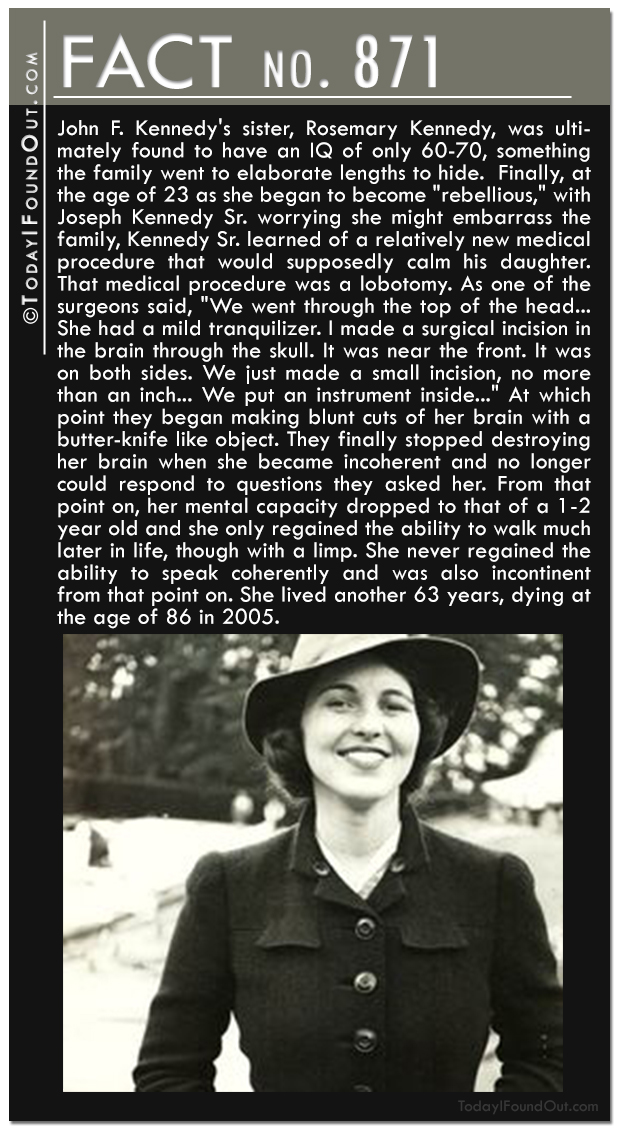 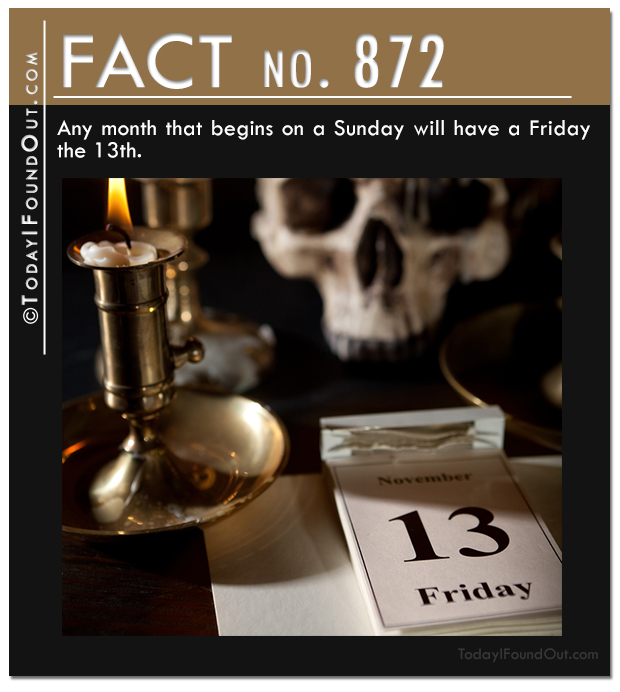 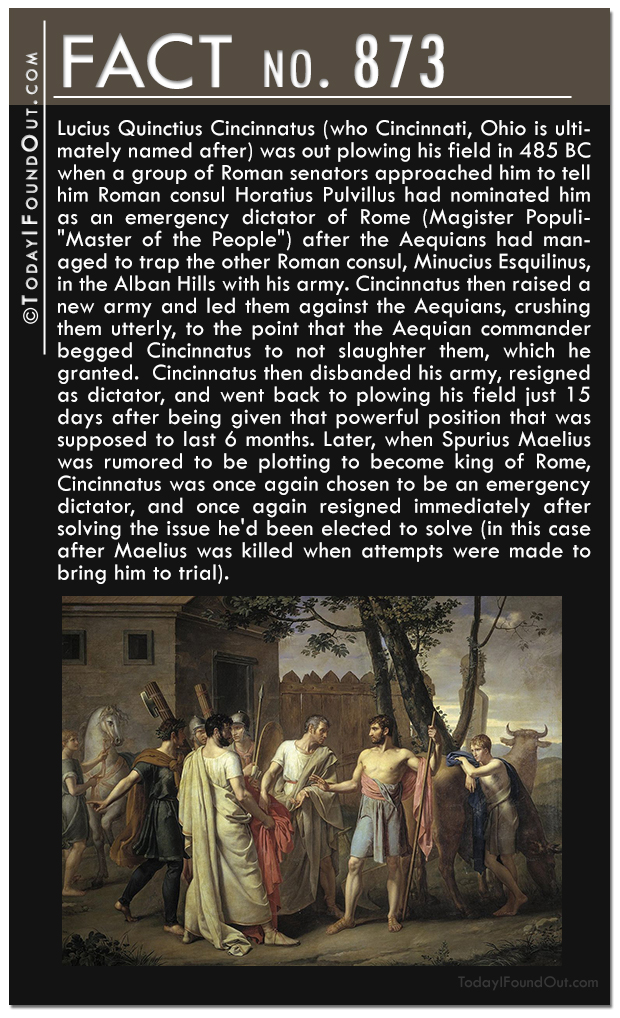 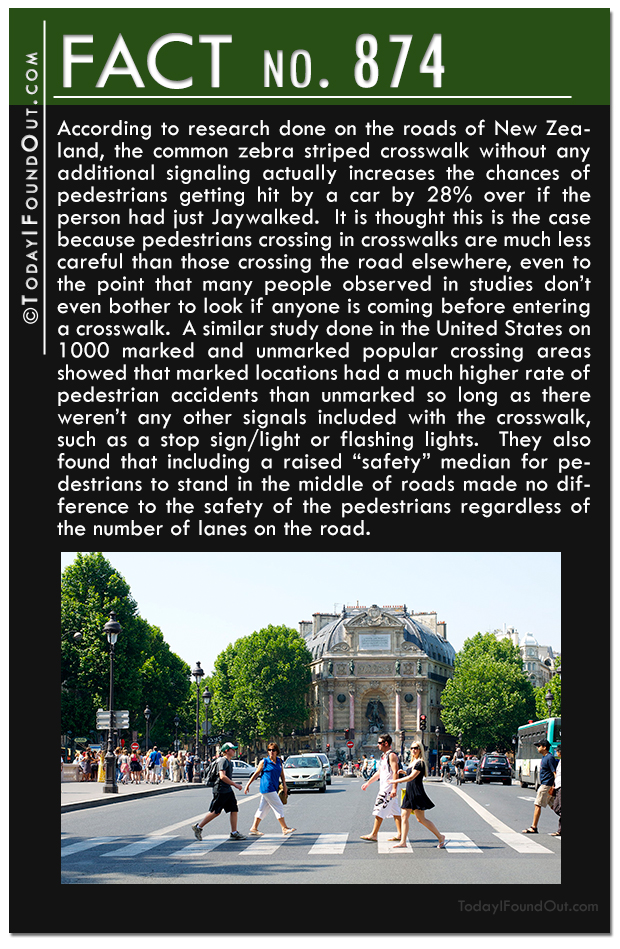 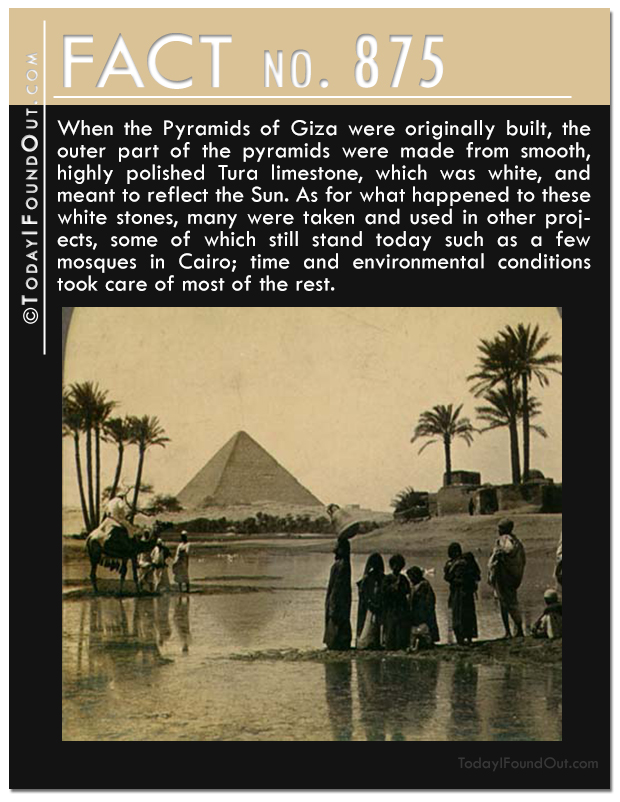 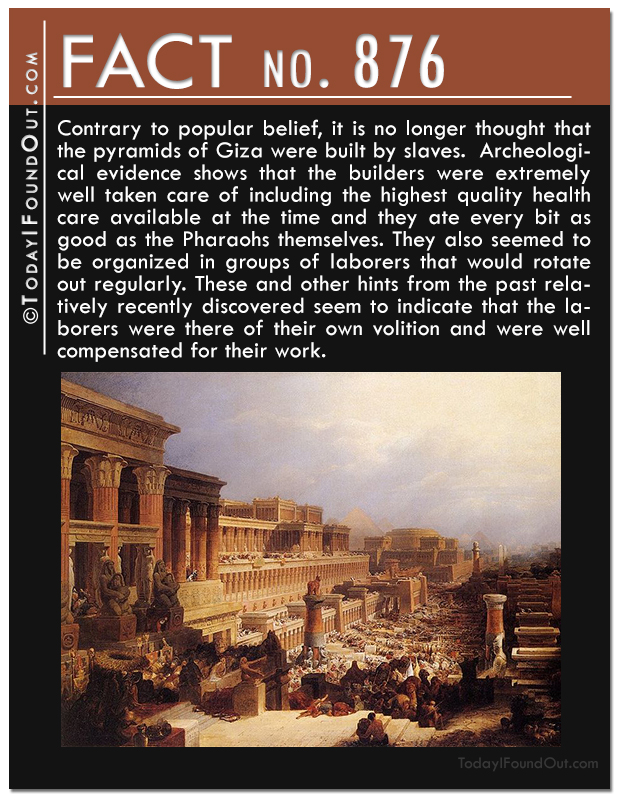 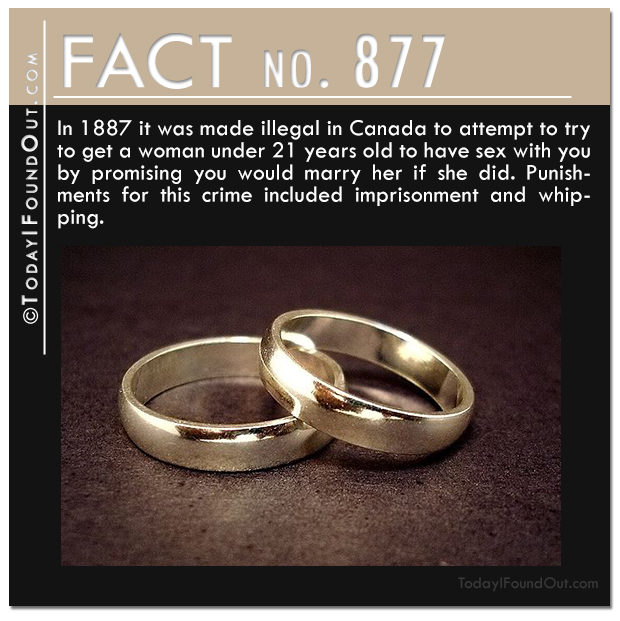 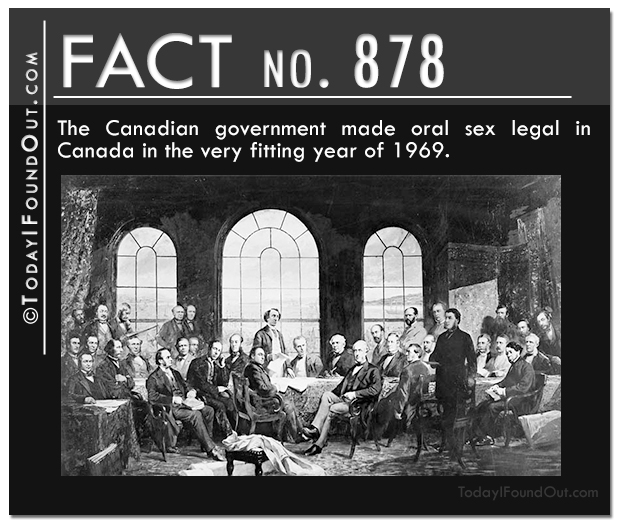 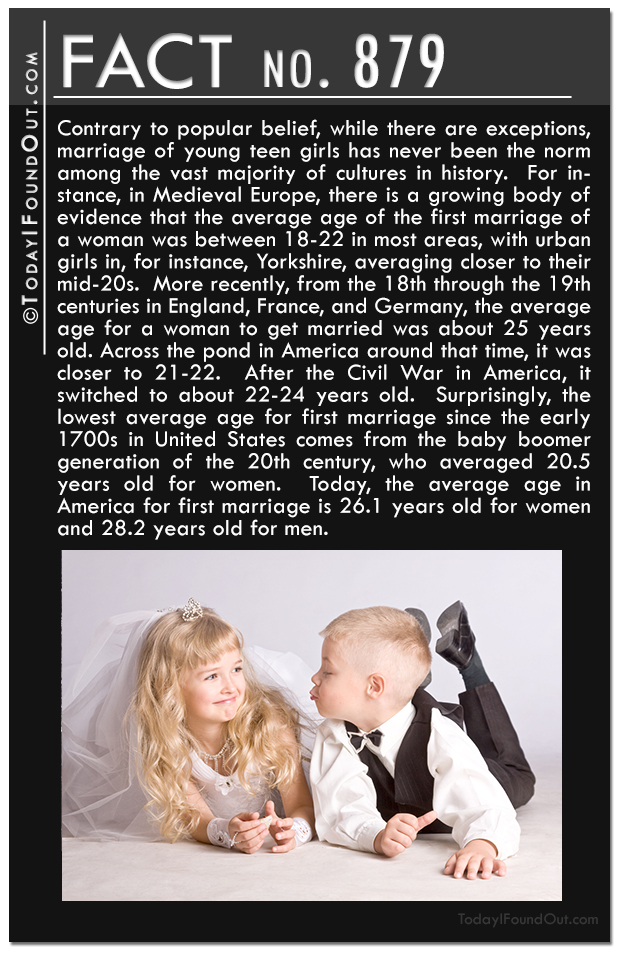 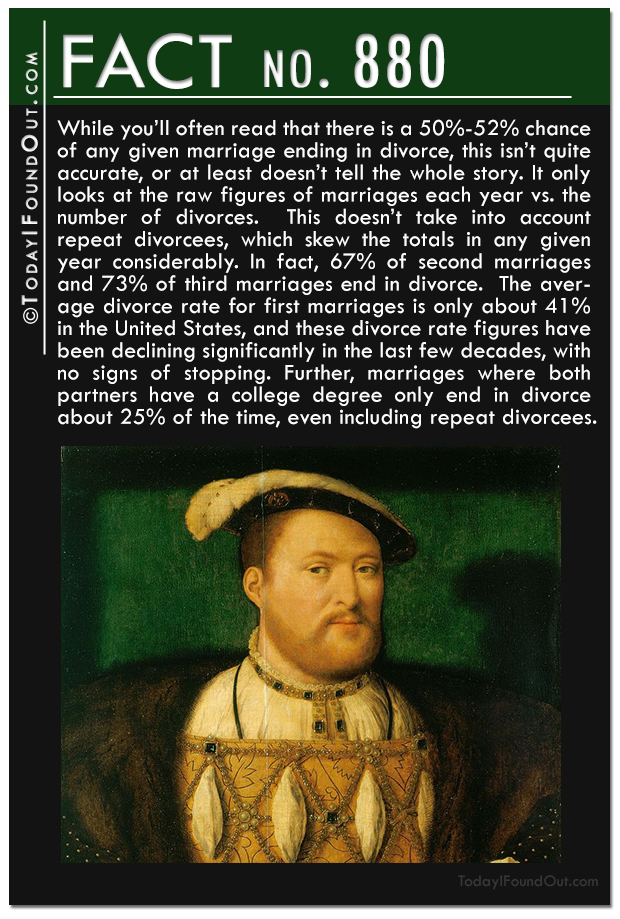 Quick Fact 871: John F. Kennedy’s sister, Rosemary Kennedy, was ultimately found to have an IQ of only 60-70, something the family went to elaborate lengths to hide.  Finally, at the age of 23 as she began to become “rebellious,” with Joseph Kennedy Sr. worrying she might embarrass the family, Kennedy Sr. learned of a relatively new medical procedure that would supposedly calm his daughter.  That medical procedure was a lobotomy. As one of the surgeons said, “We went through the top of the head… She had a mild tranquilizer. I made a surgical incision in the brain through the skull. It was near the front. It was on both sides. We just made a small incision, no more than an inch… We put an instrument inside…” At which point they began making blunt cuts of her brain with a butter-knife like object. They finally stopped destroying her brain when she became incoherent and no longer could respond to questions they asked her. From that point on, her mental capacity dropped to that of a 1-2 year old and she only regained the ability to walk much later in life, though with a limp. She never regained the ability to speak coherently and was also incontinent from that point on. She lived another 63 years, dying at the age of 86 in 2005.

Quick Fact 872: Any month that begins on a Sunday will have a Friday the 13th.

Quick Fact 873: Lucius Quinctius Cincinnatus (who Cincinnati, Ohio is ultimately named after) was out plowing his field in 485 BC when a group of Roman senators approached him to tell him Roman consul Horatius Pulvillus had nominated him as an emergency dictator of Rome (Magister Populi- “Master of the People”) after the Aequians had managed to trap the other Roman consul, Minucius Esquilinus, in the Alban Hills with his army. Cincinnatus then raised a new army and led them against the Aequians, crushing them utterly, to the point that the Aequian commander begged Cincinnatus to not slaughter them, which he granted.  Cincinnatus then disbanded his army, resigned as dictator, and went back to plowing his field just 15 days after being given that powerful position that was supposed to last 6 months. Later, when Spurius Maelius was rumored to be plotting to become king of Rome, Cincinnatus was once again chosen to be an emergency dictator, and once again resigned immediately after solving the issue he’d been elected to solve (in this case after Maelius was killed when attempts were made to bring him to trial).

Quick Fact 874: According to research done on the roads of New Zealand, the common zebra striped crosswalk without any additional signaling actually increases the chances of pedestrians getting hit by a car by 28% over if the person had just Jaywalked.  It is thought this is the case because pedestrians crossing in crosswalks are much less careful than those crossing the road elsewhere, even to the point that many people observed in studies don’t even bother to look if anyone is coming before entering a crosswalk.  A similar study done in the United States on 1000 marked and unmarked popular crossing areas showed that marked locations had a much higher rate of pedestrian accidents than unmarked so long as there weren’t any other signals included with the crosswalk, such as a stop sign/light or flashing lights.  They also found that including a raised “safety” median for pedestrians to stand in the middle of roads made no difference to the safety of the pedestrians regardless of the number of lanes on the road.

Quick Fact 875: When the Pyramids of Giza were originally built, the outer part of the pyramids were made from smooth, highly polished Tura limestone, which was white, and meant to reflect the Sun. As for what happened to these white stones, many were taken and used in other projects, some of which still stand today such as a few mosques in Cairo; time and environmental conditions took care of most of the rest.

Quick Fact 876: Contrary to popular belief, it is no longer thought that the pyramids of Giza were built by slaves.  Archeological evidence shows that the builders were extremely well taken care of including the highest quality health care available at the time and they ate every bit as good as the Pharaohs themselves. They also seemed to be organized in groups of laborers that would rotate out regularly. These and other hints from the past relatively recently discovered seem to indicate that the laborers were there of their own volition and were well compensated for their work.

Quick Fact 877: In 1887 it was made illegal in Canada to attempt to try to get a woman under 21 years old to have sex with you by promising you would marry her if she did. Punishments for this crime included imprisonment and whipping.

Quick Fact 878: The Canadian government made oral sex legal in Canada in the very fitting year of 1969.

Quick Fact 879: Contrary to popular belief, while there are exceptions, marriage of young teen girls has never been the norm among the vast majority of cultures in history.  For instance, in Medieval Europe, there is a growing body of evidence that the average age of the first marriage of a woman was between 18-22 in most areas, with urban girls in, for instance, Yorkshire, averaging closer to their mid-20s.  More recently, from the 18th through the 19th centuries in England, France, and Germany, the average age for a woman to get married was about 25 years old. Across the pond in America around that time, it was closer to 21-22.  After the Civil War in America, it switched to about 22-24 years old.  Surprisingly, the lowest average age for first marriage since the early 1700s in United States comes from the baby boomer generation of the 20th century, who averaged 20.5 years old for women.  Today, the average age in America for first marriage is 26.1 years old for women and 28.2 years old for men.

Quick Fact 880: While you’ll often read that there is a 50%-52% chance of any given marriage ending in divorce, this isn’t quite accurate, or at least doesn’t tell the whole story. It only looks at the raw figures of marriages each year vs. the number of divorces.  This doesn’t take into account repeat divorcees, which skew the totals in any given year considerably. In fact, 67% of second marriages and 73% of third marriages end in divorce.  The average divorce rate for first marriages is only about 41% in the United States, and these divorce rate figures have been declining significantly in the last few decades, with no signs of stopping. Further, marriages where both partners have a college degree only end in divorce about 25% of the time, even including repeat divorcees.