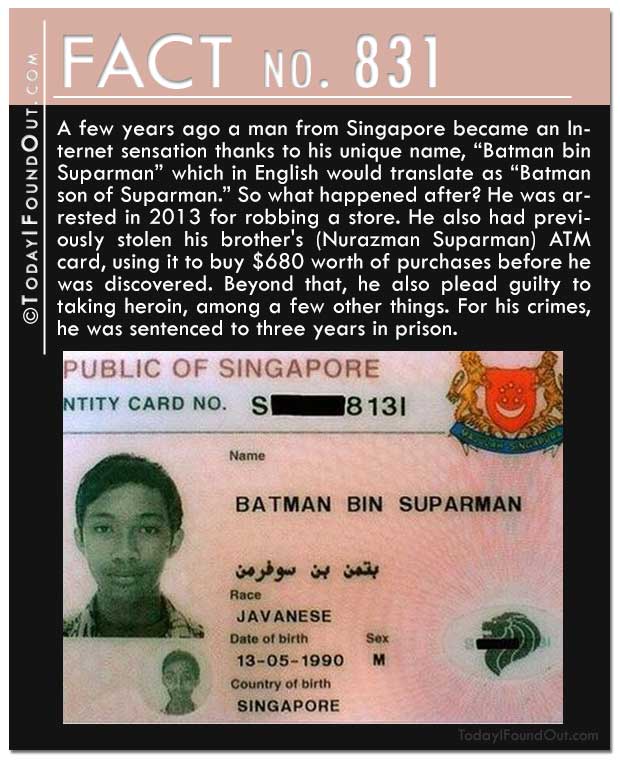 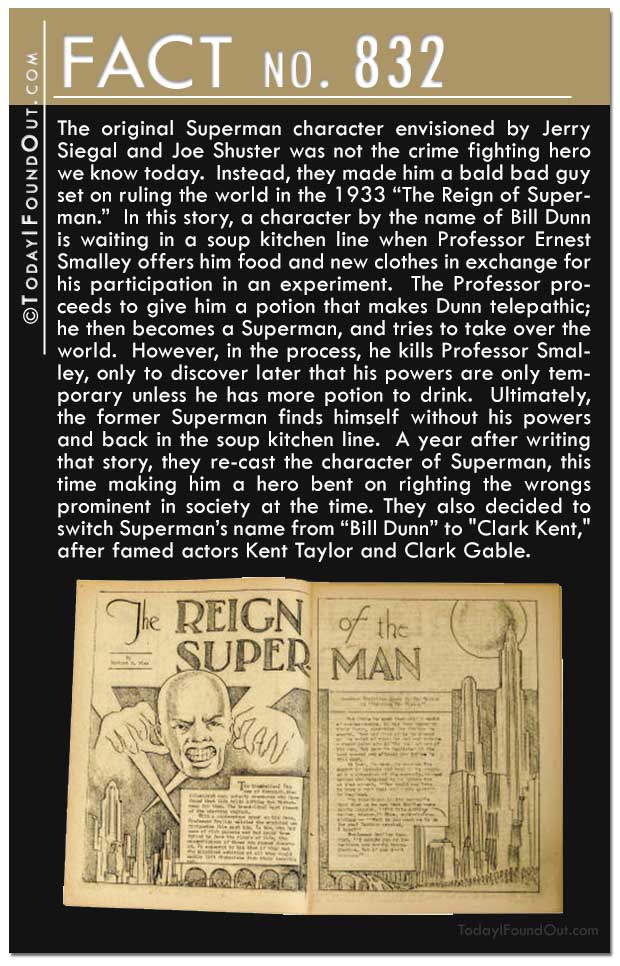 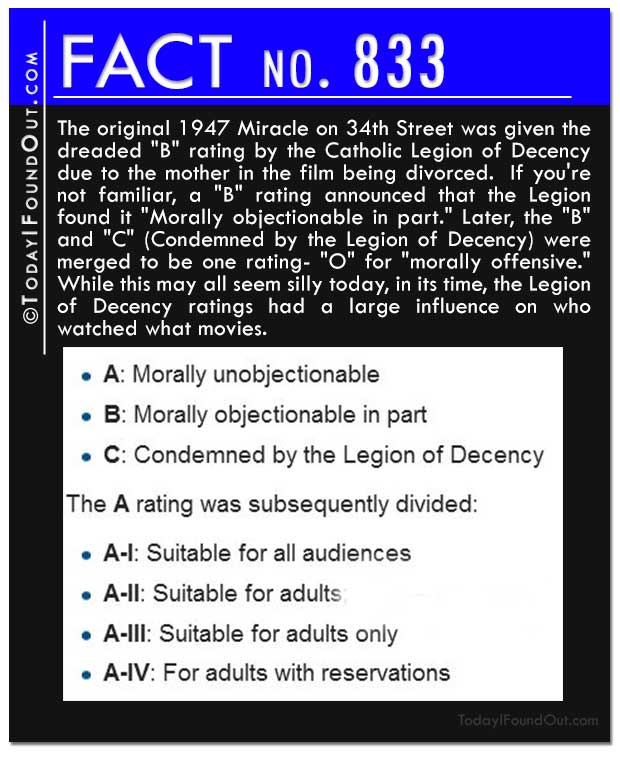 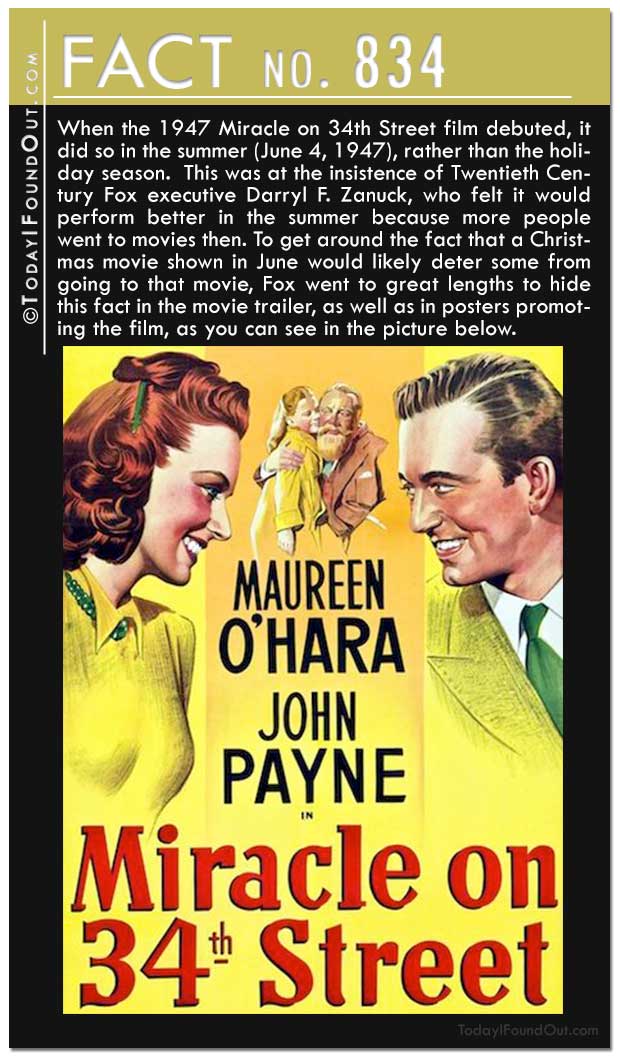 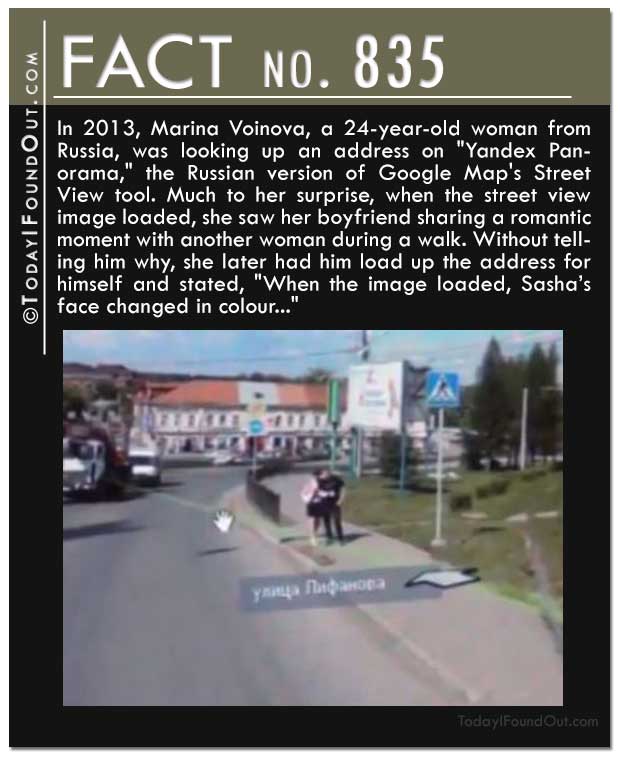 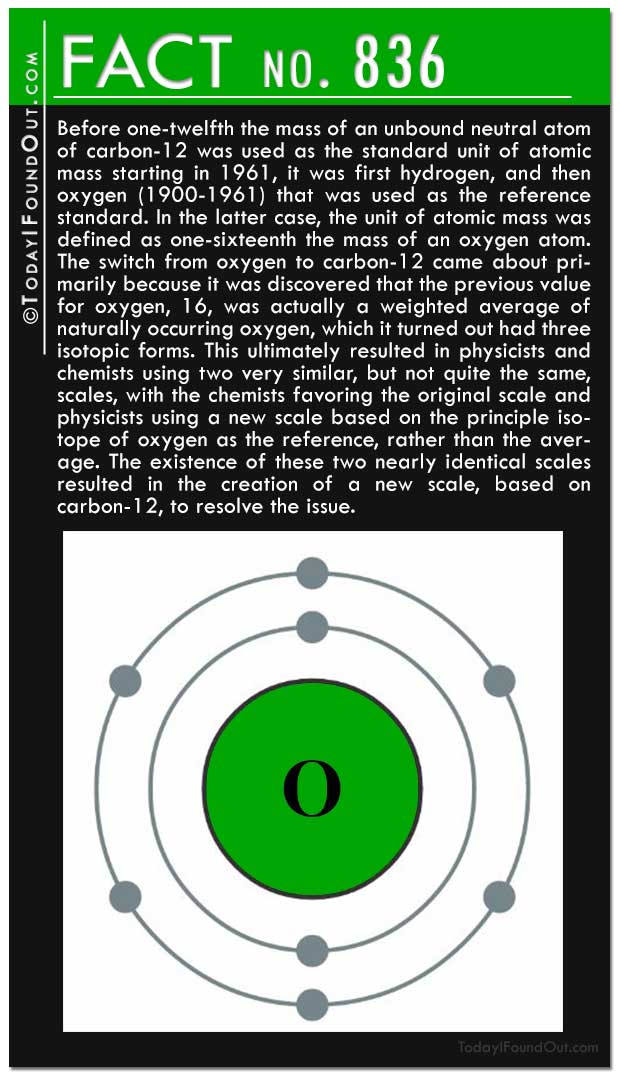 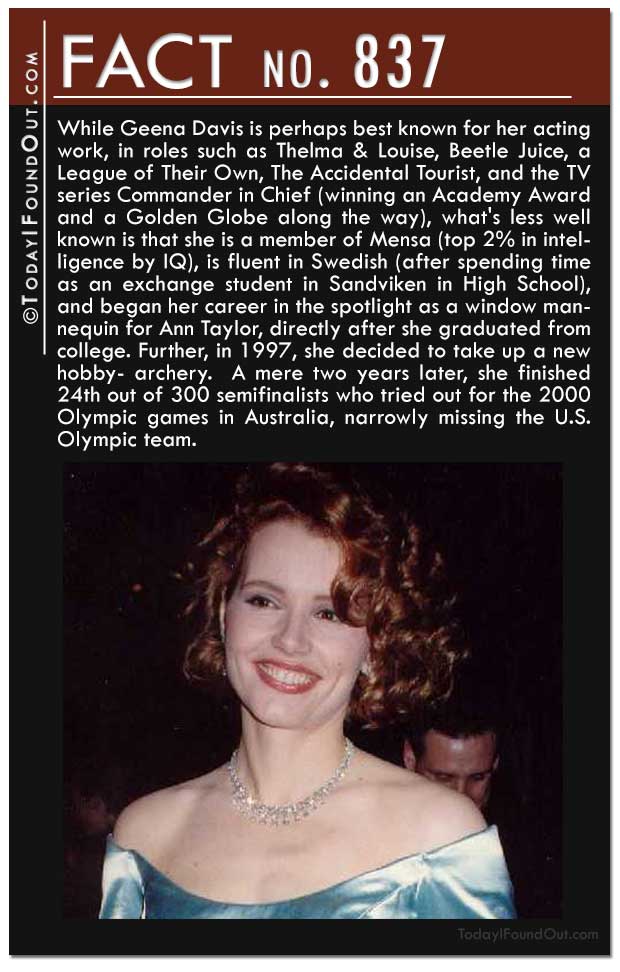 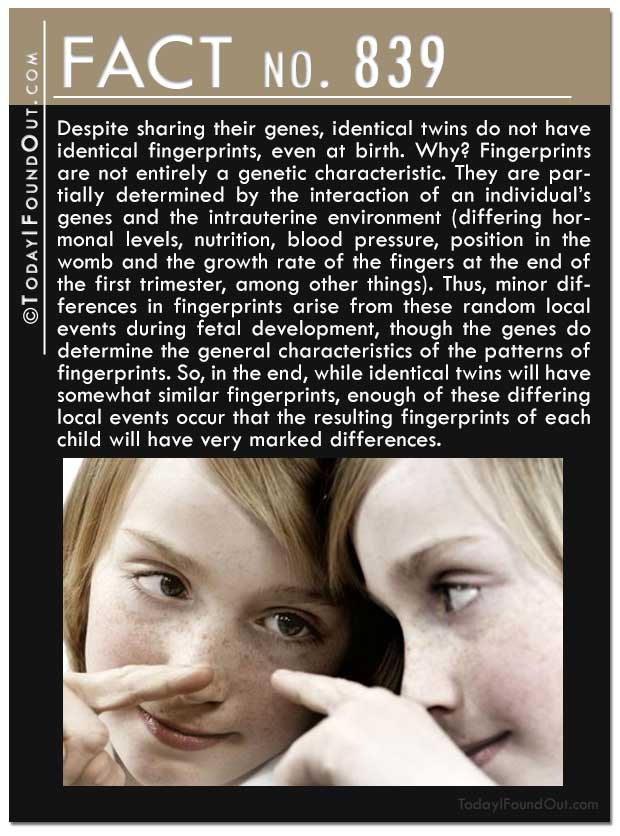 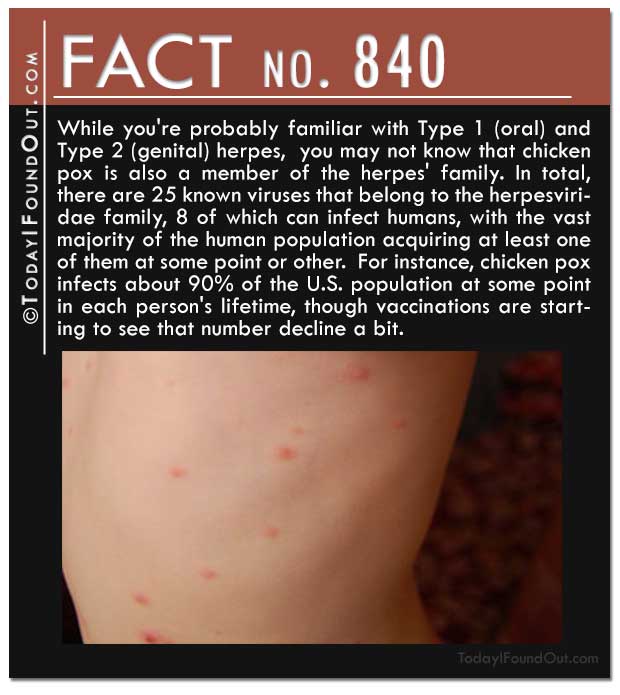 Quick Fact 831: A few years ago a man from Singapore became an Internet sensation thanks to his unique name, “Batman bin Suparman” which in English would translate as “Batman son of Suparman.” So what happened after? He was arrested in 2013 for robbing a store. He also had previously stolen his brother’s (Nurazman Suparman) ATM card, using it to buy $680 worth of purchases before he was discovered. Beyond that, he also plead guilty to taking heroin, among a few other things. For his crimes, he was sentenced to three years in prison.

Quick Fact 832: The original Superman character envisioned by Jerry Siegal and Joe Shuster was not the crime fighting hero we know today.  Instead, they made him a bald bad guy set on ruling the world in the 1933 “The Reign of Superman.”  In this story, a character by the name of Bill Dunn is waiting in a soup kitchen line when Professor Ernest Smalley offers him food and new clothes in exchange for his participation in an experiment.  The Professor proceeds to give him a potion that makes Dunn telepathic; he then becomes a Superman, and tries to take over the world.  However, in the process, he kills Professor Smalley, only to discover later that his powers are only temporary unless he has more potion to drink.  Ultimately, the former Superman finds himself without his powers and back in the soup kitchen line.  A year after writing that story, they re-cast the character of Superman, this time making him a hero bent on righting the wrongs prominent in society at the time. They also decided to switch Superman’s name from “Bill Dunn” to “Clark Kent,” after famed actors Kent Taylor and Clark Gable.

Quick Fact 833: The original 1947 Miracle on 34th Street was given the dreaded “B” rating by the Catholic Legion of Decency due to the mother in the film being divorced.  If you’re not familiar, a “B” rating announced that the Legion found it “Morally objectionable in part.” Later, the “B” and “C” (Condemned by the Legion of Decency) were merged to be one rating- “O” for “morally offensive.” While this may all seem silly today, in its time, the Legion of Decency ratings had a large influence on who watched what movies.

Quick Fact 834: When the 1947 Miracle on 34th Street film debuted, it did so in the summer (June 4, 1947), rather than the holiday season.  This was at the insistence of Twentieth Century Fox executive Darryl F. Zanuck, who felt it would perform better in the summer because more people went to movies then. To get around the fact that a Christmas movie shown in June would likely deter some from going to that movie, Fox went to great lengths to hide this fact in the movie trailer, as well as in posters promoting the film, as you can see in the picture below.

Quick Fact 835: In 2013, Marina Voinova, a 24-year-old woman from Russia, was looking up an address on “Yandex Panorama,” the Russian version of Google Map’s Street View tool. Much to her surprise, when the street view image loaded, she saw her boyfriend sharing a romantic moment with another woman during a walk. Without telling him why, she later had him load up the address for himself and stated, “When the image loaded, Sasha’s face changed in colour…”

Quick Fact 836: Before one-twelfth the mass of an unbound neutral atom of carbon-12 was used as the standard unit of atomic mass starting in 1961, it was first hydrogen, and then oxygen (1900-1961) that was used as the reference standard. In the latter case, the unit of atomic mass was defined as one-sixteenth the mass of an oxygen atom.  The switch from oxygen to carbon-12 came about primarily because it was discovered that the previous value for oxygen, 16, was actually a weighted average of naturally occurring oxygen, which it turned out had three isotopic forms. This ultimately resulted in physicists and chemists using two very similar, but not quite the same, scales, with the chemists favoring the original scale and physicists using a new scale based on the principle isotope of oxygen as the reference, rather than the average. The existence of these two nearly identical scales resulted in the creation of a new scale, based on carbon-12, to resolve the issue.

Quick Fact 837: While Geena Davis is perhaps best known for her acting work, in roles such as Thelma & Louise, Beetle Juice, a League of Their Own, The Accidental Tourist, and the TV series Commander in Chief (winning an Academy Award and a Golden Globe along the way), what’s less well known is that she is a member of Mensa (top 2% in intelligence by IQ), is fluent in Swedish (after spending time as an exchange student in Sandviken in High School), and began her career in the spotlight as a window mannequin for Ann Taylor, directly after she graduated from college. Further, in 1997, she decided to take up a new hobby- archery.  A mere two years later, she finished 24th out of 300 semifinalists who tried out for the 2000 Olympic games in Australia, narrowly missing the U.S. Olympic team.

Quick Fact 838: Wayne McLaren, David McLean, Dick Hammer, and Eric Lawson all have two major life events in common- they all at one point posed in advertising campaigns as “the” Marlboro Man, and they all died of lung cancer. Marlboro men who escaped this fate include, perhaps the most famous Marlboro Man, Darrell H. Winfield, and William L. Thourlby, the latter of which claimed he never smoked or drank in his life, despite the ads. The Marlboro Man ad campaign was created as a way to make smoking filtered cigarettes more masculine; at the time, many saw them as a feminine form of cigarettes. The ad campaign was wildly successful, and within two years of the campaign’s launch, sales were up 400%, despite growing concerns over health problems resulting from smoking cigarettes.

Quick Fact 839: Despite sharing their genes, identical twins do not have identical fingerprints, even at birth. Why? Fingerprints are not entirely a genetic characteristic. They are partially determined by the interaction of an individual’s genes and the intrauterine environment (differing hormonal levels, nutrition, blood pressure, position in the womb and the growth rate of the fingers at the end of the first trimester, among other things). Thus, minor differences in fingerprints arise from these random local events during fetal development, though the genes do determine the general characteristics of the patterns of fingerprints. So, in the end, while identical twins will have somewhat similar fingerprints, enough of these differing local events occur that the resulting fingerprints of each child will have very marked differences.

Quick Fact 840: While you’re probably familiar with Type 1 (oral) and Type 2 (genital) herpes,  you may not know that chicken pox is also a member of the herpes’ family. In total, there are 25 known viruses that belong to the herpesviridae family, 8 of which can infect humans, with the vast majority of the human population acquiring at least one of them at some point or other.  For instance, chicken pox infects about 90% of the U.S. population at some point in each person’s lifetime, though vaccinations are starting to see that number decline a bit.