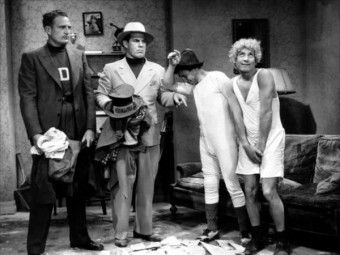 Adolph Arthur “Harpo” Marx was a brilliant, delightful, completely original comedian. Any fan of the Marx brothers and the wonderful movies (as I am) knows this. In the Marx brothers movies, Harpo played a childlike character, a kind of ethereal spirit who lived in his own world. He wore a curly wig, a big raincoat, a plug hat, and he went around honking a big taxi horn. And of course, he loved to play the harp.

Harpo never spoke in the Marx brothers films, existing as a happy-go-lucky mute in a world of voices and sound.  In real life, Harpo had a few childlike characteristics too. For instance, he was a grown man who was completely comfortable in public without clothing on (much like a young child.) This is probably why there are more “Harpo Marx naked stories” than any other comedian, a few of the more amusing of which I’ll presently share.

The first Harpo naked story involves Harpo and his brother, Groucho. Harpo and Groucho were going to attend an all-male “stag party” in a hotel. As they entered the hotel elevator, they were each carrying an empty suitcase. Why? As a gag, they thought it would be hilarious to walk out of the elevator nude and surprise the guys. Thus, they stopped the elevator and quickly undressed and put all their clothes in suitcases. However, in their excitement, they pushed the wrong floor number and walked in, completely naked, to an all-women bridal shower.

In the late 1920s, Harpo met the classic writer Somerset Maugham. As Maugham was giving Harpo a tour of his house, Harpo saw that Maugham had a swimming pool right below his bedroom window. Inspired to go for a swim, and wanting to take advantage of this excellent opportunity afforded by the house design, Harpo stripped off his clothes and leaped out the window into the pool.

During this same period, Harpo was scheduled to have dinner with the famed writer George Bernard Shaw. Relaxing before the meal, Harpo was swimming in the nude down on a beach, when he heard voices up above him. He threw a towel around himself, climbed the hill above and realized it was Bernard Shaw’s voice he’d heard. Harpo put out his hand to shake the great author’s, when Bernard Shaw got a mischievous smile on his face and snatched away Harpo’s towel, leaving Harpo standing au naturel. “From the first moment I met George Bernard Shaw, I had nothing to hide,” quipped Harpo.

When the Marx brothers were filming their movie “Horsefeathers” in 1932, they were shooting a scene featuring the movie’s big, climactic football game. After several takes, the huge stadium crowd of extras was growing restless and disinterested. “I’ll wake them up,” Harpo reportedly said. He then proceeded to take off all his clothes and ran laps around the stadium completely in the buff.

When the Marx brothers went to MGM Studios to make movies in 1935, they had a hard time getting in to see producer Irving Thalberg. Although they had scheduled meetings, Thalberg kept them waiting outside several times and the boys got fed up. Thus, they decided to sneak in when he temporarily left his office. When Thalberg returned, he discovered all three Marx brothers (Harpo, Groucho, and Chico) sitting naked on the floor of his office. Not just naked, the boys had started a little fire in the fireplace and they sat roasting potatoes over it. A good sport, Thalberg told them to get some butter from the studio commissary, which Harpo did, and they all ate the potatoes together. (It was not recorded whether Harpo put on his clothes before going to the commissary.) Incidentally, after this incident, Thalberg reportedly never kept the boys waiting again.

After Harpo married in 1936, he and his wife Susan tried to adopt children. During one adoption process, the lady who interviewed Harpo and his wife rubbed Harpo the wrong way. He may have been offended by her anti-semitism, but Harpo, uncharacteristically, was very angry. On the next scheduled meeting, she came to the Marx household and rang the doorbell. Naturally, Harpo answered the door completely naked, but with a bow tied around his manhood. For the record, though, the couple were able to adopt four children, Minnie, Alex, Jimmy, and Bill.  When asked how many children he was going to adopt, Harpo stated, “I’d like to adopt as many children as I have windows in my house. So when I leave for work, I want a kid in every window, waving goodbye.”

In his later years, Harpo lived a happy life of semi-retirement in palm springs. Harpo loved to play golf in the palm springs heat (in fact when he died his ashes were sprinkled over the seventh hole’s sandtrap at the Rancho Mirage golf course). It should be noted, though, that his golf routine was quite unusual, but fitting. The elderly Harpo loved to play a bit, then strip off all his clothes and jump into the nearest palm springs swimming pool to refresh himself from the desert heat. He’d dress himself again and play a few more holes before repeating. Harpo’s Palm Springs neighbors, aware of their aged uninvited “pool guest”, never complained. It seems everyone knew Harpo and loved him for his unique eccentricities.

Speaking of golf, one of Harpo’s goals towards the end of his life was to make the first naked hole-in-one. He would bring a bucket of golf balls, take off all his clothes, and hit them, one after the other, toward a hole. Unfortunately, in spite of his trying and trying, he fell short (supposedly within a foot on one shot) of achieving his naked golf ambition.