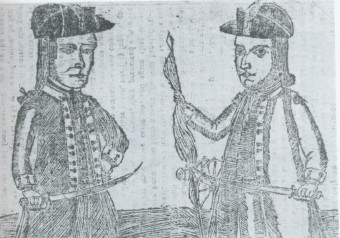 Shays’ Rebellion was the result of the farmers in central and western Massachusetts, who were already barely eking out a living, being pushed to the brink by the tax and debt-collecting policies set by politicians back east in Boston. Unimpressed by the fact that the rural settlers did not use paper money and instead primarily relied on the barter system and could not pay with hard currency even if they had it, they were intent on taking what little property the rural settlers had.

Many of these farmers had fought in the Revolutionary War (“no taxation without representation” and all that). Now they faced the loss of their farms and imprisonment because they lacked the means to pay their taxes. And once they lost their land, they also lost their right to vote, with the full knowledge that the politicians responsible for their misery were living large off the proceeds from their foreclosed properties.

Why did they risk their necks to fight a war against England, sometimes free of charge no less, only to be put under virtually the same yoke, but with a different name?

One of these farmers was Daniel Shays, an American Revolutionary war veteran from Pelham, MA. On August 29, 1786, he led a well-organized group of at least 1,500 men, most former soldiers, to the courthouse in Northampton. They prevented the justices from entering so no more foreclosures could be finalized, and no more debtors could be imprisoned.

Other armed groups did the same in numerous towns across the region. In early September 1786, Massachusetts governor James Bowdoin called in the Worcester militia. Located in central Massachusetts, Worcester also was predominated populated by farmers. They refused to answer the governor’s call.

The Feds shot the governor down as well. Under the Articles of Confederation, Bowdoin’s request for federal funding for military operations to quell the rebellion was denied. So in November 1786 the governor suspended the writ of habeas corpus, meaning the state could detain any suspects indefinitely. In addition, that January Bowdoin coaxed legendary Revolutionary War General Benjamin Lincoln to head a 3,000 man army to defeat the rebel forces.

Daniel Shays and the other farmers saw these actions as outright tyranny and claimed the right to overthrow a government intent to oppress them.

On January 25, 1787, Daniel Shays and about 1,500 other men stormed the Federal Arsenal in Springfield, MA in an attempt to capture it. General Lincoln had been alerted to the plan thanks to an intercepted communiqué, so thwarting the take-over attempt and chasing the rebels back to Petersham was a piece of cake. Lincoln’s troops showed up for a surprise visit on the morning of February 4, 1787, complete with four cannons, and the rebels scattered.

In May 1787, John Hancock became governor of Massachusetts. Although he was a wealthy Boston city boy, he was smart enough to grasp that to keep the peace and rev up the economy, he had to pacify the country folk out west. Laws were put into place to reduce court fees and provide relief for overburdened rural debtors.

Shays’ Rebellion also made it painfully clear how inadequate the Articles of Confederation were and with it how pitifully weak the federal government was, which led to the drafting of the Constitution.

And Daniel Shays himself? He lived in Vermont for a time before moving to western New York. He was given a pardon for his participation in the rebellion, and a pension for his service in the Revolutionary war. Daniel passed away on September 29, 1825, when he was 78 years old.