A Brief History of Pi 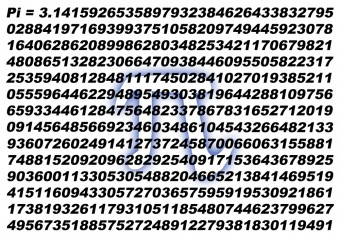 That the ratio of the circumference of a circle to its diameter is constant has been known to humanity since ancient times; yet, even today, despite 2000 years of thought, theories, calculations and proofs, π’s precise value remains elusive.

By the 17th century B.C., the Babylonians had a relatively advanced knowledge of mathematics, that they memorialized into complicated tables that expressed squares, fractions, square and cube roots, reciprocal pairs and even algebraic, linear and quadratic equations.

It should come as no surprise, then, that these math whizzes had also discerned an estimate of π at:

This is pretty good, considering they were counting on their fingers – one theory for the development of Babylonian mathematics, which worked on a base 60 numeric system, was that they used the 12 knuckles of the fingers (not counting the thumb) multiplied by the five fingers of the other hand. Nifty.

Contemporaneous with the Babylonians, the Egyptians were also making great strides with mathematics, and are believed to have developed the first full-fledged base 10 number system.

The oldest evidence of π in Egypt is found in the Rhind Papyrus, which dates from about 1650 B.C. Together with instructions for multiplication and division, and evidence of prime numbers, fractions and even some linear equations, the Egyptian π was calculated as

When the Hebrews were building the Temple of Solomon around 950 B.C., they recorded its specifications, including that of a large brass casting as described in I Kings 7:23: “Then he made the molten sea; it was made with a circular rim, and measured 10 cubits across, five in height and thirty in circumference.”

Note that the ratio between the circumference and the diameter is 3. Not terribly precise, but also not bad, considering they had only emerged from the wilderness a few centuries before.

The Greeks greatly advanced the study of mathematics, and particularly the field of geometry. One of their earliest quests, dating back to at least the 5th century B.C., was to “square the circle” – create a square with exactly the same area as a circle. Although many tried, none were quite able to accomplish the feat, although the reason why was not explained for another 2000 years.

In any event, by the 3rd century B.C., Archimedes of Syracuse, the great engineer and inventor, devised the first known theoretical calculation of π as:

At this point, Archimedes’ calculation is around 3.1418, by far the closest approximation up to this point.

About 400 years later, another Greek, Ptolemy, further refined the estimate of π using the chords of a circle with a 360-sided polygon to obtain:

Dating back to 2000 B.C. and built on a 10 based, place value system, Chinese mathematics were well developed by the 3rd century A.D. when Liu Hiu, who also developed a type of early calculus, created an algorithm to calculate π to five correct decimal places.

Working in the 9th century A.D., Muhammad Al-Khwarizmi, widely credited with creating two of algebra’s most fundamental methods (balancing and reducing), the adoption of the Hindu numbering system (1-9, with the addition of a 0) and the inspiration for the words algebra and algorithm, is said to have calculated π accurately to four decimal places.

Several hundred years later, in the 15th century A.D., Jamshid al-Kashiintroduced his Treatise on the Circumference in which he calculated 2 π to 16 decimal places.

From al-Kashi’s time through to the 18th century, developments related to pi generally were limited to producing ever more precise approximations. About 1600, Ludolph Van Ceulen calculated it to 35 decimal places, while in 1701, John Machin, who is credited with creating better methods for approximating π, was able to produce 100 digits.

In 1768, Johann Heinrich Lambert proved that pi is an irrational number, meaning it is a real number that cannot be written as a quotient of integers (recall Archimedes’ calculation, where π exists between two quotients of integers, but isn’t defined by one).

There was a π lull again, until finally, in the late 19th century, two more interesting things happened: in 1873, William Shanks correctly calculated pi to 527 places (he actually produced 707, but the last 180 were wrong), and in 1882, Carl Louis Ferdinand von Lindemann proved, in Über die Zahl, that π is transcendental, meaning:

Pi transcends the power of algebra to display it in its totality. It can’t be expressed in any finite series of arithmetical or algebraic operations. Using a fixed-size font, it can’t be written on a piece of paper as big as the universe.

Because he proved pi’s transcendence, Lindemann also proved, once and for all, that there was no way one could “square the circle.”

In the 19th century, not everyone kept up on the latest in the world of mathematics. This must have been the case with Indiana amateur mathematician Edwin J. Goodwin. In 1896, he had so convinced himself that he had, in fact, found a way to “square the circle,” that he talked a representative of the Indiana House into introducing a bill (to become a law) that his value of pi was correct.

Luckily, before the Indiana legislature got too far down that road, a visiting Purdue University professor informed the esteemed body that it was impossible to square the circle, and, in fact, Goodwin’s “proof” was based on two errors, most pertinent to this article, the error that

Cooler heads in the Senate prevailed, and the bill was set aside with one Senator remarking that, in any event, their legislative powers did not extend to defining mathematical truths.