This Day in History: April 7th 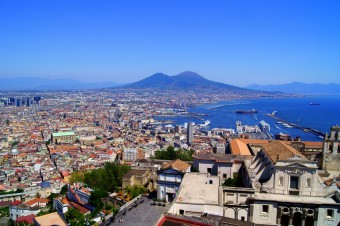 Mount Vesuvius, located on Italy’s west coast, is mainland Europe’s only active volcano. It’s considered one of the world’s most dangerous volcanoes because of the largely populated areas surrounding it, including the city of Naples. It’s estimated that two million people live in the immediate vicinity of Vesuvius. The volcano has erupted at least 50 times since it buried Pompeii in 79 A.D.

When Mount Vesuvius erupted on April 7, 1906, contemporary reports claim approximately 500 lives were lost. This eruption produced the most lava Vesuvius has emitted, but lava wasn’t the only problem. Showers of stones, cinders and ashes a foot deep collapsed roofs, derailed trains and killed people where they stood.

Incredible amounts of cinder and ashes traveled for miles, and was four feet deep in some places. This decimated the village of San Giuseppe Vesuviano, where two hundred of its 6,000 inhabitants decided not to flee, and gathered in the town’s church for Mass. The roof groaned and then caved in under the weight of the volcano’s debris, killing or injuring most present. Similar scenarios were played out in countless other towns and villages throughout the area.

The Director of the Royal Observatory in Naples, Professor Matteucci, wrote this message on April 9th:

The explosive activity of Vesuvius, which was very great yesterday and accompanied by very powerful electric discharges, has diminished. Yesterday evening and during the night the expulsion of rock ceased, but the emission of sand increased, completely enveloping me and forming a bed over ten centimetres deep, which carried desolation into this elevated region. Masses of sand gliding along the earth created complete darkness until 7 o’clock. Several blocks of stone broke windows in the observatory. Last night earthquake shocks were stronger and more frequent than yesterday and displaced the seismic apparatus. Yesterday afternoon and this morning torrents of sand fell. While I am telegraphing, several balls of tire rise without rumbling from the enlarged crater and the new crevasses.

So what is being done to prevent future disasters from occurring?

The Italian government does have an evacuation plan in place, admittedly based on many highly variable factors, so there are also concerted efforts being made to reduce the population living in the “red zone.” A national park has been established around the upper flanks of Mount Vesuvius, and financial incentives are offered to those willing to move from the area. (How much incentive do you need??)

At the present time, government officials estimate it would take approximately one week to evacuate the 600,000 residents living in the volcano’s red zone. The goal is to reduce this time to 2-3 days over the next 20-30 years.