This Day in History: April 23rd 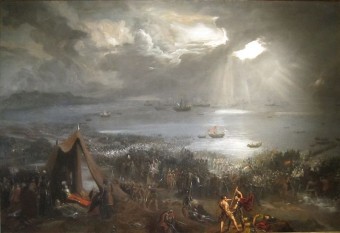 The Battle of Clontanf was not a heat-of-the-moment type event. Instead, is was the result of two centuries of broken treaties, misalliances, dirty dealings and general loathing between the native Irish Celtic chieftains and the Norsemen who had invaded and settled in Ireland two hundred years earlier.

The Vikings arrived on the shores of the Emerald Isle and plundered its monasteries for their gold, priceless manuscripts and other valuable items before gradually establishing settlements of their own and engaging in trade with the Irish. The Irish may have traded with the Vikings, but that didn’t mean they didn’t resent their presence. This was especially true in Munster, where their king, Brian Boru, had engaged and defeated the Vikings several times over the years.

Aside from booting the Norsemen, King Brian Boru’s other goal was to unite all the Celtic kingdoms under the rule of one High King – himself. No small task, as all the chieftains warred with each other almost as much as they did with the Vikings. Eventually he made top dog, and in 1002 Brian Boru was crowned as Ireland’s High King in Munster’s ancient capital, the Rock of Cashel.

King Boru did much to repair the damage wrought from the Viking pillagers by rebuilding ruined churches and ordering overseas searches for lost books, chalices and other stolen items. King Boru also introduced many useful laws to his country. One of the most noteworthy, and useful, was the fixing of surnames. (During the 10th, 11th and 12th centuries the use of surnames had become commonplace in Europe, though most surnames derives from titles or places. In Ireland, surnames derived from the originator of the particular clan.)

Even with all the good that King Brian Boru did, there were a few Irish kings that had submitted to his rule with extreme reluctance, and Mael Morda, King of Leinster, was one of them. In 1013, he joined forces with the Vikings living in Dublin and revolted against the High King. The Vikings called in help from their buddies as far away as Normandy and even Iceland.

Everything came to a head on Good Friday, April 23, 1014. Being a good Irish Catholic boy, King Brian Boru was reluctant to go to battle on Good Friday. Nevertheless, the 84- year-old king rode before his assembled army clutching a crucifix in one hand and a sword in the other, delivering a brief but fiery speech to his troops just before they engaged the enemy.

The battle commenced at dawn, and the Celts and Vikings were locked in bloody blur of spears, battle-axes and swords all day. Contemporary reports describe the scene as “a spirited, fierce, violent, vengeful and furious battle.” It’s estimated that each side may have lost as many as seven thousand men out of roughly 20,000. The battle was long and ferocious, but was also the greatest victory of King Brian’s reign. However, he barely had time to savor his triumph before he was killed in his tent by a Viking from the Isle of Man named Brodir.

Brian Boru is celebrated as an Irish hero, and many historians agree with this assessment. It’s true that the Vikings remained in Ireland after his death, but their military power in the region was destroyed. From this point on, they began assimilated with the native Irish, and there were no further Viking offensives.

Power in Ireland reverted back to the Irish kings, and, for better or worse, Ireland never again had one Ard Ri (High King).