This Day in History: March 4th 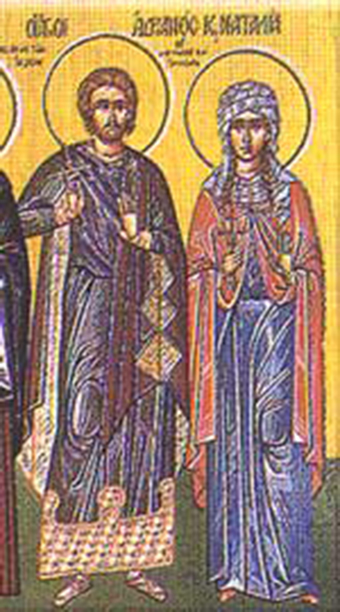 Back in the 4th century, the story goes that there was a 28 year-old high ranking Herculean guard working for the Roman emperor Galerius Maximian named Adrian of Nicomedia. While at work one day presiding over the torture of a bunch of Christians, Adrian asked them what they expected to receive in an afterlife to make all of this misery and pain worth it. The story goes that they told him, “Eye hath not seen, nor ear heard, neither have entered into the heart of man, the things which God hath prepared for them that love him.”

What they told him struck such a nerve with Adrian, and he was so impressed by his prisoners’ bravery, that he immediately professed himself to be a Christian and quit his day job. When Emperor Maximian summoned him and asked him if he’d gone nuts, Adrian assured him, “I have not lost my mind, but rather have I found it.”

His boss said OK, it’s your funeral (literally), and had him tossed in the pokey.

When Adrian’s wife, Natalia, heard the news that her husband was incarcerated awaiting certain execution, she was super-psyched. You see, Natalia was herself a closet Christian, and the knowledge that her hubby was going to suffer and die for Christ gave her a major case of the prouds.

She hied herself to the prison and supposedly told Adrian that, “You are blessed, my lord, because you have believed in Christ. You have obtained a great treasure. Do not regret anything earthly, neither beauty, nor youth, nor riches. Everything worldly is dust and ashes. Only faith and good deeds are pleasing to God.” All well and good Nat, but you’re on the other side of the bars, aren’t you? (We also note here, that she doesn’t seem to have seen the need to profess her Christianity publicly at this point to join her husband on the chopping block.)

As with most Christians at the time who were caught by the Romans, Adrian was put through unimaginable agonies before he was executed the next day. An anvil was brought to the jail so his limbs could be broken to the point that they literally fell in bloody chunks from his body. To help him face his ordeal, Natalia asked the executioner if she could place her husband’s limbs on the anvil herself. (You have to seriously wonder about this woman.)

Finally, mercifully, Adrian was beheaded on this day in history, 303. His body was taken with the remains of several other martyrs to be burned. But a thunderstorm came through, dousing the flame and even supposedly electrocuting several of the executioners. Natalia took advantage of the chaos and snatched the bludgeoned hand of her dead husband.

Needless to say, the accuracy of the above story is up for debate.  Nevertheless, Saint Adrian today is the patron saint of soldiers, arms dealers, butchers, epilepsy, and the plague.

As for Natalia, , who was also canonized by the Eastern Orthodox Church, worn out from all her “suffering,” she supposedly died peacefully in her sleep.